Evan Morgan’s “The Kid Detective” takes place in a funny world we rarely get to laugh about. Willowbrook is a small town where everyone seems to know each other, and wacky crimes sometimes involving the Red Shoe Gang ensue. A time capsule was stolen; a school fundraiser box went missing. Such mysteries were solved by the town’s more bizarre fixtures, a young sleuth named Abe Applebaum, who earned his own office downtown, a sense of celebrity, and free ice cream for life from the local candy shop, Hepburn's. But like footage of the town's sporadically mentioned, legendary potato festival, the jokes that should be here are missing.

It’s a fitting setting for such a quirky dirge that knows what can be funny, but doesn’t follow up on it. At the beginning, Morgan’s script looks at the sweetness of youth through a hot shot teen detective who was taken seriously by kids and adults like. Abe used to offer a service from a treehouse (until someone chopped it down, one of the movie’s few funny asides), somewhere between the Lucy’s psychological advice in “Peanuts” and calling the police. He's solved over 200 cases.

Things changed for Abe and Willowbrook years ago when his assistant Gracie, the mayor’s daughter, disappeared. Young Abe took on the responsibility of the case and failed his community, a disappointment that has become compounded with his fragile ego and disinterest in growing up. Years later, Abe gets an unexpected shot at redemption with his first murder case, which is brought to him by a high schooler named Caroline (Sophie Nélisse). Her boyfriend was murdered, and the case puts Abe back on the beat of interviewing goofy teenagers, a web of pills, candy bars, secret crushes and more. Even with all of these initially wild pieces, the personalities are fairly plain, and the mystery feels largely inconsequential.

Maturity and Gracie’s case have hit Abe hard, and Brody plays the character with a constant lackadaisical haze, shuffling through a mission that he cares about, for a job that's still cartoonish. He’s haunted by being a has-been, and yet the character doesn’t give us much in the present aside from letting us know he knows the “old tricks,” like questions that can get people to reveal more than they intend. Especially as the script presents many opportunities to highlight his deluded ego with Nélisse tagging along with his investigations, it falls flat. It’s more that Abe becomes the straight-man to a script that can’t figure out just how funny it wants to be.

This is a movie in which the score doesn’t just add flavor, it presents the style that the filmmaking doesn’t have, just so you don’t mistake the genre. As sauntering drum brushes and piano ditties accompany Abe and Caroline's clumsy inquiries, “The Kid Detective” makes crystal clear that this is a noir, something the cinematography could have done more with. The imagination is lacking too: it’s a town that enables its own kid detective, and yet the world-building for this old-fashioned town comes mostly from the whimsical lyrics of Nancy Sinatra's “Sugar Town,” which bookend the movie.

In his directorial debut, Morgan shows an intriguing ambition for do-or-die, slow-burn comedy with sequences that wind up for a long time and then suddenly end. This happens at least twice. A bit about Abe’s dangerous closet-hiding skills is kind of amusing, especially as the story commits to it. But when it comes to making it all count with a punchline, it's a clumsy bid on a single big laugh it doesn't get.

While the script could use some punching up with the scenarios it clearly does want to be funny, it does show some skill in how Morgan connects these various different pieces of Abe’s broken life, related to its broader themes of resisting time or being stuck in it. The ending tries to hint at something deeper about Abe's relatable existence; the final shot in particular is a moment of welcome, bitter weirdness that doesn't redeem everything before it.

There’s certainly something admirable in navigating this inherent premise of arrested development with something more serious and grounded (for a much sillier approach, check out Donald Glover in the underrated “Mystery Team”). And yet the approach here seems counter-intuitive. Even with so much in the set up, "The Kid Detective" struggles to give us a mystery, a hero, or even a good laugh. 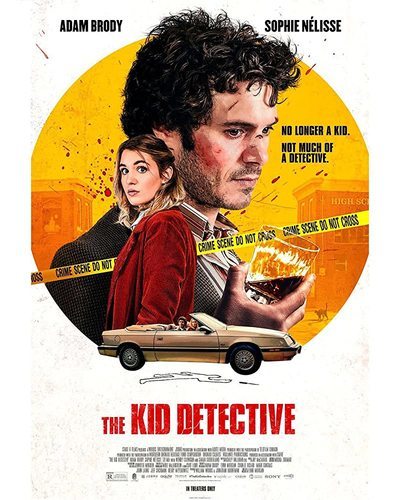 Rated R for language, drug use, some sexual references, brief nudity and violence.