Believe it or not, “The Big Lebowski” isn’t the biggest influence on “The Jesus Rolls,” the long-delayed spin-off film that features John Turturro in the role of Jesus Quintana from that Coen brothers hit. In a truly unexpected decision, Turturro, who also wrote and directed the movie, chose to use Bertrand Blier’s 1974 film “Going Places” as his major influence, so much so that Blier's script gets a credit (and it was originally called "Going Places" before Screen Media renamed it). “Going Places” starred Gerard Depardieu and Patrick Dewaere as a couple of guys gallivanting around France, committing enough crimes that it became something of a cult item despite controversy in its home country. So, Turturro took one cult classic from 1974 France and threw it in a blender with a cult classic from 1998 Los Angeles, likely considering that both films have an episodic, free-flowing structure and would blend well. Turturro has also shown a taste as a director in films like “Romance and Cigarettes” and “Fading Gigolo” that could be called European. And it’s not hard to think that there could be an interesting remake of “Going Places” or an interesting spin-off “The Big Lebowski” to be made—it’s just that this film doesn't work as either.

Almost as if he has a checklist for fans of “Lebowski,” Turturro quickly ticks off references and plot points from the brief role of Jesus Quintana in the first act of his new film. It practically opens explaining away one of the tougher parts of adapting this character in that he’s known to be a sex offender—it turns out it was just a mistake at a urinal when a kid caught a look at his penis at the urinal and Jesus started talking about it instead of covering up. (Yes, we see the flashback. Yes, this was a bad idea, the first of several.) Jesus is released from Sing Sing, and the greatest hits follow. He says “Nobody fucks with the Jesus” twice. Christopher Walken, as the warden, says he’s never seen anyone lick a ball before throwing a strike. (Of course, we see him lick a ball later.) Jesus even threatens to put his gun up someone’s ass. Any tiny element of this character from “Big Lebowski” returns here, some of them more than once. When you only know a few songs, you have to play some of them a second time.

Quintana meets up with his best buddy Petey (Bobby Cannavale) after being released, and the two quickly steal a car from a hairdresser (Jon Hamm) to go see Quintana’s mother (Sonia Braga), who is a sex worker. Very early on, the comic timing is just off by an essential beat. Quintana accosts the john with his mother saying that it kind of makes him his father, and mocks his mother. Yes, Jesus is kind of a dick, and that’s part of the point, but he’s not even really a funny dick. Being an aggressive jerk really only works in small doses.

“The Jesus Rolls” is very purposefully episodic, which allows for brief interludes with familiar faces. The bulk of the movie is a road trip for Jesus, Petey, and Marie (an over-acting Audrey Tautou), who has slept with dozens of people but never had an orgasm. They roam the country in a manner that loosely ties to “Going Places” at times, but "The Jesus Rolls" mostly struggles to find an identity that feels fresh while also rekindling something fans liked from this character’s origin. It’s purposefully shambolic, but requires a tighter hand than one might think in terms of writing and directing. It’s hard to make a movie about annoying wanderers interesting, engaging, or realistic—three words no one would use to describe this film.

“Going Places” was about two young guys against the establishment—“The Jesus Rolls” is about two old guys who don’t fit in anywhere. That's a big difference in what’s being sold, and Turturro as writer, director, and actor can’t figure it out either. The film shifts tonally on a dime in ways that neither of its inspirations did, and often feels clunky in terms of writing and editing. Lines and scenes don’t match up right, as if the hang-out nature of the movie extended to all elements of the production.

Within all of this narrative apathy and scenes in which Bobby Cannavale screams about his injured balls lie a few decent moments and performances. Susan Sarandon shows up to give a melancholy performance as a woman just released from prison who is seduced by the boys, and Pete Davidson later appears as her son. And there’s one bowling scene in which Quintana busts a move and brings the movie to life. It turns out that the main lesson here is that Jesus Quintana shouldn’t be going places outside of the bowling alley. 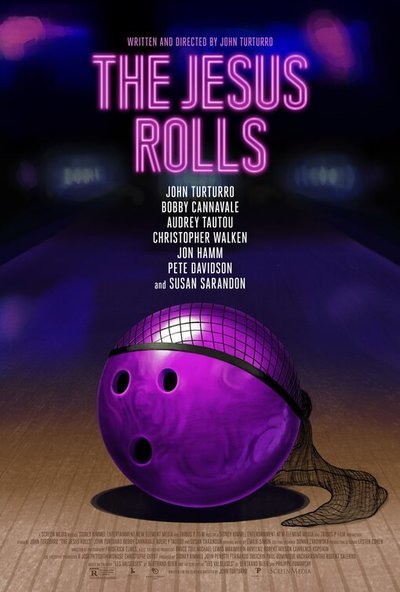 J.B. Smoove as The Mechanic

Writer (based on stories and characters by)