"Adore" is, as my late mother would say in describing Sidney Sheldon novels, "good trash."

Shooting in vivid 35mm Cinemascope, director Anne Fontaine exquisitely depicts an otherworldly coastal wonderland: a nook of New South Wales, Australia, that is so secluded and idyllic, it's as if the rules of civilized society don't apply there. It's just sun, sand and surf, with seemingly no responsibilities—all of which lead the gorgeous occupants of this Shangri-La to behave badly.

But! The people playing them are esteemed actresses: Naomi Watts and Robin Wright. And the adapted screenplay comes from a respected writer: Christopher Hampton (who won an Oscar for adapting "Dangerous Liaisons"). The pedigree of the players partly obscures what tawdry guilty pleasure the film is.

Watts and Wright co-star as Lil and Roz, respectively: best friends who've frolicked on these shores and shared secrets since their earliest days of childhood. Now in their mid-40s, they remain as close as ever. They both stayed in their hometown and live just a couple doors away from each other in stylish beachfront homes.

In a neat parallel, their children have grown up as best friends, too. Lil's son, Ian (Xavier Samuel), and Roz's son, Tom (James Frecheville), run along the same sliver of sand and ride those same pounding waves. Fontaine reflects the passage of time and ritual from one generation to the next through a series of clever, elegant edits.

Cut to the present day. The boys are now men of about 20. The mothers and sons frequently hang out together, enjoying drunken dinners on the deck and dancing as the sun sets. Lil's husband died when Ian was just a boy and Roz's husband, Harold (Ben Mendelsohn), is away for weeks at a time teaching drama at Sydney University. (Mendelsohn, a versatile character who often brings a sense of danger to his roles, doesn't get much to do here.)

But these long evenings have more than a whiff of a double date; you can sense the leering and longing as the mothers comment that their sons are like gods wandering among us (a line taken from the Doris Lessing novella that inspired the film). And indeed, these young men are handsome, muscular creatures, full of pectorals and promise, often photographed without shirts.

You can see where this is headed.

Roz's fling with Ian begins quite organically in the middle of the night during one of the usual sleepovers that occur when one son passes out at the other's house. Tom, meanwhile, initiates his affair with Lil out of spiteful revenge—but the interlude quickly turns into something more.

They all know that this cross-generational swapping is wrong;  "We've crossed a line," Lil says to Roz in a laughable bit of understatement. And yet… and yet! It can't be wrong when it feels so right, to borrow from Debby Boone. There's no room for kidding here, though; Fontaine treats the love scenes—and the relationships as a whole, which go on for a couple of years—with a seriousness that eventually morphs into melodrama.

"Adore" is decadent fantasy fulfillment masquerading as a declaration of feminist independence. Somewhere in here is a message about the importance of remaining sexy and vital in your 40s—about asserting your own identity once more after decades of being defined as someone's wife and someone's mother. The blonde and athletic Lil and Roz have a vibrancy about them that's inspiring—and a similarity in appearance and demeanor that could make them sisters, adding just enough of an implied incest factor to make "Adore" that much ickier.

Still, it's rare to see such stories of mature women's needs told on screen with such intimacy and tenderness. Watts and Wright bring great dignity to the roles as well as a relatable vulnerability, as their characters acknowledge that time is gaining on them. It's easy to see what inspires them to take this risk, easy to see how alive the affairs make them feel. (The sons' motivations are murkier, since the characters are interchangeably hunky.) 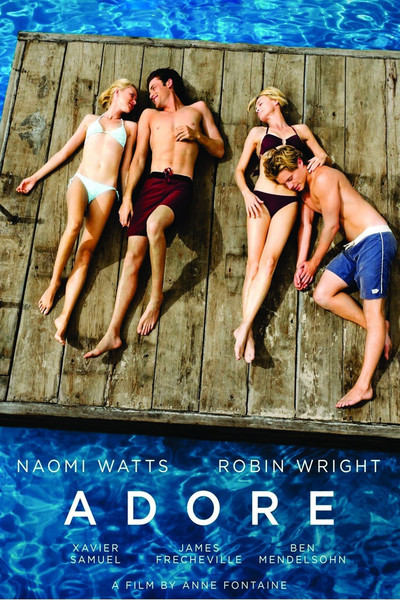