Almost a hundred years ago, Charlie Chaplin made a movie called "The Immigrant" (1917) where his Little Tramp character gives a surreptitious kick up the backside to an official who is herding together immigrants on Ellis Island. No such satisfying rebelliousness is allowed for Ewa (Marion Cotillard), the heroine of director James Gray’s fifth film, as she lands with her sister Magda (Angela Sarafyan) on Ellis Island in 1921. Ewa is Polish and Catholic, and her religion gives her the strength and the detachment to meet any and all difficulties. Magda is taken away from Ewa and quarantined for tuberculosis. Bruno (Joaquin Phoenix), a low-rent stage impresario, stealthily watches this lady in distress before making his move and scooping her up. It seems likely that Bruno skulks around Ellis Island a lot waiting for ladies in distress.

Bruno puts Ewa on stage with him, and as she goes through the motions of posing for an audience, he starts to look at her with a confused and intense love that he cannot control or express. Ewa is Bruno’s opposite: she is upright, steady and distant whereas he is always violent and unexpected in his reactions. He is the irresistible force and she is the immovable object, and though she is the one who is made to suffer in "The Immigrant," Bruno is the one who suffers from a lack of self-worth and a lack of direction. No matter what bad things happen to Ewa, she always has her religion and her pride to get her through, but Bruno, it seems clear, has nothing. The way they try to reach out to each other is the crux and main drama of "The Immigrant."

The film’s period recreation of New York in 1921 is meticulously drawn in rich, dark colors and chiaroscuro displays of light and shadow. Gray is a very conscious filmmaker who lets no visual detail escape his attention, and sometimes that has the effect of making everything seem preserved in amber, or as if we are watching a dream. It might be said that he is presenting the narrative from Ewa’s point of view because the steady rhythm of the shots and framing suggest a careful controlling of what we see and what we don’t see. For instance, when the eccentric and love-struck Bruno gradually and remorsefully leads Ewa into prostituting herself for him, we see her misgivings and then her own gradual, martyred acceptance of her nearly hopeless situation in stages without ever having to see the degradation of the prostitution itself. Gray keeps that from us until a very upsetting scene where Ewa is left alone on stage by Bruno and has to endure a hailstorm of verbal abuse from the men in the audience. Gray keeps the camera tightly on Ewa’s face as she stands there and takes in the vicious, misogynist taunts from these men. Without showing us the men or showing us what they do to her in bed, Gray makes you feel the brutal assault on her dignity and the storehouse of pride she has to access to endure it.

After Ewa has been working as a prostitute for a while, she starts to look heavy-lidded and "sultry," as if she is putting on the accoutrements of a "fallen woman" without ever fully believing that it is anything more than a role. Gray has obviously watched films of the 1910s and early 1920s to feed the overall atmosphere of "The Immigrant," and this extends to the characterization of Ewa, who glows from the screen, vulnerable but rigidly un-giving, like the heroines of D.W. Griffith movies; she moves in the languid way that Blanche Sweet did when she played "Judith of Bethulia" for Griffith in 1914. With every glance she says, "You will have my body, but you will never have my soul," and that drives Bruno crazy, of course. It must drive the other men crazy, too, because they can do anything they want to her body but they can’t ever really get to her. She is spiritually off-limits, biding her time until she can get her sister out of quarantine and make a fresh start in America.

The conception of Ewa is a very old-fashioned one that dates back to Griffith and his favorite actress Lillian Gish; there hasn’t been a heroine this incredibly noble and self-sacrificing since at least the 1940s, when this kind of woman died out as a character type. Did she actually exist in life, or was a woman like Ewa only found in movies and books? That’s difficult to say, though Gray himself has said that "The Immigrant" is based largely on the remembrances of his grandparents. He has also said that the movie is somewhat autobiographical, and that makes sense, because the conflict between Ewa and Bruno exactly expresses his own divided character.

Anyone who has seen Gray in interviews or a Q&A after a screening of one of his films knows that he is an entertaining, almost Groucho Marx-like wisecracker, a sharp intellect and a lively cut-up, yet there isn’t one moment of humor in any of his five very solemn (and very touching) films. In the movies Gray makes, it is clear that he wants to be like Ewa, classically beautiful and correct and slightly above-it-all, but he knows that he is actually like Bruno, which is why he has cast the wild Phoenix in four of his five movies.

By its mid-way point, "The Immigrant" has become a love triangle between Ewa, Bruno and Emil (Jeremy Renner), a magician who gives the long-suffering heroine some hope. Emil is a movie-like figure who almost seems like he might be a figment of Ewa’s imagination until he starts to mix it up and fight with Bruno. Toward the end, a key act of violence between Bruno and Emil is witnessed by a neighbor, and this feels all too convenient for the plot (the corniness here could have been averted by just one extra shot or two of the neighbor looking and listening to their verbal fight behind her door before the actual violence occurred).

There are times when Ewa’s saintly characterization feels a bit suffocating; the film would be enriched if she was given the opportunity to express just a few human emotions of impatience, or anger, or pettiness. As it is, Ewa often seems just a little too good to be true, a Madonna placed on a pedestal. But if we can accept it on its own terms, "The Immigrant" has many moments of exceptional power and rare delicacy, none more potent than the final shot, which achieves a haunting visual balance between the characters of Ewa and Bruno that cannot be achieved for them in their interactions with each other but can be achieved through the talent and skill of the man who is behind the camera guiding and shaping and watching them. 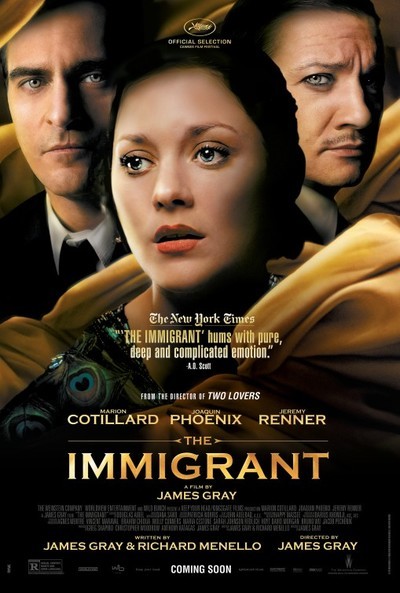 Jeremy Renner as Orlando the Magician