“The Idol” is based on the true story of Mohammed Assaf, the Palestinian singer who sneaked across borders, produced forged documents and generally defied the odds to win the second season of TV’s “Arab Idol.” The victory turned him not only into a singing sensation but also a symbol of hope for millions worldwide—whether he was ready for that kind of adulation or not.

It’s all inspiring stuff, to be sure—and often so dramatic that it’s hard to imagine it really could have happened, even though it did.

But the musical elements of the film aren’t even the most compelling parts. They’re actually surprisingly cheesy. And the way director and co-writer Hany Abu-Assad depicts them is so distractingly clunky, it takes us right out of the action, just as the movie should be building to an uplifting emotional crescendo.

Abu-Assad isn’t exactly synonymous with feel-good filmmaking. His previous movies—including “Paradise Now” (2005) and “Omar” (2013), which both received nominations for the foreign-language Academy Award—have been serious explorations of the violence and strife that plague the Palestinian region. With “The Idol,” he certainly doesn’t shy away from those realities, but he presents them—at least, at first—through the optimistic eyes of a group of children with dreams of musical stardom.

Abu-Assad devotes roughly the first half of the film to Mohammed’s youth in Gaza starting in 2005, where he’s played by sweet-faced Qais Atallah. Mohammed is part of a ragtag band with his tomboy sister, Nour (the magnetic Hiba Atallah, no relation to Qais), and two of their friends. They use makeshift instruments until they can save up enough money to buy real ones from a smuggler, and what they lack in talent they make up for in enthusiasm.  Eventually, they play their first gig at a wedding despite the disapproval of their parents, who think they should spend time on more practical pursuits, given the world in which they live as refugees. (Abu-Assad slyly inserts images in the background of people who’ve lost limbs to remind us where we are.)

But Mohammed and especially Nour have their sights set on performing at the Cairo Opera House: “We’ll be big and we’ll change the world!” they chant in their shared bedroom to pick themselves up after a low point. This is Mohammed’s story, but the actress playing Nour simply steals every moment she’s in; with her big, blue eyes, wide smile and swaggering demeanor, she’s a total spitfire. The other kids are often just plain stiff.

Then, following a family tragedy (which Abu-Assad rushes a bit), “The Idol” jumps ahead to 2012, with Tawfeek Barhom now playing Mohammed. He works as a cab driver but singing remains his passion; even if it weren’t, everyone around him constantly tells him what a God-given gift his voice is, which grows obvious and repetitive.

The series of events through which he eventually reaches the “Arab Idol” audition in Cairo—which include smuggling, sweating, sneaking past hotel security guards through the use of parkour and finally securing an audition ticket through the kindness of a stranger—sound impossible, except they actually happened. Barhom plays it all with abiding earnestness regardless of the situation, and offers little insight into any other complex emotions that might exist inside this young man.

As Mohammed rises to greatness through round after round of “Arab Idol” competition, Abu-Assad increasingly relies on archival footage to set the scene: extended reaction shots from judges, audience members and cheering crowds in Gaza streets, as well as recreated images of Mohammed’s family and friends clustered around television sets, smiling and clapping. In the most awkward of these, a childhood friend of Mohammed’s, Amal (Dima Awawdeh), watches at a hospital with the nurses while undergoing dialysis.

We see Mohammed himself, meanwhile, from far away or in brief close-up on television against a fake background. The effect is not only intentionally hilarious, it actually distances us from this figure just as he’s coming into his own and literally finding his voice. Ultimately, Abu-Assad goes full-boar on the archival images, showing us Mohammed Assaf himself during the real-life moment when he’s crowned the “Idol” champion.

It’s enough to make you wonder why the director didn’t just go ahead and make a documentary about his remarkable life instead. 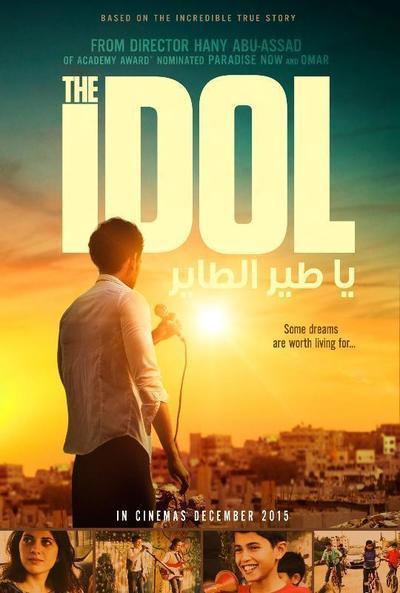