When a movie like "The Hunger Games: Catching Fire" comes along, it makes my inner feminist-leaning 13-year-old stand up and cheer. Of course, the mere existence of a successful girl-powered franchise that does not revolve around potential suitors with supernatural powers is enough to keep her smiling.

The scene in "Catching Fire" that especially fired up my lingering adolescent alter-ego? When Jennifer Lawrence—essential as warrior heroine Katniss Everdeen in Round 2 of this young-adult lit-based enterprise, much in the same way that Vivien Leigh was indispensable in "Gone With the Wind"—suddenly twirls about in her would-be wedding dress during a TV interview meant to distract the downtrodden populace of Panem. What initially looks like a multi-tiered, white-frosted cage is engulfed in flames and transforms into a supple midnight-bluish winged symbol of subversion that emulates the Mockingjay, the mascot of a growing rebellion in the land. One gown represents female entrapment and expectations, the other human freedom and opportunity. Call it a Barbie-meets-Joan of Arc moment. And not every man can rock a lavender ponytail and a pompadour at the same time, but darn if Stanley Tucci’s fawning oil-slick of a TV host Caesar Flickerman—part Ryan Seacrest, part Siegfried and Roy—manages to pull it off. "Girl on Fire is so cheeky," he declares of Katniss with a half-smile, half-sneer when she performs her dress trick.

Yes, fashion can be a weapon for good and a vehicle for revolution—at least in this dystopia, with its Fascist regime led by the serenely insidious President Snow (Donald Sutherland). Here, gawd-awful gaudy too often passes for style. We are talking about you, Elizabeth Banks, in the guise of giddy government-instated cheerleader Effie Trinket, with bedazzled Oompa Loompa wigs and eyelashes that appear to be leaden lace cookies. (At least she is allowed to be a warmer presence this time around.)

Katniss’s quick-change act is almost topped by the sight of Lawrence going full-on Liz Taylor in "Cleopatra" with Roman-circus hair and makeup, riding in a chariot before a thunderous throng and later wearing another stunning bird-inspired outfit to a pre-Hunger Games soiree. Good thing that the flinty-eyed Oscar winner is as adept at silently conveying the haunted psyche of her ace archer as she is at showcasing these fantasy frocks. Otherwise, it would be even more obvious that—just like any other No. 2 in an ongoing franchise—"Catching Fire" is merely a placeholder. And it is particularly dour experience given Katniss’s post-traumatic state of mind, as the plot simply picks up where the first movie left off and closes nowhere near to a satisfying climax.

The 2 ½-hour running time is split in two: First, we learn that Katniss’s ploy last time to upend the rules of the games so that she and faux boyfriend Peeta Mellark (Josh Hutcherson, still unduly cuddly) would both survive as co-champions has made Penam’s less fortunate think they, too, can rise against their overlords. As the supposed engaged couple go on tour to greet their fans, it becomes clear they see Katniss as an inspirational leader, a role she inch-by-inch grows to accept.

With an assist from Philip Seymour Hoffman as the too-smooth-to-be-true new gamesmaker Plutarch Heavensbee, Snow announces a special all-stars edition of the 75th-anniversary Hunger Games Quarter Quell. Former victors of previous games recruited from Panem’s 12 districts will be pitted against one another, and Katniss and Peeta must put their lives on the line again.

The last hour is devoted to an Olympian death match in a mock tropical jungle. The fun, such as it is, begins with such visually intriguing challenges as toxic mist, rabid baboons and a downpour of blood. Several welcome new battle participants come aboard. Much like Hoffman, such terrific talents as Jeffrey Wright, Amanda Plummer and Jena Malone are overqualified for their parts, but each delivers a distinctly defined character that brightens the proceedings considerably. At least Malone as the punk-cool Johanna provides Lawrence with a fierce foil to play against. The biggest and maybe only true laugh arrives when Johanna strips off her clothes in an elevator to the appreciation of Peeta and the disdain of Katniss.

Director Francis Lawrence ("I Am Legend," "Water for Elephants") is confident enough to not go too heavy on the much-disdained hand-held camerawork used by his predecessor, Gary Ross. With a script by two Oscar-winning writers, "Slumdog Millionaire"’s Simon Beaufoy and "Little Miss Sunshine"’s Michael Arndt (although credited as Michael deBruyn), the action and even the speechifying move along swiftly enough.

Yet "The Hunger Games: Catching Fire" suffers from the same “something old, something borrowed “ disease that is the enemy of originality in too many Hollywood efforts of late. It is difficult to enjoy a film when you are checking off all the sources it references—"Lost" and "Survivor" from television, Star Wars (what is with the Stormtrooper ripoffs?) and "The Running Man" from movies, and Roman and Greek myths.

What makes the books and the films compelling is the way they define anxieties and pop-culture obsessions in our everyday lives: anger over politicians, fascination with celebrities, a growing disgruntled underclass, addiction to reality shows and video games, the regularity of large-scale violent acts that monopolize TV coverage, and hateful outbreaks of bullying.

Of course, the one truly fresh invention—and the one that matters most—is Katniss herself. With each on-screen chapter, the poor girl from District 12 continues to fulfill her destiny as an inspiration and a rebel fighter. She is but one female, but she's the perfect antidote to the surplus of male superheroes out there.

And talk about a brewing rebellion: this is the rare action blockbuster that dares to make do without 3D. We who wear glasses already and would rather spend the ticket premium on popcorn salute you, Katniss and company . 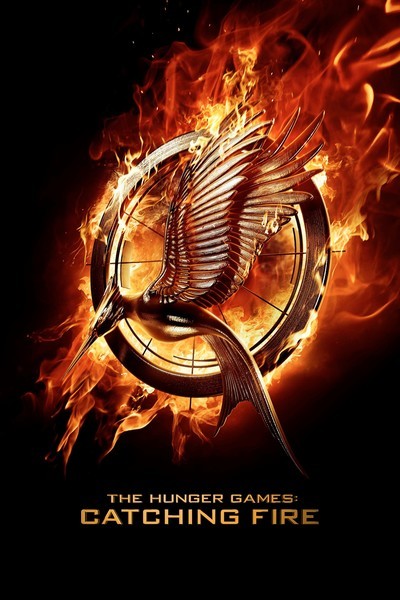