“I’m not a great man. I’m a failure, and you made me a failure.”—Bill Clinton to Yasser Arafat in January 2001

This sentiment privately expressed by America’s 42nd president turned out to be the prevailing one for much of the world following the notoriously mishandled peace talks at Camp David in July of 2000. Disgraced by the perjury scandal that led to his impeachment and determined to realize the aspirations of assassinated Israeli prime minister Yitzhak Rabin, Clinton was shattered when no peace deal was reached before the end of his second term. This debacle was widely blamed on the alleged reluctance of Yasser Arafat, chairman of the Palestine Liberation Organization (PLO), to make an agreement with Israel’s prime minister, Ehud Barak, who touted himself as a disciple of Rabin. Yet unlike his courageous predecessor, who stressed a few months prior to his martyrdom that Palestinians should have a state of their own, Barak had no interest in fulfilling Rabin’s promise to withdraw from the Golan Heights. According to Dror Moreh’s riveting new documentary, “The Human Factor,” it was hubris that led Clinton and Barak to assume they could use the strength of their personalities to get Arafat to accept an all-or-nothing deal, one that the Palestinian leader couldn’t be blamed for turning down.

It was on Moreh’s birthday, November 4th, that Rabin was fatally shot after addressing the crowd at a 1995 peace rally in Tel Aviv, eventually inspiring the Israeli cinematographer-turned-director to helm his Oscar-nominated 2012 documentary, “The Gatekeepers.” With arresting candor, the film’s previously unheralded subjects spoke candidly about their experience of heading Shin Bet, Israel’s internal security service, while illuminating how peace between Israel and Palestine has repeatedly failed to be achieved. Errol Morris’ 2003 masterpiece, “The Fog of War,” served as a crucial inspiration for Moreh, and “The Human Factor” only further affirms how he is a major talent in the mold of his hero. Eugene Levitas’ score is as entrancing as the circular melodies of Philip Glass, while the director is not above interjecting his own off-camera questions on occasion, such as when pressing the subjects on their own apparent biases. He also embraces instances of quirky humor when they emerge organically from the subject matter, such as when Arafat is caught watching “The Golden Girls.” Like “The Gatekeepers,” Moreh’s latest enthralling feature plays like an urgent thriller rather than a dry history lesson, in part because the issues it raises remain shamefully unresolved.

Serving as our storytellers this time around are six of the key U.S. mediators who have been instrumental in Arab-Israeli peace negotiations, led by the man who has been dubbed the “architect” of them, Dennis Ross, whose emotions are still wrenchingly raw when recounting the death of Rabin. Though the film purports to be about the three decades of negotiations that began at the Cold War’s end in 1991, which caused the U.S. to become the only global superpower, the vast majority of the picture is devoted entirely to the Clinton Administration, since it was during this period in which Moreh and his subjects believe that a peace deal was within Israel and Palestine’s grasp. The administrations of George W. Bush and Barack Obama pass by in a largely wordless, chillingly inconsequential montage, while the Trump Administration appears just long enough to be rightfully deemed a farce (the film premiered at the 2019 Telluride Film Festival, long before the election of Joe Biden). Functioning as a prelude of sorts is the film’s early section chronicling the successful efforts of president George H.W. Bush’s Secretary of State, James Baker, in acquiring the participation of Israeli and Arab state leaders for the first time in an international peace conference, though he too fell short of his ultimate goal.

Many of the most piercing insights in the film are shared by Ross’ Deputy Special Middle East Coordinator, Aaron David Miller, who believes that the American mediators, many of whom are Jewish, were guilty of viewing the world in the way they wanted it to be, rather than in how it actually was. He notes that he and his colleagues all too often served as Israel’s lawyer, thus alienating Arafat at the negotiating table. Clinton’s feeble post-Camp David consolation that “trying and failing is better than not trying at all” was, to Miller, better suited for a college football team, and he now believes that a new word should be used in place of “peace” so that false expectations aren’t encouraged. According to the mediators, their job is to establish a relationship of credibility and trust through a complex process of manipulation laced with empathy. It’s fascinating to learn about the countless minute details that had to be lined up perfectly in order for the Declaration of Principles to be signed by both parties on September 13th, 1993, such as Rabin’s agreement to shake Arafat’s hand as long as the Palestinian leader had no gun, no uniform (he wore a “safari suit” instead) and wouldn’t try to kiss him. To Clinton’s credit, it was under his administration that this historic mutual recognition occurred between Israel and the PLO.

By the time Rabin and Arafat signed the Oslo B Accords two years later, the body language between the pair of world leaders had warmed considerably. Easily the most joyous footage in the film is that of Rabin’s celebratory address on September 28th, 1995, where he elicited laughter from Arafat by joking that the PLO chairman was close to being Jewish, considering he excels in the Israeli sport of speechmaking. When Rabin died 37 days later at the hands of an Israeli right-wing extremist outraged by his crusade for peace, Arafat was among the heads of state in mourning. “The Human Factor” provides an essential reminder of the destruction that routinely occurs when we deny the humanity in those souls to whom we don’t see eye to eye. It’s refreshing to see a documentary populated by subjects willing to reexamine their own missteps, a theme Moreh externalizes with the immersive three-dimensional layer he gives to various still images, allowing us to view these moments frozen in time from different angles. Without quite hitting the nail on the head, Moreh makes it clear in his film’s final moments that the truths of this ongoing conflict transcend the part of the world in which it is confined. “The Human Factor” is as much about modern day America as it about Israel and Palestine, and how much we have to lose when we give into the easy temptation of demonizing those who think differently—even if it’s as a result of listening to Tucker Carlson. 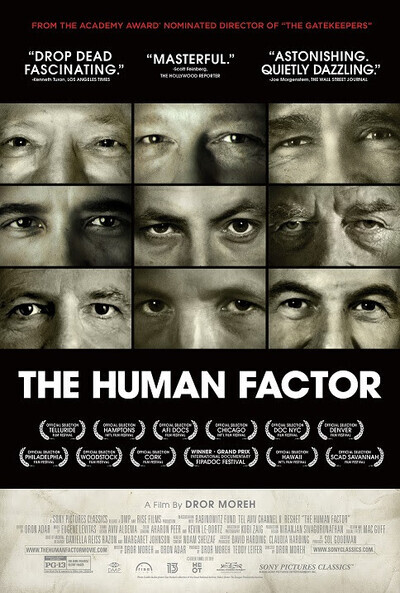