Note: Roger Ebert didn't give "Human Centipede (First Sequence)" a star rating because "The star rating system is unsuited to this film." Not much has changed, unfortunately.

"Human Centipede 3" is gross, though that's not an inherently commendable or noteworthy quality given the previous two "Human Centipede" films. You get what you pay for with this last sequel: a cynical, and consistently unpleasant film with creators who try very, very hard to push as many of your buttons as they can. One character facetiously speaks for writer/director Tom Six when he yells "I don't want anyone leaving satisfied!" This film wants to make you see red, and tries to achieve that effect through charmless shock tactics, including:

None of these pseudo-provocative techniques are that surprising given what transpired in the last two "Human Centipede" films, so it's hard to be incensed by how hard Six, who appears as a fictional version of himself in the film, works to make viewers angry. "Human Centipede 3" is so over-eager to displease that it's only ever intensely irritating.

Because "Human Centipede 3" seems to have been made by a desperate internet troll, the film's plot doesn't kick in until the movie's about halfway done. In the beginning, there's only a basic narrative set-up that's left undeveloped for a while so as to achieve maximum annoyance. Bill (Dieter Laser, the villainous mad scientist in "The Human Centipede (First Sequence)") is an inefficient and insane prison warden. To save his job and the job of his anxious accountant Dwight Butler (Laurence R. Harvey, who played the pathetic fetishist from "The Human Centipede II (Full Sequence)") from a malicious politician (Eric Roberts?!), Bill thinks he has to find a way to save the George H.W. Bush State Penitentiary from its $50 billion deficit.

So, being a raving psychopath, Bill tries to torture and scream and taunt everyone until his money problems and job insecurity are fixed. His secretary Daisy (Bree Olson) is the biggest target of Bill's ire, but he does everything to the inmates from manual castration to water torture. And yet somehow, Bill's bullying doesn't have the desired effect, and eventually the film's plot kicks in once Bill takes Dwight's Plan B seriously: forcibly attach the prison's inmates faces to each other's hindquarters, and feed them each others' excrement (also some intravenous vitamins).

I've glossed over a lot of direfully offensive material because that stuff is in fact offensive. It's also rather dumb, and predictable. The film often feels like a collection of gross stuff: testicle-eating, kidney-screwing, and oodles of un-PC taunting are standard. You don't really get the numbing pleasure of being de-sensitized as you watch "Human Centipede 3" either. Six persistently leads viewers around by the nose, throwing jokes about dried human clitorises, colostomy bags, and coerced blow jobs with noxious abandon. This is a movie that seems to sometimes exist to give Laser, a champion over-acter, countless opportunities to make all the veins in his neck, forearms, and forehead bulge while yelling bad-guy-wrestler-worthy taunts, like "Your crying only makes my dick harder." "Human Centipede 3" proves that just because it's supposed to be alienating doesn't make it interesting or noteworthy.

So while it seems besides the point to argue that there is some artfulness to the first two "Human Centipede" films that off-set their performance-art-meets-carnival-freakshow stench, the real problem with "Human Centipede 3" is how pointlessly excessive it is. Scenes where Guantanamo Bay, and American eagles are referenced in the name of provocation are wantonly juxtaposed with genuinely upsetting material, like a scene involving the aforementioned colostomy bag.

It would also be pointless to accuse Six of over-compensating (in every department) for the sake of taking more money from rubes, and boasting while he does it (check out his scintillating Twitter feed if you don't believe that Six carries himself like the horror genre's answer to Andy Kaufman). This is the first new film I've seen in a while that made me feel like it was made in the same vein as "Blood Feast," an incompetent 1963 horror film that took films from the intentionally off-putting Grand Guignol theater, and sold itself to drive-in and grindhouse attendants as "the first splatter film." "Blood Feast" director Herschell Gordon Lewis now boasts about how that terrible film (he will even tell you it's lousy) made money because it was "the first of its kind." "Human Centipede 3" is similarly a movie that's advertised and constructed to put you off, only it's far more slick, and infinitely more aggressive than anything Lewis "excreted" (his verb, not mine). If you like your sleazy exploitation films to be joyless, calculating, and obnoxious, you are the only ones who will enjoy "Human Centipede 3." 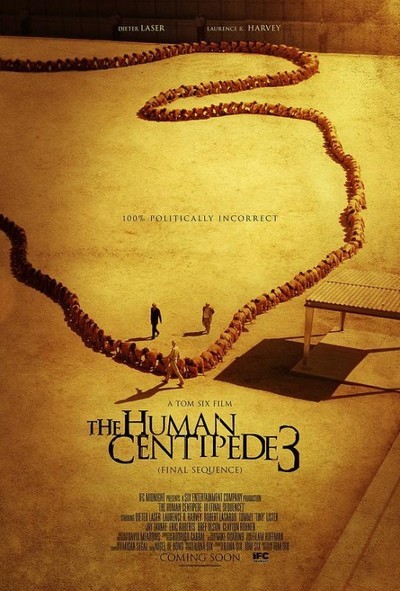