In theory, these actors should be able to just show up, be themselves, tap into their formidable improvisational abilities and let the laughs flow freely.

In reality, though, movies require scripts. They require actual characters and dialogue and narratives that evolve in ways that are logical, or at least engaging. “The House” has two credited screenwriters: first-time feature director Andrew Jay Cohen and his frequent collaborator, Brendan O’Brien, who also teamed up to write the “Neighbors” movies and “Mike and Dave Need Wedding Dates.” But the result is loose to the point of being sloppy, with allegedly wacky outtakes before the closing credits that provide a glimpse into the production process.

Ferrell and Poehler can only do so much with barely-there characters in half-baked situations. Because they hardly feel like people—about halfway through, I realized I didn’t even know their characters’ names—the extraordinary scheme they’ve concocted for themselves makes no sense and has no momentum. It also has no laughs, or at least precious few, which is why a movie with this caliber of star power is being sneaked into theaters without being shown to critics ahead of time.

Also in theory, besides being a raunchy, R-rated comedy, “The House” aims to be a movie that reflects our current economic reality, in which it’s not necessarily guaranteed anymore that our kids will go to college, build careers and establish better lives for themselves than we have. But that’s at odds with the way these characters actually live, one of the many glaring inconsistencies that plague “The House.”

Ferrell and Poehler star as Scott and Kate Johansen, nerdy suburbanites who live in a spacious home in a charming, leafy village called Fox Meadow. Their teenage daughter, Alex (Ryan Simpkins), has just been accepted to her dream school of Bucknell University. But for some reason, Scott and Kate never set aside any money for her college education; despite their well-off status, it’s unclear what they do for a living, and in an unfunny running bit, Scott is terrible with numbers. So they rely on the annual scholarship the town awards—only this year, soulless city councilman Bob (Kroll) plans to use that money for a lavish community pool.

On an ill-advised trip to Las Vegas with their gambling-and-porn addicted pal, Frank (Mantzoukas), they hatch a scheme to create an underground casino in Frank’s house. He’s in the middle of an ugly divorce, and his angry, estranged wife (Watkins) has cleared out much of the furniture, so there’s plenty of room for a craps table and a roulette wheel and such. Frank even sets up a bunch of safes for stashing the cash. Since they’re the house—and the house always wins—they should make enough money to pay for Alex’s college education in no time.

In and of itself, this is not a hilarious premise. Ostensibly, the sight of soccer moms and doughy dads showing up, letting loose and losing their money is intended to provide some knowing laughs: “It’s true! We get old and we get lame.” But “The House” escalates into such debauchery and depravity so quickly, it’s jarring, and it depletes the film of essential comic build-up. All of a sudden, the casino features a fight club between housewives in yoga pants and a spa that provides massages with happy endings. The clientele includes Wall Street blowhards doing blow on any surface they can find. And the real criminals in town, led by Jeremy Renner in an all-too-brief cameo as a mob boss, show up to shut them down.

Cohen cuts so briskly from each scenario to the next that they never register. And the most significant shift of all—the one that occurs within Scott and Kate—is the most extreme and the least plausible. Out of nowhere, she’s smoking pot non-stop and he’s reinvented himself as an enforcer known as “The Butcher.” They start wearing flashy, gangster-style clothing. And in case we couldn’t detect for ourselves that they’ve entered shady territory, the theme from “The Sopranos” plays in the background at one point.

This idea of a husband and wife tapping back into their former wild side worked much more successfully in the “Neighbors” movies—especially the first one—because they firmly established who Seth Rogen and Rose Byrne’s characters were, as individuals and as a couple, before they allowed their primal urges to take hold. Here, Ferrell and Poehler—fellow former “Saturday Night Live” cast members who also co-starred in “Blades of Glory”—barely seem to know each other, much less enjoy any sort of chemistry.

“The House” is the rare raunchy comedy that actually could have stood to be a little longer—and not just by padding the running time with outtakes. 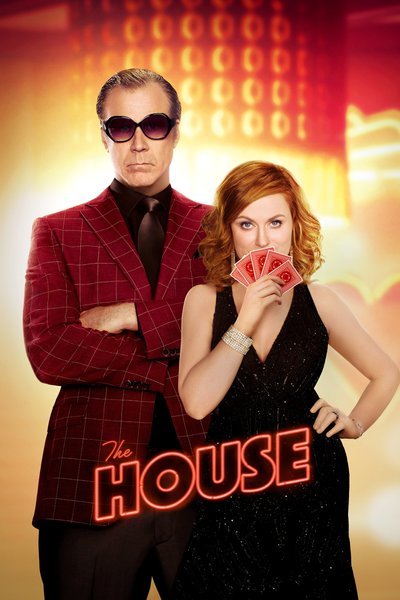 Rated R for language throughout, sexual references, drug use, some violence and brief nudity.

Will Ferrell as Scott Johansen