The Hero of Color City

A little boy named Ben goes to sleep in his room, surrounded by his toys and magnifying glass, his unfinished drawings and scattered crayons. Once his eyes finally close, the crayons pop to life. They take a roll call and then leap into their crayon box, which acts as a psychedelically-colored wormhole leading to a place called "Color City," a land populated only by crayons. Color City is so garishly colored that you ache for the grey crayon to bust a move and cover it all with fog to give your eyes a break. "The Hero of Color City," directed by Frank Gladstone, feels as though it was written by a committee, and so it's not a surprise to see five screenwriters listed in the credits. Even if you allow for the the fact that the film is geared towards the 5-year-old set, it's still a pretty dreary experience, made even more so by screamingly vivid colors, uninspiring animation and grating songs.

Each crayon has a distinct personality, and the only moments of originality emerge from those quirks. There's the lead, Yellow (Christina Ricci), who is scared of everything. Green (Jess Harnell) is a boring fuddy-duddy who pontificates about everything. Brown (Tom Lowell) is a cowboy with a thick white Sam Elliott mustache. Blue (Wayne Brady) is extroverted and confident. Red (Rosie Perez) is hot-tempered and feisty. The crayons compete over what Ben has "used" each of them for in his various drawings. Poor Black (David Kaye) is the Eeyore of the group, throwing in deadpan comments showing his bleak outlook: "All Ben ever uses me for is night." Or "Once in a while, I'm an outline." At least Black gets used. The white crayon's "head" is still a pointy tip because Ben never uses White at all!

Their nightly jaunts to Color City have seemingly no point except to hang out with their own kind. They go visit a "spa" (run by a pink crayon with a French accent) to get their tips re-shaped. They have to be back before Ben wakes up, so they cram in as much Crayon-only time as possible. But this particular trip to Color City goes awry because the crayons are followed through the wormhole by two unfinished drawings of Ben's, a giant king named King Scrawl and his flying round-bodied sidekick named Gnat (Craig Ferguson). These unfinished drawings yearn to be colored. It's not right that they remain just outlines. But the residents of Color City treat these benign creatures as horrifying interlopers, monsters that must be crushed and destroyed.

There's quite a bit of plot, and "The Hero of Color City" gets bogged down in it, lacking the imagination to create something alive. The "monsters" try to get the attention of the crayons by clogging up the Rainbow Waterfall, the source of all the color in Color City. The situation is dire. Without color, who would the crayons be? Of what use will they be anymore if they fade? They band together and set out on a "Heart of Darkness" type journey on a boat, to bring down the monsters causing so much trouble. What is the story here? Not the plot, but the story. It seems that "The Hero of Color City" wants, ultimately, to be about how Yellow has to stop being "yellow", get over her fear of everything and rise to the occasion courageously. Will she succeed? Will she fail? But Yellow isn't a character. She's just a character trait. And the film doesn't give the journey (actual and emotional) any sense of high stakes. It's all just one thing happening after another, interspersed by chirpy repetitive songs.

All of the characters are so one-note that the movie becomes formulaic almost instantly. Some big event goes down, and inevitably we get Yellow cringing in the corner, Blue cracking a joke, Black moaning about how they are all doomed, Red making some feisty comment, and Brown trying to round them all up with a lasso of commands. One need only consider "Toy Story"—with its depth of characterization, its life-or-death stakes, and age-appropriate humor that ends up working for all ages—to remember that films for children do not need to be so simplistic. 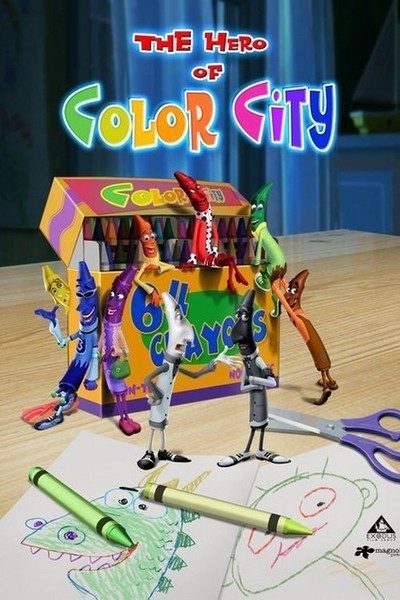