On April 10, 2010, the Deepwater Horizon oil rig exploded in the Gulf of Mexico, killing 11 workers on the rig, and dumping what amounted to almost 5 million barrels of crude into the gulf. The leak continued without interruption for 87 days, devastating the Gulf coastline, its wildlife, its beaches and its entire fishing industry (the main source of income for many in the bayou). BP's lack of response to the initial spill brought ferocious criticism to the company. BP tried to pass the blame off onto Transocean, the company to whom they leased the rig. Years have passed. Many who have put in claims to BP for financial compensation have yet to see any cash. Just last month, however, a federal judge stated that BP was the one most responsible for the spill, and the company could be looking at fines of up to $18 billion. Even in the oil industry, that is a lot of money. Margaret Brown's documentary "The Great Invisible" personalizes the well-publicized event, bringing us close to those affected by it, fishermen, survivors and seafood workers: the "invisible" victims of the massive catastrophe. Winner of the SXSW Grand Jury Prize for Documentary, "The Great Invisible" is strongest when it focuses on the micro rather than the macro. How the spill impacted individuals in the region is the real story of "The Great Invisible."

Brown hails from Alabama, and her wonderful 2008 documentary "The Order of Myths" was a full-immersion look at Mobile's long-standing Mardi Gras celebration (one for whites, one for blacks). It was territory Brown knew well (her grandfather was interviewed for the documentary), and the film felt personal and confident. "The Great Invisible" lacks that intimacy, and the fact that BP refused to participate in the making of the documentary inhibited Brown's approach. Her only "way in" was through the residents of the bayou and those who had worked on the rig. These are touching interviews, mixed with footage from news stories about the spill, and C-Span footage of hearings in the U.S. House of Representatives, where one of the oil company CEOs admitted point-blank under tough questioning, "We are not well-equipped to handle" spills. All of this was well-documented at the time, the BP spill dominating the news for weeks. There aren't any revelations in "The Great Invisible", in terms of how poorly the spill was handled, and how badly the region was impacted. That was front page news. The aftermath lingers, however, and "The Great Invisible" is an urgent reminder.

Brown's gift is in the interviews she gets, which include a grieving father whose son was killed in the explosion and two oil rig workers who now suffer from a variety of maladies, including PTSD and depression (one guy pulls W. Somerset Maugham's "The Razor's Edge" off of his crowded bookshelf and explains that he had read it in college, but now he really "vibes" to it in a different way because of what he has gone through). Brown also interviews many seafood workers in Bayou La Batre, the seafood capital of Alabama. The shrimp boat captains, the workers who crack open oysters, the ones whose livelihood dried up post-spill…these are the front-line witnesses to the financial impact. These details provide texture and understanding of the area. One small boy, seen in a classroom discussion about the spill, talks with some hurt about "everyone up in the Northern states" who have no concept of just how bad it is down there.

The most interesting man we meet is Roosevelt Harris, a seemingly full-time volunteer for a local church, who collects donated food and drives it around to those in need. He is a one-man charity organization. He cooks up spaghetti, knowing that he may need to feed 300 people. If there is any information to be imparted about BP's compensation plans, he is the one who spreads the word. Roosevelt drives through an area called Hardluck City, where people live in trailers, tents, old school buses, old boats. These people are off the grid, poverty-struck, desperate, proud. One guy has nailed up a sign on the side of his trailer: "Nothing left to steal." Roosevelt is a talker, entertaining and informative, supportive and optimistic, although at one point he admits to the camera, "Alabama's my home state but I declare I wish I been born somewhere else." If there is a hero in "The Great Invisible," Roosevelt is it. He does good because someone has to do good in this world. It feels good to help others. Roosevelt understands the social contract.

The closest Brown gets to the oil industry is showing the massive oil conference that occurs every year, with CEOs and executives descending on Houston from all over the world to present the latest technology, hob-nob, and bask in their own reflected glory. It's an interesting glimpse into a world rarely seen. A group of executives go out for seafood, drink Scotch, smoke cigars, and talk about oil. The conversation they have is fascinating, as they address the problem of consumers wanting cheap gasoline, and the challenges of the industry as a whole. We are all a part of the oil problem as it exists currently, and these guys know that, and speak knowledgeably about it. Brown chooses to film their conversation in a pretty heavy-handed way, with closeups of cigar smoke and platters covered in delicious-looking shellfish, with the Houston skyline in the background. It is impossible to look at these guys and not contrast it to the residents of Hardluck City, but it would be a mistake to dismiss their commentary entirely.

The ending of "The Great Invisible" leaves one with a hopeless and enraged feeling, a sense that BP has escaped responsibility entirely, that nothing has changed and another catastrophic spill is inevitable. The ruling in September 2014, declaring BP the main culprit of the spill, could be a watershed moment. BP has contested the ruling, and there will be a lengthy appeals process, but no one can say now that BP has escaped responsibility. United States Attorney General Eric H. Holder Jr. said in response to the ruling, “We are pleased. The court’s finding will ensure that the company is held fully accountable for its recklessness." Let's hope. 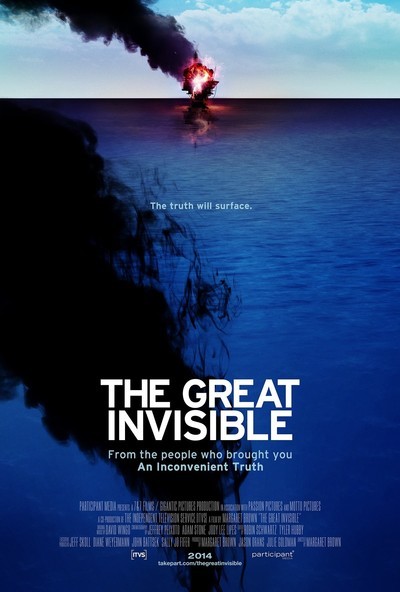