I understand enough of the arch, but uninspired Taiwanese black comedy "The Great Buddha+" that I can't help but feel underwhelmed by it. That’s a miserable feeling, because it's a movie I'd been looking forward to since the announcement of its initial (and immediately delayed) American release back in February. But here it is, “The Great Buddha+,” a stiff, unyielding parable about a bunch of amiably doofy factory workers who step in it but good when they discover, through dash-cam footage, that the local Buddha factory's boss likes to pay prostitutes for sex. A good part of the film’s meaning is in its title, albeit in a characteristically vague, pseudo-poetic way: the film was "expanded," in the words of writer/director Hsin-yao Huang, from a 2014 short film (and boy, does it show) called "The Great Buddha" because Huang began working on his relatively new feature at the same time that the iPhone 6+ was released. That Wiki-friendly bit of trivia (not an exaggeration) says a lot about "The Great Buddha+," an ideologically sympathetic movie that nevertheless uses a very boring approach to rail against unchecked political and capitalist corruption.

"The Great Buddha+" doesn't have much of a plot since its narrative's shapelessness is ostensibly a political statement unto itself. We follow security guard Pickle (Cres Chuang), his frenemy Belly Button (Bamboo Chu-sheng Chen), and fairweather companion Sugar Apple (Shao-Huai Chang) as they watch dash cam footage of smug big-wig Kevin Huang (Leon Dai), the pseudo-benevolent owner of a Mercedes Benz (ooh la la) and a factory that produces gigantic brass Buddha statues. Also, depressed convenience store clerk Peanut (Na-Dou Lin) is sometimes there, too (he works on “Savon,” a rip-off of “Seven-11”). Pickle and the gang's anglicized names say a lot, albeit indirectly, since they’re essentially a too-blunt-to-be-clever commentary on the way that industrialization reduces people to snacks and/or a cutesy body part that we associate with, well, navel-gazing. But I'm getting off-topic, even if I suspect that that's the point of thinking about "The Great Buddha+:" to let your mind wander, since that's the most human reaction of all, blah blah blah.

The first 60 minutes of "The Great Buddha+" concern Pickle and the gang's slack-jawed, unhurried surveillance of Kevin through dash-cam footage (from Kevin's Benz) that they stumble upon. This dash-cam footage is presented in color while the rest of "The Great Buddha+" is in black-and-white. Filmmaker Huang laconically explains this difference through self-deprecating, but intrusive (and frankly unnecessary) voiceover narration. So: Huang’s petty, but harmless proles watch dash-cam footage of Kevin, a wealthy, connected muckety-muck, have sex. That situation is inherently surreal, though Pickle and his buddies' dry, Jim Thompson-worthy commentary adds an extra layer of absurdity, like when Sugar Apple observes "Your boss turns into a real p---y when he's on the phone," to which the too-meek-to-inherit-anything Pickle replies "Don't badmouth people like that."

At about the hour mark, the proverbial waste hits the fan, though Huang anti-climactically tells us, both visually and through voiceover, what will happen before then: a member of Pickle’s group is killed and the local cops use heavily edited dash-cam footage to make it look like an accident. Now Huang's focus on dash-cams—as a testament to the human spirit’s encroaching degradation—starts to make sense. The lazy pacing, the black-and-white footage, the cartoonish drawl of Huang's voiceover narration: all of this is a rebellion against the way that dash-cam footage and other too-neat "images" are used to narrativize and reduce the complexity of modern life to a highlight reel.

Which may sound good, but "The Great Buddha+" is one of those movies that's much more rewarding to think about than it is to watch. I predict that it will be the subject of dozens of media studies papers, all of which put in in the context of modern Taiwan and its complex post-industrial economy. I bet those papers will be edifying, but, like "The Great Buddha+,” they’ll also be pretty dry. I know there isn’t supposed to be any narrative momentum, but there's also rarely any poetry in Huang's black-and-white photography. We see inspiration-less images that are supposed to be beautiful for beauty's sake, like images of rainwater collecting in a puddle or a field of tall grass rippling in the wind. And Huang’s characters are so thinly-drawn that his big ideas wear thin fast.

Everybody in this film is a shill, a prostitute, a pushover, or a simp. Nobody with power is introspective and nobody without power matters (a dichotomy that even Pickle inevitably realizes when his own uncle tries to sell him over-priced sunglasses while Pickle begs for help caring for "Mrs. Pickle," aka: Pickle's mom). It's a bad scene where you agree with everything being said but still can't wait to go home. But that's all "The Great Buddha+" has to offer: bad times, and in such meager portions, too. 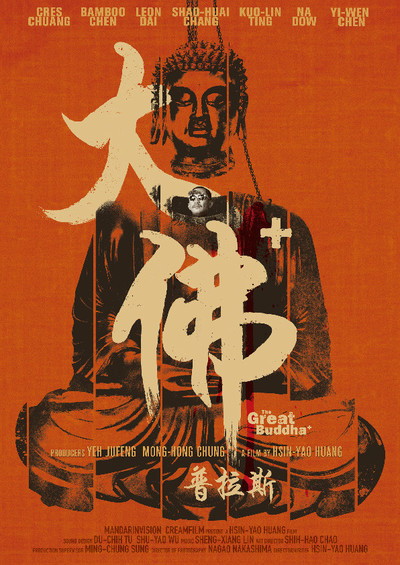