When I sit down to write a review, I generally try to not give away any plot details that might be deemed spoilers, and try to avoid revealing anything that hasn’t been featured in the trailers. That said, I still find myself at a loss reviewing “The Good Liar” because this isn’t the case of a film where there are only a couple of details to avoid, if at all possible. Here is a film where virtually every aspect of its existence, right down to its title and cast list, could very well be considered to be spoilers by some observers, no matter how cagily I try to handle them. So, if you are especially sensitive to such things, I would recommend that you simply put this review aside entirely and save yourself the aggravation. If you are one of those people, I suppose I could just tell you right now whether you should ultimately see it or not but, you know ... why spoil it for everyone else?

Set in London in 2009, the film opens as two people of a certain age find themselves chatting on a dating website and agree to meet for a casual dinner. This is where Roy (Ian McKellan) and Betty (Helen Mirren) come together and after an initial bit of awkwardness—each one utilized a fake name online—they quickly hit it off. Their relationship is not necessarily romantic, per se—Betty just lost her husband a year earlier and is not ready for something along those lines—but they become companions close enough so that when Roy’s bum knee acts up one night, Betty doesn’t think twice about letting him spend the night at her tastefully appointed home. The only fly in the ointment in this otherwise sweet-sounding story is Betty’s grandson Steven (Russell Torvy), who is instantly suspicious of Roy and worries that his vulnerable grandmother is rushing into things far too quickly.

By this point, we already know that Steven’s suspicions are pretty accurate for Roy is a con man who likes fleecing women like Betty out of their savings. He doesn't so it so much for the money as the sheer thrill of putting something over on the kind of person who might think themselves too smart to fall for a con job in this day and age, and who would certainly be too embarrassed to report it to the police and risk humiliation. With the aid of his partner (Jim Carter), Roy’s plan is to convince Betty that, as a way of planning for their financial futures, they should put their respective bankrolls (with hers clocking in at nearly three million pounds) into a joint account that each will have access to but which he will, of course, drain immediately before disappearing. Although Roy has done variations of this scam many times before, there are a couple of complications this time around. One involves the unexpected reappearance of one of the victims of his previous job. That person is dealt with easily enough (if a bit messily) but there is an added complication in that it seems as if Roy might actually be developing something resembling feelings for Betty, especially after learning of some health issues she has kept quiet.  Before long, the two decide to go on holiday and this is he point where I really must beg off from revealing anything else.

“The Good Liar” was directed by Bill Condon, who is best known for such tony adult-oriented projects as “Gods and Monsters,” “Kinsey” and “Mr. Holmes” as well as a side gig working on musical extravaganzas like “Dreamgirls,” “Beauty and the Beast” and “The Greatest Showman.” Before those films, however, he was responsible for a number of low-budget and occasionally lurid potboilers with titles like “Murder 101,” “Dead in the Water,” “Deadly Relations” and “The Man Who Wouldn’t Die”—most of which could have served as effective alternate titles for this one. In many ways, this film feels like a fusion of those two otherwise dissimilar filmmaking periods by taking a storyline (adapted by Jeffrey Hatcher from the book by Nicholas Searle) that is undeniably twisty and trashy in equal measure and using the formidable presence of the two leads to distract when the story threatens to go off the rails. This is especially important because it quickly becomes apparent that this is one of those stories where nothing is quite as it seems, and leading to a shocking revelation that most will see coming, at least in the broad strokes. A film of this sort needs an airtight plot—or at least airtight enough to keep you from questioning things as it is running—but there are a few too many instances in which characters say and do things solely because the plot requires them to do so.

For roughly the first half, the film is reasonably light. But over the course of the second, it starts introducing some fairly dark thematic material that jibes uneasily with the earlier tone, and then leads to some revelations in the final act that are so bleak and despairing that they wind up throwing the whole film off balance. Without going into detail, I don’t object to the content but the film does not earn the right to utilize such dramatically charged material in this kind of context. Having not read the book, I cannot say whether it handled these developments in a defter manner but Condon cannot quite figure out a way to use them in a suitable or satisfying way.

“The Good Liar” is ultimately a near-miss that offers up a few reasonable diversions along the way, the main one being the inspired pairing of the two leads. Their work here probably wouldn’t crack any lists of their Top 20 or so performances, but the sheer fun of watching them playing off of each other helps give their scenes a charge that they might have lacked in other hands. For his part, Condon keeps things humming and offers up a well-staged suspense sequence set in the Charing Cross underground station to boot. As a whole, “The Good Liar” is not quite good enough to deserve the comparisons to the works of Alfred Hitchcock it's clearly aiming for, though it is just good enough to suggest what Hitchcock himself might have done with it on a second pass. 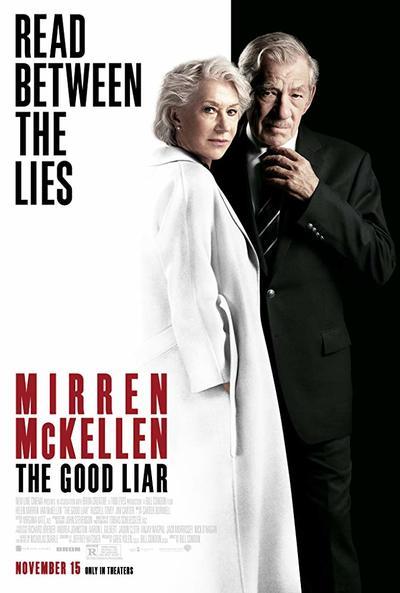 Rated R for some strong violence, and for language and brief nudity.