Just because something works in one medium doesn’t mean it automatically will in another. There’s an egotism in Hollywood that often leads people to assume that anything—a TV show, a play, certainly a Pulitzer Prize-winning book—can be made into a feature film. But the urgency of being in a theater with actors, the depth allowed by hundreds of pages in a book, the episodic structure of television—you simply can’t mimic it. And there may be no better example of that blind assumption than John Crowley’s “The Goldfinch,” which adapts Donna Tartt’s Pulitzer Prize winner with disastrous results, zapping it of all nuance, leaving only the plot, which wasn’t exactly the source material's strength. If Tartt’s book is about grief and the sudden trauma that can derail a life’s trajectory, Crowley’s film feels like it doesn’t understand either of those things at all, merely using them as exploitative decoration on a beautiful but shockingly hollow experience.

The title of the book and movie refers to a painting that was on exhibit at the Metropolitan Museum of Modern Art on the day that Theo Decker’s life changed forever. Theo (Oakes Fegley) was there with his mother when a terrorist attack happened, killing her and others, and leaving rubble. Theo awoke and took the painting, something that had survived for centuries, handed down over generations, but now looks like it could get lost in the grief spiral that Theo is about to enter over the next two decades of his life.

Before taking the painting, Theo is handed a ring by a dying man, and told to take it back to his partner Hobie (Jeffrey Wright). With his mother dead and his father MIA, young Theo becomes a part of two worlds—that of an upper-class family that takes him in, led by a matriarch played by Nicole Kidman, and the antiques shop run by Hobie. Of course, both are incredibly formative, and one of the strongest themes of this narrative is what Paul Auster calls “the music of chance”—the idea that random events, even tragedies, shape us into people we wouldn’t otherwise be.

If all of this sounds like deep, philosophical material, much of it is in Tartt’s book, but Peter Straughan’s incredibly frustrating screenplay diminishes almost all of the character detail from a book that’s dense with it. Over nearly 800 pages, told in first-person, Tartt has the freedom to get readers into the development of Theodore Decker in ways that they simply never figured out how to replicate on film. He’s a black hole at the center of this movie, someone who merely reacts to what is around him, and while Fegley is solid as the child version, poor Ansel Elgort completely loses his way as the older version. Although the poor dialogue and incredibly awkward handling of some of the action in the final act can’t really be blamed on hm. Overall, most of the performances are lacking—Kidman is wasted to an upsetting degree—with the possible exception of Wright, one of the few cast members who seems to be playing character more than plot.

There is a lot of money and talent behind “The Goldfinch” and so it looks “important.” After all, Roger Deakins shot it, and he’s not about to make an ugly movie. The costumes, the lavish interiors, even the score by Trevor Gureckis—it’s all designed to give the impression of a high-class, serious drama—sometimes called “prestige,” or, less kindly “awards bait.” And Crowley knows how to frame a shot—he certainly proved that in the excellent “Brooklyn.” But the desperate grandiosity of “The Goldfinch” eventually makes it sterile, draining the story of its humanity, and the audience's potential to have empathy for the characters' traumas. There's nothing below the surface of this soulless movie.

There’s a subplot in which Theo learns about cobbling together broken antiques to make them look new again. They aren’t original antiques, and Hobie warns him not to sell them as such. They’re fake, produced by machines from spare parts and lacking the human touch of the real thing. If a film ever had a better in-story symbol of its own failing, I can’t think of it.

This review was filed from the Toronto International Film Festival on September 9, 2019. 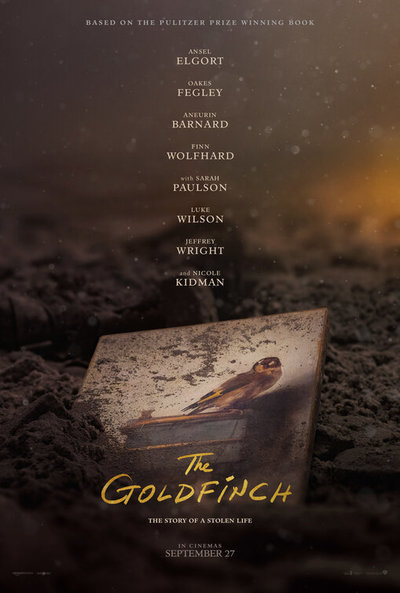