Gloria Steinem has lived such a long and significant life that it takes four actresses to play her—including two Oscar winners—in “The Glorias.” That device of having multiple performers portray the veteran journalist and activist, and sometimes even having them engage in conversations with each other, is the most effective element of director Julie Taymor’s effort to encompass a whole, complicated life while also avoiding traditional biopic tropes.

For the most part, she’s successful. Just when you think she’s heading into cliched territory, Taymor mixes it up, plays with structure, and subverts your expectations. Working from a script she co-wrote with Sarah Ruhl, based on Steinem’s autobiography My Life on the Road, Taymor hops around in time between Steinem’s youth in Toledo, Ohio and her worldwide travels in her 20s through the beginnings of her writing career and her key role in the women’s liberation movement of the 1960s and ‘70s. And while there’s a continuity to the performances—the hair, the voice, those signature, oversized aviator glasses—each actress imbues her role with a specific vibe and edge as Steinem evolves.

Julianne Moore gets the bulk of the screen time as Steinem from her Ms. Magazine years and beyond, and radiates both indignant idealism and world-weary wisdom. But Alicia Vikander meets and exceeds her own challenges as a younger Steinem, from her time at Smith College through her travels in India and her groundbreaking, undercover Playboy Bunny article, which put her on the map in 1963. Before that, we see little Gloria (Ryan Kiera Armstrong), an energetic girl who worshipped her struggling entrepreneur dad (a charismatic Timothy Hutton), and teenage Gloria (Lulu Wilson), who learned how to fight for others by caring for her physically and mentally ailing mother (Enid Graham).

But Steinem’s mother also had been a promising journalist—albeit under a male pseudonym, an unfortunate necessity back then—which lays the groundwork for her own path. What’s elegant and efficient in the storytelling of “The Glorias” is the way it reveals how each person and experience throughout her life shaped her ideology and sense of purpose. The Glorias’ conversations on a bus ride that serves as the film’s through-line illuminate this arc further. Sitting side by side, the wind in their center-parted hair, Vikander-as-Steinem laments to Moore-as-Steinem that she wishes she’d spoken up and fought back more when male colleagues and editors discouraged, objectified harassed her. The elder Steinem reassures her that she will eventually: “Plenty of times, lots of times, speaking your mind will get you into trouble,” she tells her younger self with an amused smile at the memory of her own feistiness. It’s a gimmick, sure, but also an insightful depiction of the kind of talk we all wish we could have with ourselves in our teens and 20s.

But at nearly 2 ½ hours, “The Glorias” does feel a touch too long toward the end. And the visual tricks Taymor employs to reflect Steinem’s inner state seem like filler, a distraction, even though they’re the kind of inventive flights of fancy the director has become known for through productions like her Broadway staging of “The Lion King” and films including “Across the Universe” and “The Tempest.” A contentious TV interview that turns into a whirling, swirling, “Wizard of Oz” homage is especially out of place. Steinem’s wit, grit and personality, her longtime work as a feminist icon and the relationships she builds with other civil rights leaders provide more than enough material for a fascinating film. It’s also enlightening, on the heels of the excellent Hulu series “Mrs. America,” to revisit this tumultuous era from Steinem’s perspective.

But the film quickly skims past one key chance to shed more light on her personal life. A topic that crops up throughout the movie is Steinem’s choice to remain single at a time when women were expected to get married and have children. Specifically, we see men ask her why she isn’t married in a series of interviews; naturally, she bristles. It’s a personal decision. When she finally does get married at 66, it feels like an afterthought: Who is this person who dazzled her so thoroughly that she changed her mind on such a crucial stance? She mentions that his name is David and we briefly see them wed in a traditional Cherokee ceremony, but that’s it. (Steinem was married to David Bale, entrepreneur and environmental activist and the father of Christian Bale, from 2000 until his death in 2003.) It’s a missed opportunity to help us understand her beyond her public persona.

Still, “The Glorias” is consistently a visual treat, as you’d expect from Taymor. The cinematography from the great Rodrigo Prieto (who also shot Taymor’s “Frida”) gives each of these eras a lush and distinctive texture, and the use of stark black and white provides a striking contrast as the various Glorias chat on the bus. And the clothes from legendary costume designer Sandy Powell are, as always, to die for; far more than an elaborate and groovy game of dress-up, Steinem’s clothes tell a story all their own in signaling her development, from the slim minidresses she wore as an ambitious young journalist to what became her go-to uniform of a black, long-sleeved top, black pants and boots. The costumes are also key to the portrayal of other larger-than-life feminist figures including Bette Midler as former Congresswoman Bella Abzug, Lorraine Toussaint as lawyer Flo Kennedy and Janelle Monáe as Ms. Magazine co-founder Dorothy Pitman Hughes. They’re all engaging scene stealers in showy, entertaining roles.

At the center is Steinem—still with us and still fighting at age 86. And sadly, what she has to say is just as relevant now as it was 50 years ago.

Now available on Amazon Prime and other digital platforms 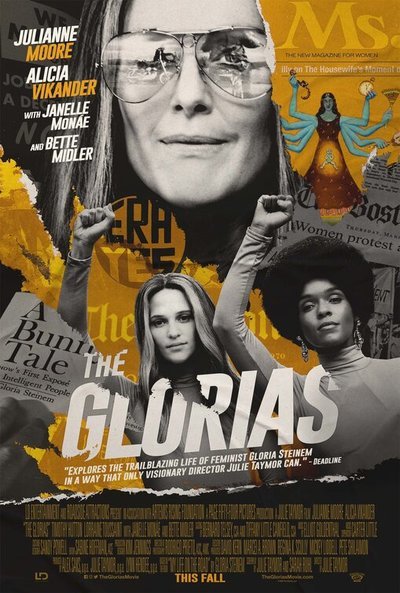 Rated R for some language and brief lewd images.