In "The Gift," written and directed by actor Joel Edgerton, Simon (Jason Bateman) and his wife (Rebecca Hall) have an awkward reunion dinner with a guy Simon knew from high school, a guy named Gordon (nicknamed "Gordo", played by Edgerton). After it's over, Simon turns to his wife and says, "Did he seem odd to you?" Well, yes. He did. And he gets odder. The odd-ness is hard to define. Is it the flat look in his eyes? Is it the mystery around why he keeps showing up, why he leaves wrapped gifts at the door, why he even wants to strike up a friendship at all, when Simon seems to barely remember the guy? What's Gordo up to? What does he want? One of the intense and disturbing pleasures of "The Gift," why the film creates such a sense of unease, is that the answers to those questions are just the tip of the iceberg.

Edgerton's script is extremely effective: he is interested in what happens between a supposedly happy couple when a third party introduces doubt, insecurity, second-thoughts, into the marriage. It's like an invisible poison released into the atmosphere, working on everyone in unpredictable and terrifying ways. "The Gift" is similar to "Cape Fear," or "Fatal Attraction," or, in another way, "The Night of the Hunter" in that it shows a family unit threatened by an outside force (usually an individual with an ax to grind). "The Gift" is a thriller, with plenty of scare-moments, but the fear unleashed is mainly psychological. The marriage itself is at stake. But why? What is being revealed? What secret is there in the past? Is there even a secret at all?

Simon and Robyn have relocated to California from Chicago because Simon got a swanky corporate job in a security systems company. Robyn is a freelance designer, but dissatisfied with her life in a vague and unspoken way. They're trying to start a family. Simon wants his wife to be happy with whatever she chooses to do. They buy a beautiful house with huge glass windows looking out into the surrounding greenery.

Gordo approaches the couple in the first scene as they shop for housewares, and re-introduces himself to Simon. There's something intense about Gordo's approach, but you can't really put your finger on it. Maybe he's just socially awkward. Robyn, whom her husband describes as a "door always half-open" kind of person, is delighted to meet someone from her husband's past. Pretty quickly though, Gordo becomes a problem. He shows up unannounced while Simon is at work and Robyn is home alone. He leaves gifts at the door, complete with notes ending in a smiley face. He is pushy in a quiet clueless way. Simon wants to get rid of Gordo, once and for all. Robyn gets the feeling that something went on between these two people in the past. She's not getting the whole story.

It is a testament to the film's visual style that a series of nicely-wrapped gifts left on the front stoop seems increasingly ominous. The house is lingered over by cinematographer Eduard Grau, the camera moving slowly down empty hallways (the shots repeat), the rooms at the end unseen, shadowy. Robyn showers, her vulnerable back seen through the glass. Simon and Robyn talk in the kitchen, the night-darkness outside the windows creating a feeling of exposure. These are common tricks in the thriller playbook, and they're "common" because they work. What these stylistic choices do is set up an expectation in the audience of what kind of thriller they are watching. There's even a beloved animal who mysteriously goes missing, calling to mind the boiling bunny in "Fatal Attraction." Did Gordo steal their dog? Why, why, would he do that?

Jason Bateman, known mainly for his comedic roles, gives a beautiful and focused performance as the ambitious Simon, worried about his wife, and furious at Gordo's omnipresence. Bateman manages to be both kindly and condescending, sometimes in the same moment. Simon has a temper, Simon struggles to be patient, Simon is funny and considerate. But the dynamic with Gordo opens up other aspects of his personality, things Robyn has never seen before. Rebecca Hall's performance is open and sympathetic, suggesting pain in her past, pain she has worked hard to overcome. Being nice to Gordo, and patient, is the right thing to do. Simon is right, though: Gordo does seem "odd," and Robyn comes off as naive and too trusting. You want to tell her to read Gavin de Becker's The Gift of Fear. And Edgerton, wearing three different hats in "The Gift," as director, writer, and actor, dials down any impulse to act overtly threatening or villainous. He's scary, but again, in a way you can't quite classify.

We've probably all known awkward people who can't "take a hint." There are people who can't sense when a conversation is over, who miss social cues, who are tone-deaf to the subtleties of human behavior. Gordo appears to be one of those people. Robyn feels sorry for him, thinks Simon should be nicer to him. And yet .. and yet ... Robyn starts to become terrified in her own home. She thinks she hears the front door opening, but then there's no one there. She can't sleep. An abyss opens up between Robyn and Simon. Distrust and suspicion have entered their marriage, the snake in the garden.

"The Gift" uses the tricks of the thriller trade well, but why it really works is that it withholds the necessary information until almost the very end. Robyn's journey of confusion and terror is our own. We want to know what is around that corner at the end of the hallway, what is out there in the dark, what is back there in the past. When she finally sees it, when she finally understands, the horror is worse than what we imagined. 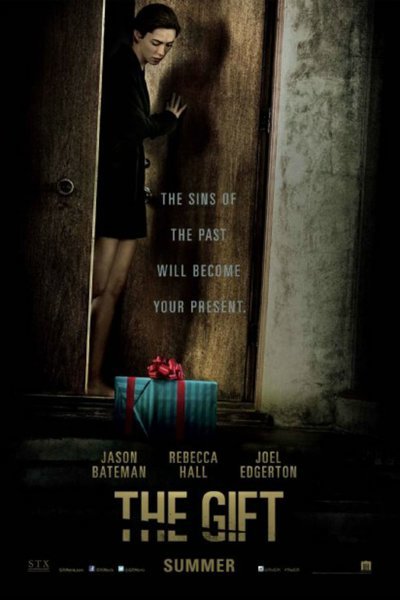