Guy Ritchie's "The Gentlemen" plays like a tall tale, a yarn heard at the corner pub, filled with exaggerations and embellishments, where the storyteller expects you to pay his bar tab at the end. And maybe you won't mind doing so. The narrator here is a conniving unscrupulous private detective (redundant adjectives, perhaps) named Fletcher (Hugh Grant), who glories in all he knows about the intersecting criminal-drug-lord elements operating in England, and sets out to blackmail ... everyone ... with a screenplay he's written, where he lays it all out, naming names. Fletcher's screenplay is called "BUSH," bush, in this case, a euphemism for "marijuana," this being an incredibly complicated tale about the "turf war" in the marijuana business: everyone knows legalization is coming, and fast. The end days are nigh. The "bush" double entendre is also present, just for the chuckles factor, and gives you an idea of the overall tone.

The players on board are an American named Mickey Pearson (Matthew McConaughey), who sees an opportunity in the languishing English aristocracy, sitting in their dilapidated manors dreaming of the good old "Downton Abbey" days. Mickey swoops in and cuts deals with "the toffs" in exchange for being allowed to grow marijuana on the property. Speaking of "Downton Abbey," Mickey is married to Roz (Michelle Dockery, aka "Lady Mary" in "Downton Abbey"), a "Cockney cleopatra" (in Fletcher's words), who runs an auto body shop with only women mechanics. (More could be made of Roz and her business. It's fascinating, the glimpse we get.) Mickey loves his wife, and is ready to retire from the weed business. Two rivals emerge as potential buyers: an American Jewish billionaire (Jeremy Strong) and a Chinese-Cockney gangster named Dry Eye (Henry Golding). The wild card is Colin Farrell's "Coach," an Irish guy who runs a boxing club, who keeps insisting he's not a gangster, although he behaves consistently in gangster-ish ways. Mickey's right-hand man is Ray (Charlie Hunnan), a mild-mannered man who looks like a desk clerk until you see him in action. Then he's terrifying. The "gentlemen" of the title is clearly meant sarcastically.

How all of this fits together is almost wholly in the hands of Hugh Grant, who gives an extraordinary performance, considering the circumstances. The script, which Ritchie co-wrote with Ivan Atkinson and Marn Davies, plays around with all the genre tropes, but the overriding structure is Fletcher "pitching" his script—of these so-called real life events—to an increasingly horrified Ray. Fletcher is a parasite, one of those tabloid "writers" who loves to be "in" on things, who sees people and their reputations as disposable, who adores explaining how much he knows, how much he has captured with his bazooka-sized telefoto lens. This "pitch" goes on for the entirety of the film, and so as scenes unfold, with Grant narrating them, it is as though the scenes emanate from Fletcher's imagination, when in reality we are seeing what really happened. Or are we? Fletcher is far from reliable. The entire script of "The Gentlemen" is really, then, a script within a script, and this is its ace in the hole. There's always one layer between us and the characters.

I could have lived without the running jokes about "funny-sounding names" (it's "Sixteen Candles"' "Long Duk Dong" all over again), and I could have lived without the scene where a rape is threatened. The Jewish billionaire speaks in a stereotypically “gay” way (no other way to say it, he might as well be lisping), and the anti-Semitic stereotype is all over the place. Maybe that’s the point, but it's a tired point. There's much that is legitimately funny in "The Gentlemen" and much that is legitimately disturbing. These things felt motiveless and cheap.

Although he has always been very very good, something exciting has been happening with Hugh Grant in the last couple of years. As he's moved into another age bracket, and out of affable self-deprecating Leading Man status, a formidable character actor has risen. As a character actor, his options broaden, and Grant has been taking full advantage. The one-two punch of "Paddington 2" and "A Very English Scandal"—coming out in the same year—is a perfect example. Grant was using all of these other acting muscles he normally hadn't been asked to use, and it has been thrilling to watch. And he's thrilling here, in a role which is mostly, let's face it, exposition. It's one long monologue. But you're riveted by him.

There's one moment where he puts his hand on Hunnam's knee, realizes it's an unwelcome touch, that he's been busted at inappropriate groping, and he then goes into this wild pop-eyed, "Oopsie #sorrynotsorry" facial expression. It had me on the floor. It's my favorite kind of humor, character-based, behavior-based. Because Grant is so singularly entertaining, and so broad (and yet connected) in his characterization and line readings ("There'll be blood and fucking feathers everywhere, darling," he croons with relish), he acts as his own gravitational force. Mickey Pearson may be the lead, but it's Fletcher who gets the last word. 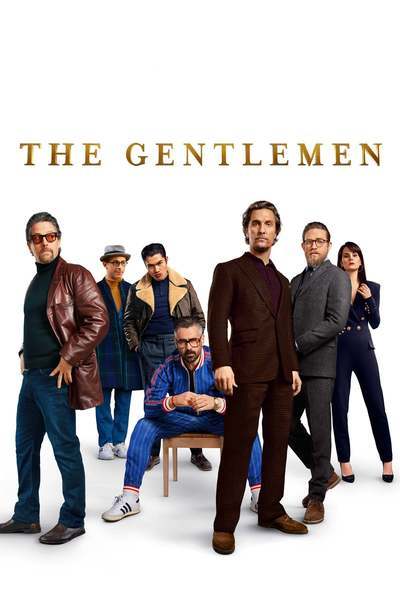