“Paddington” felt like an unexpected breath of fresh air when it came out in 2015. A delightful mixture of earnestness, slapstick and unabashedly punny word play, it managed to charm viewers of all ages while also offering an incisive statement about the importance of being kind to others who may seem foreign or different.

With his adorably furry frame and plucky spirit, the talking bear from Darkest Peru conveyed a pointed political message while remaining soft and accessible to the littlest audience members. Despite his old-fashioned roots, the story he had to tell felt utterly contemporary. No small feat, indeed.

Three years later, “Paddington 2” proves the smart-but-sweet combination that marked the first live-action film was no fluke. And the allegory about immigration it offers is, sadly, more necessary than ever in the post-Brexit, post-Trump world in which we live.

Returning director Paul King, working from a script he co-wrote with Simon Farnaby (and based on Michael Bond’s beloved book series), once again depicts a London that’s colorfully picturesque but also fraught with adventure and danger.  Paddington (voiced again in pleasingly soothing tones by Ben Whishaw) has now settled comfortably into his new life in Windsor Gardens with the Brown family: mother and father Mary and Henry (Sally Hawkins and Hugh Bonneville), daughter and son Judy and Jonathan (Madeleine Harris and Samuel Joslin), and their longtime housekeeper, Mrs. Bird (Julie Walters). He is a vital member of the community: helping forgetful neighbors, running errands for friends and generally making everyone’s day a little brighter.

But back in Peru, his dear Aunt Lucy (voiced once more by Imelda Staunton, part of the formidable cast of veteran British actors) is about to turn 100, and Paddington wants to buy her the perfect gift. When he discovers an intricate, vintage pop-up book of London in the antique store owned by old pal Mr. Gruber (Jim Broadbent), he knows he’s found the ideal item to express his love for the woman—er, mama bear— who raised him.

(The pop-up book sequence is THE highlight in a film filled with dazzling special effects. Paddington’s fur is vividly tactile, and his immersion in this live-action world is absolutely seamless. His antics may be wild but they’re always grounded from a visual perspective. But when the pages of the pop-up book come to life through a variety of animated styles—and Paddington finds himself wandering through them as he tells the story of Aunt Lucy’s love for London—it’s transporting both visually and emotionally.)

So Paddington takes a series of odd jobs to raise the money to buy the book—and King meticulously crafts the set-ups to the inevitable meltdowns that occur with each new gig. (You can see the wheels turning, but it’s still hilarious to watch them fall off every time.) But he isn’t the only one who has his eye on it.

A washed-up actor turned dog-food pitchman with the dashing name of Phoenix Buchanan also wants the book to explore its hidden secrets for his own nefarious purposes. Just as Nicole Kidman clearly relished camping it up as the evil taxidermist hunting Paddington in the first film, Hugh Grant wallows flamboyantly in this character’s delusional theatricality. The increasing villainy of the ‘90s rom-com darling, all the way through the “Bridget Jones” movies and culminating here, is truly a joy to behold. Outwardly charming but inwardly devious, Phoenix Buchanan is the role Grant was destined to play.

When he breaks into the shop one night and steals the book, Paddington gets framed for the crime and winds up in prison. Sounds dark—but here’s where the twee Wes Anderson influences that were so prevalent in the original “Paddington” manifest themselves once more. Not only does Paddington accidentally dye his fellow prisoners’ uniforms a cheerful shade of pink when he’s on laundry duty (a sight King frames with precise symmetry), he also charms the meanest guy in the joint—prison cook Knuckles McGinty (Brendan Gleeson)—by introducing him to his favorite food, the very civilized marmalade.

No matter what gets thrown in his direction—be it wrongful incarceration, dastardly adversaries or just plain mean words—Paddington finds a way through with his sense of self intact by holding tight to a deceptively simple philosophy. When you’re kind to others, he figures, everything will turn out alright in the end. It’s no spoiler to say that Paddington clears his good name with the help of his family and friends, but you may be surprised to discover how touching the resolution to all his troubles is.

“Paddington 2” may not be the novel revelation that its predecessor was, but it has its heart—and its stomach—in the right place. And that’s something we desperately need more of right now. 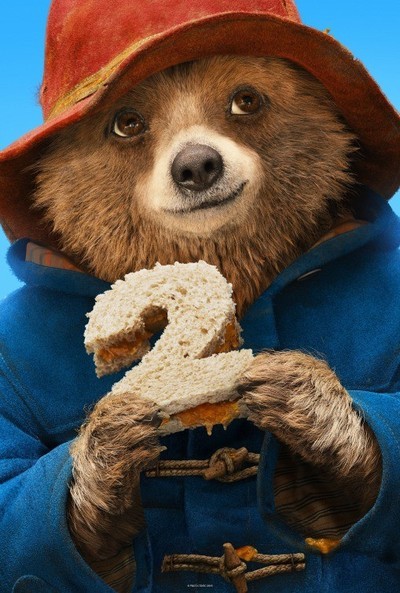 Rated PG for some action and mild rude humor.