If Darren Aronofsky's "The Fountain" is an ambitious folly, that's hardly inappropriate because the movie itself is about one of humankind's most grandiose follies, the quest for eternal life.

Aronofsky, director of the relentless "Pi" and "Requiem for a Dream," dares to hurl himself, and his movie, way "out there" -- in three narrative directions at once. But unlike some other films that have divided critics this year, "The Fountain" springs from a passion to take risks, rather than from hedged bets (M. Night Shyamalan's tepid, jokey, incoherent "Lady in the Water") or stillborn multi-story conceits (the calculating "Babel"), where the various narrative threads are only tenuously connected to a core theme.

OK, if this sounds more like a defense of "The Fountain" than a straightforward review, so be it. The movie has already been damned as silly and praised as audacious at film festivals from Venice to Toronto -- and both those assessments are valid, in part because of the movie's biggest aesthetic gamble: its earnestness.

Well, death is a serious matter. And "The Fountain" isn't so much about the quest for eternal life as it is about the will to stave off death. It's one thing to fantasize about living forever; it's quite another to fight the cessation of earthly existence in the next moment, or next week, or next year. "The Fountain" is a science-fiction historical adventure-fantasy about a man's (or Man's) struggle to face the incontrovertible fact of death.

It begins with Tomas (Hugh Jackman, a boy a long way from Oz) as a 16th century Spanish conquistador exploring the land of the Mayans in search of the biblical Tree of Life at the behest of Queen Isabella (Rachel Weisz). The movie slips into the 21st century, where Tommy (Jackman) is a surgeon and research scientist desperate to discover a cure for the tumor in the brain of his wife, Izzi (Weisz), who is writing a fairy-tale book called The Fountain that includes the 16th century story.

Surging forward another few millennia into the 26th century, the film finds Tom (Jackman) as a kind of zen astronaut hurtling through space in a big bubble with a dying tree and the ghost of 21st century Iz (Weisz) on their way into a mysterious nebula. The three stories flow into and out of one another.

Does that sound a little silly? Sure, and it's even sillier in synopsis.

The image of the tree -- the oldest living things on Earth, with their roots gripping the ancient soil and their branches reaching for the heavens -- is at the core of the movie, and the source of some of Aronofsky's most spine-tingling effects, from the tiny hairs on its trunk to its milky, essence-of-life sap.

Sap of a different kind inevitably seeps into the story, particularly the contemporary episodes, but Jackman and Weisz commit to their roles as deeply as Aronofsky does to his concept. Their gravity helps keep this Tilt-a-Whirl of a movie from completely flying apart.

Yes, "The Fountain" overreaches on every level, and that's exactly what I like about it. Big subject, big canvas, big ambitions. A young director's ungainly and overwrought folly? By all means, in the sense that Paul Thomas Anderson's "Magnolia" or Gus Van Sant's "My Own Private Idaho" or Martin Scorsese's "New York, New York" or Bernardo Bertolucci's "1900" are follies.

They're all bold attempts -- some more successful than others -- by passionate young filmmakers in their late 20s to mid-30s to sum up their own sensibilities and experience, to cram just about everything they know and feel, about life and about movies, on the screen at once.

That doesn't make for smooth, comfortable viewing, but I'd much rather watch somebody shoot for the moon when the stakes are sky-high than sit back while they play it safe. 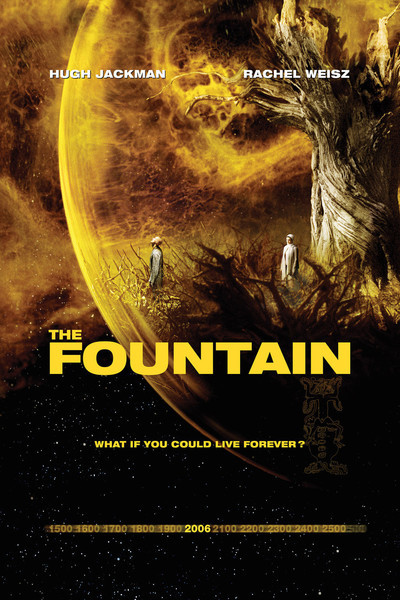 Rated PG-13 for some intense sequences of violent action, some sensuality and language