As Linus in the Peanuts comic strip said, "There's no heavier burden than a great potential." There may be equally heavy burdens, though, and in this semi-autobiographical film, writer/director/star Radha Blank faces a bunch of them, none heavier than having nearly everyone in her character's life tell her how to be more authentic.

That character is also named Radha. A decade earlier her great potential as a playwright was recognized with an award for being one of the "most promising 30 under 30." But now she is turning 40 and that promise seems to be receding into the distance. She has not had a play produced in years. She is teaching a bunch of high school students, helping them create their own play, but because they are teenagers they are disrespectful of her and of each other. Most of their ideas for the play have to do with sex. "I Googled you," one tells her disdainfully. "Last time you did anything was 2010." She acknowledges, though, that Radha may have some challenges in staging her plays. "White people scared of the truth."

The film is shot in gorgeous black and white by Eric Branco, with pops of color at significant moments, as when Radha describes her new play, called "Harlem Ave.," to a prospective producer. There are also impressionistic cut-ins, sometimes with a surreal flair. Characters—or perhaps Radha's own inner monologue—comment on the impending big birthday, one saying that women over 40 are like fruit that falls from the tree for the bugs to eat. Time's passing is also emphasized in increasingly impatient messages from Radha's brother. Their late mother, a visual artist, has been dead for a year and he needs Radha to help empty out her apartment. Her potential is weighing on her so heavily she cannot move forward.

Radha's best friend since high school is Archie (Peter Y. Kim), who is also her agent. He is sympathetic and supportive, and that includes pushing her to make a deal with a producer named Josh Whitman (as in White Man), played with ineffable self-importance by Broadway star Reed Birney. And if producing the play requires making some changes to "Harlem Ave.," well, that is why it is called show business and not show personal expression with no chance of breaking even.

Whitman is portrayed as high-maintenance and both a mansplainer and a whitesplainer, telling her that he almost does not believe a Black person wrote the play and inviting her to write the script for his Harriet Tubman musical. But writer-Radha recognizes, even when character-Radha does not, that theater is a collaborative art and an expensive one. When Whitman says that the play will have to have a white character (and, by implication, a positive or at least hopeful resolution of the racial issues) to attract an audience, he is not wrong.

So, Radha finds herself increasingly drawn to a less collaborative, less commercial art form, "something that doesn't rely on critics or gatekeepers." She wants to spit rhymes as a rapper. But the world of rap has its own boundaries, and they do not generally include commentary about "the white gaze's eroticism of Black pain." Radha claims her legitimacy by explaining that she grew up in the community but proves it with the rhythm and snap of her rhymes. She gets her beats from a quiet but soulfully observant DJ just named D (Oswin Benjamin) she found on Instagram. When she fails spectacularly at her first performance, witnessed by her students, unable to say anything but "Yo," D reminds her of what is possible by taking her to an all-female rap battle set in a boxing ring.

Writer/director Blank knows what her character is just beginning to learn. Her story is authentic because it is hers; she does not need to represent her entire race or age or gender. She has created thoughtful, appealing characters with a terrific cast that keeps the story involving, none better than Blank herself, who lets us see Radha's vulnerability as well as her resilience. 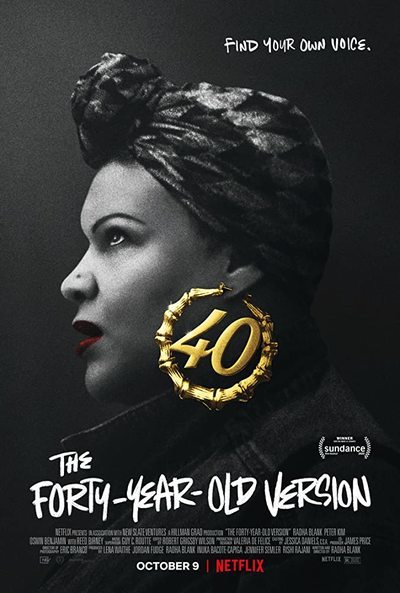 Rated R for pervasive language, sexual content, some drug use and brief nudity.