John Travolta has appeared in a number of legitimately great films that will live on in the annals of cinema history—"Saturday Night Fever," "Blow Out" and "Pulp Fiction" immediately leap to mind. He has also, to put it charitably, aligned himself with plenty of jaw-droppingly awful endeavors over the years—rather than dredge up painful memories, let me just say that the infamous "Battlefield Earth" is not even close to being the low point of his oeuvre. His latest vehicle, "The Forger," falls somewhere in the middle of those two extremes. It is nowhere close to being the worst thing that he has ever done, but it never for a single moment makes a plausible case for its own existence.

Travolta plays Raymond Cutter, a Boston-based thief and art forger who, with 10 months left to serve on his prison sentence, makes a deal with Kragen (Anson Mount), the very same thug who landed him in the stir in the first place to get him an early release. Of course, his former adversary is not doing this out of the goodness of his own heart—he wants Raymond to use his particular set of skills to pull the proverbial one last job. As such things go, this one is a doozy. In order to satisfy a debt of his own, Kragen is forcing Raymond to first paint a forgery of Monet's "The Promenade, Woman with a Parasol" and then break into a local museum to steal the real painting and replace it with the fake so that no one will ever suspect a thing. To complicate things even further, an undercover DEA agent (Abigal Spencer) picks up his trail.

Why would Raymond put himself through all of this? Well, it turns out that he wanted out of jail early in order to spend more time with Will (Tye Sheridan), his estranged 15-year-old son who is suffering from an inoperable brain tumor, and who has been living with his own irascible father (Christopher Plummer) during his stretch in the stir. Desperate to make some kind of connection with the kid, Raymond decides to serve as Will's personal Make-a-Wish foundation and offers to grant Will three wishes. The first two are easy enough in theory—he sets up a first-ever meeting between the kid and his mom (Jennifer Ehle), a messed-up junkie who bailed as soon as he was born, and then arranges to have Will relieved of his virginity. As for wish #3, I wouldn't dream of revealing it but I have a sneaking suspicion that if you have read this far, you can probably guess what it is.

In essence, "The Forger" is a collision between two time-honored screen genres—the heist thriller and the sentimental tragic tearjerker—but in this particular case, the ensuing cinematic Reese's Cup is well near indigestible since the two parts never really work, either separately or together. While watching it, I got the sense that screenwriter Richard D'Ovidio was so pleased with coming up with the gimmick of combining the two narrative elements that he just never got around to making them into a dramatically satisfying whole. The details of the heist are so preposterous that they make the "Ocean's Eleven" films seem taut and plausible by comparison, and they don't offer viewers anything that they haven't seen before beyond a couple of interesting details about the basic mechanics required to forge a great piece of art. Beyond that, the stuff involving the DEA agent is highly superfluous and the finale is a letdown even by dopey caper movie standards.

That part of the film, however, is vastly preferable to the stuff involving the sick kid and the resulting familial bonding. This stuff is pretty ghastly in the way it tries to hard-sell the sentimental aspects without actually earning any of the emotions that it is trying to provoke, and, to make matters worse, none of it pays off in a dramatically satisfactory or logically sound manner either. For his part, director Philip Martin is content to just let things plod along in the most pedestrian manner imaginable. (The great John Bailey serves here as cinematographer but there is nothing about the bland visuals to suggest that they come from the same man behind the visually striking "Cat People" and "Mishima," to name but a couple of his past credits.)

Although the three lead actors are all working under serious impediments—Travolta has been equipped with a singularly ridiculous soul patch and a Boston accent that runs the gamut from non-existent to "SNL" sketch broadness, oftentimes in the same scene, Plummer has a role that all but insists on being played in the hammiest manner imaginable and Sheridan (whose previous films have included such better projects as "The Tree of Life," "Mud" and "Joe") is playing a contrivance instead of a character—they are not without a certain innate charm, and indeed, the best scenes here are the ones in which they are simply allowed to interact and bounce off of each other in a relaxed manner before having to return to the mechanics of the increasingly forced plot. Aside from those moments, "The Forger" is the kind of instantly forgettable drag that will include a scene in which the characters are watching a movie on TV ("D.O.A." in this case) and when it is about to cut to something else, most audience members will think to themselves "I'll watch what they're watching." 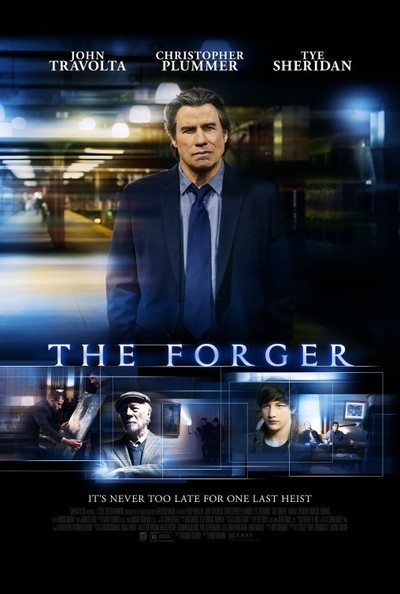 Tye Sheridan as Will Cutter