The First Monday in May

The debate about what does and does not constitute Art rages—although quite politely—at the Metropolitan Museum of Art in New York City. One would imagine that anything within the Met's revered galleries and extensive collections would receive the benefit of the doubt in regards to its stature as Art. Even so, there's still a battle over the status of fashion among the museum's curators and people involved in the fashion world.

The Met's Costume Institute is housed in the museum's lowest level, meaning that its collection is physically and, hence, figuratively seen as occupying the basement of Art. Some designers assume they're creating art, and others believe the notion of fashion designers being seen as or, worse, calling themselves artists is "boring" or egotistical.

After a slow-motion montage of celebrities in designer fashions on a red carpet, director Andrew Rossi's "The First Monday in May" addresses the debate about fashion's status as Art in the documentary's opening scenes. The movie's conclusion is: of course, fashion is Art, or at least that's what we're apparently expected to garner from the montage of intricately, ornately designed pieces from famous designers of the contemporary and modern eras.

Later, Rossi returns to the dispute in a bit more detail (mostly by juxtaposing interviews with fashion designers who are of opposing opinions on the subject), but by that point, it doesn't matter. The movie has answered the question for itself, and it has moved on to its real purpose: to offer an inside look at the creation of the Costume Institute's 2015 exhibit about fashions inspired by Chinese culture. Such exhibitions have become major public events, thanks to the star-attended gala on the day of the title that marks a Met fashion exhibit's opening. It's such an event that the date of the party joins Thanksgiving, Christmas, and New Year's Day as the only four days on which the Met closes its doors to the general public.

The party is orchestrated by Anna Wintour, the editor-in-chief of Vogue who also serves on the Met's board of trustees (Additionally, her name is attached to the museum's Costume Institute). The creation of the exhibit is overseen by Andrew Bolton, the curator of the Costume Institute. Both possess an air of authority and wield a presumption of certainty that serve them well in their respective positions.

Wintour's reputation, of course, precedes her, on account of the book and the resulting film adaptation of "The Devil Wear Prada," which did not—to put it diplomatically—portray her fictional counterpart in a particularly flattering light. Obviously, the documentary gives Wintour and others an opportunity to address that reputation. The counterargument is reasonable enough: She is particular in what she wants and direct in how she states it, and if she were a man, no one would likely see a problem with her manner.

Bolton is as particular and direct as Wintour, although he's quieter about it. When film director Wong Kar-Wai, who has been hired as the artistic director of the exhibit, points out that placing a gallery focused on the Mao era in a room featuring statues of the Buddha would be offensive, Bolton argues that the publicity from such controversy might be worth it. Bolton is a man who "trust[s] his instincts," even in the face of dissent from people, such as Wong and the administration of the Met's Asian art department, who might know better than him.

The relatively civil head-butting over such notions is key here. Rossi, given (and, perhaps but understandably, influenced by being afforded) access to these meetings of knowledgeable but conflicting minds, frames the debates, though, as stumbling blocks to the ultimate realization of Bolton and Wintour's visions.

The movie gives about equal time to the planning of the opening-night gala and the staging of the exhibit. Almost unavoidably, the celebrity-gossip nature of the party planning comes across more forcefully, with discussions about a headlining singer's fee, who should sit with whom at what table, and whether or not a certain actor's recent career merits him receiving an invitation. As for the exhibit, the movie shows agreements upon and dissent about general design choices, as well as trips to Paris to visit the Yves Saint Laurent archives and to Beijing for a publicity tour that's met with local skepticism about the exhibit. All the while, a ticking clock counts down the months, then hours, until the opening event.

The two components—the gala and the exhibition itself—are vaguely representative of the larger debate surrounding the commercial influences on and aspects of artistic enterprises. Like so much else of any significant substance in "The First Monday in May," Rossi glosses over it, finding a more comfortable narrative within the passion of his central subjects. As for the exhibit, the question of its ultimate success is not judged based on its cultural or curatorial merits but on whether or not it breaks ticket-sales records and those celebrity guests like it. 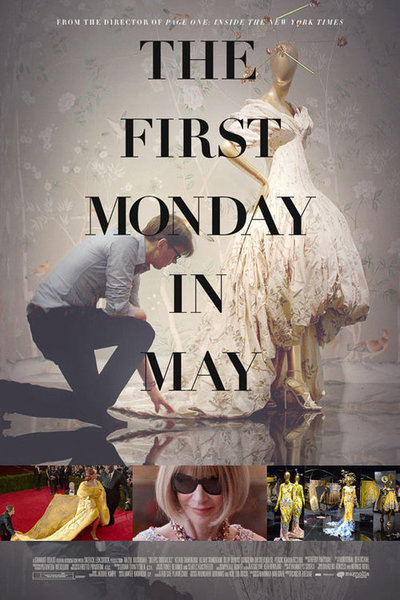