“The Finest Hours” tells the story of a true-life rescue operation, that, if someone had tried to pitch a similar but wholly fictional story following its basic parameters, would have been rejected as too implausible. For the most part, it is a solid film that bolsters its innately compelling narrative with effectively low-key performances, some genuinely thrilling sequences and only a few moments here and there that lean towards hokeyness. However, I cannot in good conscience fully recommend seeing it because of a presentation issue that renders the film virtually unwatchable for long stretches.

Set off the coast of New England, the film recounts the events of February 18, 1952 when a severe storm arose with such force that two oil tankers, the SS Fort Mercer and the SS Pendleton, were both literally split in half. While the Fort Mercer was able to get off distress signals and attract help, the splitting of the Pendleton resulted in the sinking of its fore section and the loss of its commanding officers and radios. With the rear section of the ship taking on water and some of the crewmen contemplating going out in the lifeboats—a suicidal move considering the size of the boats and the strength of the storm—it is bookish chief engineer Ray Sybert (Casey Affleck) who figures out a way to steer the crippled remains onto a nearby shoal in order to give potential rescue parties a little more time in which to find them before the rising waters finally overwhelm the generators and leave them dead in the water.

Though the Pendleton was unable to send out a distress signal, its existence was miraculously discovered and the commander of a Massachusetts Coast Guard outpost (Eric Bana) sends out a four-man crew consisting of sailor-with-a-troubled-past Bernie Webber (Chris Pine) and volunteers Richard Livesey (Ben Foster), Andy Fitzgerald (Kyle Gallner) and Ervin Maske (John Magaro) on a 36-foot motorized lifeboat in search of survivors. To local observers, this is a mission destined to at best fail as it is impossible for a boat that size in those waters to get across a sandbar and out into the open sea. Amazingly, after a long and harrowing struggle, Bernie manages to finally get the boat over the sandbar but loses the compass in the process. With night falling and with no way to determine where the ship is going, the mission goes from dangerous to downright suicidal, but Bernie and the others are determined to do their job, and get to the Pendleton to rescue as many of the sailors as they can.

“The Finest Hours” fumbles a bit early on as it goes about setting up its situation. There is an extended prologue charting the courtship of Bernie and telephone operator Miriam (Holliday Grainger) that is presumably meant to give an extra emotional resonance, but doesn't add much to the proceedings. It gets even more frustrating later on when the story keeps cutting back from the rescue effort to scenes of Miriam fretting back on dry land. Another problem is the way that the film throws lots of unexplained nautical terminology at viewers—although the story itself is basic enough to allow people to follow along easily enough, the barrage of jargon may throw some for a loop at first. The commanding officer character is also painted in confusing terms—it is never certain whether he is a martinet, an idiot or, as a newcomer to the area, too unfamiliar with the area to understand the dangers he is sending his men into.

Once it gets past these hurdles, “The Finest Hours” turns into an effective rescue drama that does not necessarily reinvent the genre but goes about its business in a smart and generally compelling manner. Director Craig Gillespie, who previously helmed the quirk-fest “Lars and the Real Girl” and the surprisingly good remake of “Fright Night,” does a good job of conveying the stories of the Pendleton crew’s struggle for survival and the trials of their would-be rescuers. The performances are also nicely down-to-earth as well—Chris Pine, who has often stuck me as insufferably smug, delivers his most likable work to date as Bernie, while Casey Affleck is equally good as the loner engineer who finds the lives of his fellow sailors suddenly in his hands. Technically, the film is, with the exception of a couple of somewhat dodgy bits, pretty convincing and the sequence in which Bernie struggles to get his tiny ship over the sandbar is a thrilling moment to behold.

And yet, as good as “The Finest Hours” is in its best moments, I am unable to fully recommend seeing it due to the idiotic decision to convert the film into 3-D, presumably as a way of pulling in a few extra bucks at the box office. Under normal circumstances, such a move could just be ignored as a minor nuisance but in this case, it actively goes about ruining the basic experience of watching it. In the case of “The Finest Hours,” a film that takes almost entirely at night and in the middle of a ferocious storm, the 3-D conversion is so murky that there are long stretches where it is almost impossible to discern what is going on up on the screen. If you have the opportunity to see it in 2-D, it is worth a look. But since Disney is clearly pushing the 3-D version, my advice is to skip it and wait for the Blu-ray—sadly, you will not get the full big-screen experience that a film like this cries out for, but at least you will be able to actually see the damn thing. 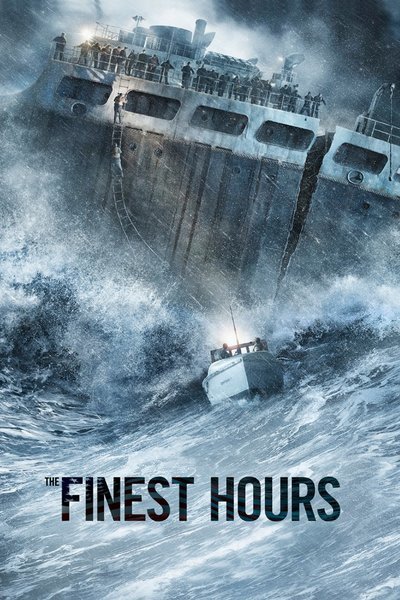