Xu Haofeng, writer of Wong Kar-Wai’s “The Grandmaster," returns to the martial art known as Wing Chun in “The Final Master." This time, instead of chronicling Ip Man, the Wing Chun master who trained Bruce Lee, Xu focuses on Chen Shi (Fan Liao), a 1930's-era master who wants to bring Wing Chun to Tianjin, a city in Northern China. Chen Shi wants to honor his master’s dying wish to open a school there, so that this particular martial arts discipline may live on for future generations.

Pitching a tent for Wing Chun won’t be easy for Chen Shi. As more than one person will state during “The Final Master," this is Tianjin, and there are rules and regulations to be followed. I’ll be honest with you: Said rules and regulations get so complicated that I lack the clarity to fully describe them to you. But, damn if I didn’t enjoy listening to every single word in Xu’s adaptation of his short story. There’s a pulpy, novelistic richness to the proceedings; the characters utter lines as purple as Prince’s aura while they cross and double-cross one another. Power struggles are imbued with a stubborn sense of tradition that almost justifies their occasional descent into absurdity. There’s politics and military actions and a powerful nemesis named Master Zou (Wenli Jiang), whose chill demeanor is the most entertaining thing in the picture.

Master Zou makes the rules in Tianjin, and in order to open a school, one has to defeat eight of Tianjin’s champions of rival schools. But that’s not all. One must also be a native of Tianjin to ultimately have the school be accepted as legitimate. Being an outsider from Canton, Chen Shi must stroll into Tianjin with the manufactured appearance of a married man out to train a local resident as the apprentice who will battle the rival schools. Zhao Guohui (Jia Song), the former working girl who marries Chen Shi, has her own agenda and a tragic backstory singed with scandal. The apprentice, Geng Liang Chen (Yang Song) also has his own agenda and tragic backstory.

In fact, everybody in “The Final Master” has an agenda and a tragic backstory. They’re always revealed in dialogue rather than flashbacks, and for the most part, they don’t matter as much in the final outcome. You may find this problematic, even annoying. But I’m the guy who lives for the sci-fi movie moments where scientists rattle off rivulets of extraneous, expository technobabble. So I felt right at home with all these character detail MacGuffins.

Anyway, Geng Liang Chen turns out to be better at Wing Chun than Chen Shi ever imagined. “He’s a prodigy,” says the shifu as his pupil goes through competitor after competitor. But Chen Shi has plans to get the glory of defeating the Tianjin masters himself, with some assistance (and explanation) from older rival Zheng Shanao (Jin Shijie). Zheng wants one last battle to keep his honor and status in Tianjin, or something like that. Chen Shi plays along, but his intentions are to use his allies as chess pieces en route to his own personal checkmate. When Zhao Guohui realizes Chen Shi plans on double-crossing his rival and his apprentice, she’s neither surprised nor pleased, but she sticks around to root for her husband.

The women in “The Final Master” are as thinly defined as the men, but they are given extra little perks of character that I found intriguing. Master Zou has a defiantly androgynous look that’s never once commented on, and she exerts her power with the calmest of demeanors, even when addressing the fearsome military men who represent Tianjin’s ultimate transition into a more militaristic entity. And Zhao casually mentions that she prays to Rudolph Valentino, whose picture was given to her by the foreigner whose sexual attentions unfairly made her a pariah to her family. Whether Rudy answers her prayers, I’ll leave you to discover. Zhao also figures in a scene involving a departing train that feels imported from an old Hollywood studio picture, with their romantic shorthand for trains included.

As for the fights: There are plenty of well-choreographed battles in “The Final Master." The award-winning choreography eschews wire work, keeping the action sequences squarely on the ground. Chen Shi, Geng Liang Chen and their numerous adversaries use a variety of cutlery, from cool, circular, defensive hand devices to comically gargantuan single blades that are almost bigger than the men swinging them. Since Chen Shi’s goal is, as one character puts it, “to maim, not to kill,” the battles aren’t too gory or brutal. Instead, one focuses on the skilled craftsmanship that both fighter and filmmaker employ. There’s a late reel battle in the narrowest of alleyways that’s as exciting as anything in recent memory.

This is a juicy, beach read of a movie, the kind of overstuffed story you’d devour in book form while slumming on the sand under an umbrella. 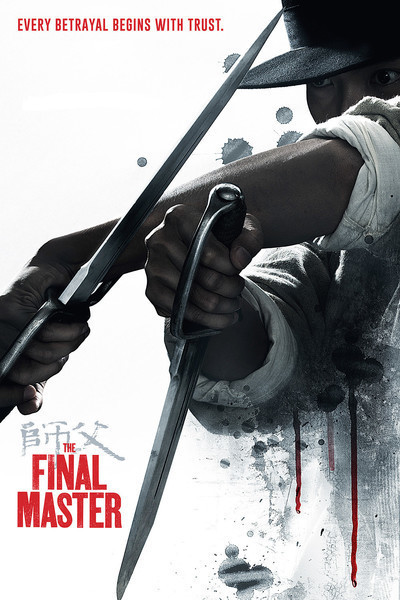