“The Farewell Party” is a bittersweet tragicomedy about a very thorny issue: assisted suicide and the right to die. It is, quite often, a very funny film, as mischievous as the youth that has long since left its characters, but not once does it treat its serious subject matter lightly. Its stance on the matter is evident early on, and it’s sure to ruffle more than a few feathers. Yet, rather than bludgeon its detractors or preach to its choir, “The Farewell Party” adapts a more effective, low-key approach, casually interacting with the moral and religious issues inherent in its premise. Whether you agree with the decisions made by its terminally ill senior citizens, “The Farewell Party” loses none of its power. If nothing else, it forces you to think about what you would do when placed in their situation.

The film opens with a call from “God” to Zelda (Ruth Geller). “God” is actually Yehezkel (Ze’ev Revach), her neighbor in the Jerusalem assisted living facility. Yehezkel does these masked voice calls to inspire Zelda to keep taking her medicine and to live with her aches and pains. “There are no vacancies up here right now,” Yehezkel says of Heaven, “so you must stay down there.” When the call is abruptly, comically disconnected, Zelda does the smart thing: She star-69’s the lost call. Yehezkel’s wife, Levana (Levana Finklestein) answers, telling Zelda “God” is indisposed in the bathroom and cannot come to the phone.

It’s low humor, I admit, but I laughed. There’s an infectious joy to how the actors handle the morbid humor here, and it is never mean-spirited. (Later, it’s revealed Zelda knew it was Yehezkel all along.) Writer-directors Tal Granit and Sharon Maymon successfully walk a fine line between light humor and heavier drama. Their characters are not without respect for the gravity of their situation, but they are also old enough to have developed a humor-laced and fearless acceptance of impending death. Levana, the voice of moral reason for the early passages of the film, and the spokesperson for maturity throughout, aptly describes her husband and their cohorts: "Their bodies are old but they're still children inside.”

One of those cohorts is Yana (Aliza Rosen), whose husband, Max (Samuel Wolf) sets the plot in motion. Max has been suffering in great pain with terminal cancer. Max wants to die but any form of assistance in this matter is illegal in Israel. Taking him to Switzerland, where this is legal, is discussed but Max is so weak he wouldn’t be able to make the trip. However, there are no autopsies performed on terminal patients, so if someone were to assist Max, it would probably go undetected.

Citing Dr. Kevorkian, inventor Yehezkel decides to build a machine that would allow the patient to self-administer a concoction that would painlessly kill him or her. Levana is violently opposed to this, on every ground imaginable. It’s morally suspect, religiously wrong and completely illegal, she notes. Her anger at Yehezkel is palpable, but he proceeds anyway, seeking out a doctor at the assisted living facility who “has experience with these things.”

That doctor, Dr. Daniel (Ilan Dar) turns out to be a veterinarian. At first, he thinks Max is a dog. Once that gets cleared up, he, like Max’s actual doctor, turns Yana and Yehezkel down. After much convincing, however, Dr. Daniel offers to help, roping in a cop named Rafael (Rafi Tabor) to help them conceal any evidence. Dr. Daniel also provides the medical knowledge and the concept of patient self-administering.

Against Levana’s wishes, Yehezkel builds the device. It is not a spoiler to state that the device gets used at least once in “The Farewell Party,” activated by the patient in question who wishes to use it. It is also no spoiler to mention that Yehezkel’s willingness to employ his machine will be reconsidered when someone much closer to him than Max falls ill and wishes to use the device.

Levana is in the early stages of dementia, and as “The Farewell Party” progresses, her symptoms get worse. Her episodes come without warning, from not remembering how many eggs she’s used in the cookie recipe she’s making with her granddaughter to an embarrassing nude appearance in public. While she and her daughter Noa (Hilla Surjon) look for nursing homes for Levana to reside in once she fully succumbs to the disease, Yehezkel lives in denial. His hypocritical response when Levana starts considering her own demise builds the film to its haunting climax.

This is clearly heavy, controversial material, but “The Farewell Party” somehow manages to stitch these moments of high drama with a steady stream of occasionally ribald humor. Not for nothing is this film’s poster a series of old naked people inviting you to their celebration. It’s not just an announcement of tone, it’s a warning that you might be offended.

By now you should know whether you want to see this. I rated it highly because I was moved and amused by it, and I enjoyed the characters and the actors who superbly play them. They are afforded an agency we don’t see given to older people in mainstream cinema. They’re allowed to make tough decisions, good and bad, without interference from a younger, supposedly smarter world. They’re depicted as people full of energy and contradictions, regardless of age. For example, Dr. Daniel is not only afforded an active sexual relationship with the married, closeted Raffi, but is also a septuagenarian still hiding his homosexuality from his mother.

In its native Israel, “The Farewell Party” was nominated for 14 Academy Awards, including nods for the superb Finklestein (who lost) and Revach (who won). The cinematography was also honored, though it may actually be too good for the setting; the assisted living facility at times looks like the Hospital Hallucination sequence in “All That Jazz.” As with that movie, “The Farewell Party” isn’t asking you to get behind its characters and their decisions so much as suggesting that you try and understand their motivations. I didn’t always agree, but I understood. 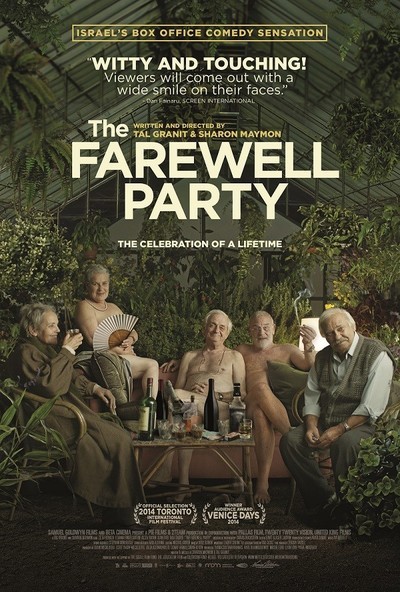