Life is tough in the Witness Protection Program. Life is pretty cushy, too, especially if you're the Manzoni family in Luc Besson's "The Family": you get to live in a quaint house in a tiny village in Normandy, you eat well, you have FBI guys stationed across the street 24/7, and you have a personal handler who makes sure that you and your loved ones are safe. The point of being in Normandy for the Manzonis is to somehow "pass" as regular Americans on holiday or sabbatical, and the Manzonis fail to manage this from the start, mainly because they are all raging maniacs.

"The Family" is a pretty uneven film, lurching from comedy to violence to sentiment, but it's best when it sticks in the realm of flat-out farce. The pleasure comes in watching the actors (Michelle Pfeiffer, in particular) submitting wholeheartedly to ridiculous situations. The film has a mix of influences and genres, obviously, and Besson plays with these and references them openly, but the farcical elements rest uneasily beside the violence, leaving the unmistakeable feeling that this is a film slightly at war with itself.

When dealing with the family's adjustment (or lack thereof) to small-town French life, it is on sure (and often hilarious) footing. Giovanni Manzoni (Robert De Niro) snitched on his Mafia friends back in the States, and because of that there is now a $20 million price on his head. In exchange for his testimony, he and his family (wife and two teenage kids, Belle and Warren) are placed in the Witness Protection Program, under the control of FBI agent Robert Stansfield (Tommy Lee Jones). Maggie Manzoni (Pfeiffer) is already sick of the life in hiding, and has a tiny habit of blowing stuff up when she gets upset. Of course placing a well-known Mob boss into a tiny village in France doesn't seem like the best strategy for the FBI, because the witness will stick out even more there, but you really can't ask those questions when you watch "The Family." The answers will not hold up under interrogation.

The film opens with the family (Robert De Niro, Michelle Pfeiffer, Dianna Agron, and John D’Leo) driving through the French countryside to yet another hideout since their cover was blown in the Riviera. The two kids loll bored in the back seat, Giovanni tries to tell everyone the new place will be fine, everything will be okay, the dog gets blamed for the bad smell in the car (when actually it is the stink of a dead corpse in the trunk, hidden there by Giovanni on his way out of Nice). This opening scene contains everything that is good and pleasurable about the film: watching Pfeiffer and De Niro act with one another, the weird juxtaposition of violence and everyday family matters, the family's anxiety at being in France when they'd rather be in Brooklyn. You are lulled into a false sense that you understand what is going on here—that the father, Giovanni Manzoni (Robert De Niro) is the "wise guy," and his family is just along for the ride. But the next couple of scenes explode that sense of safety (literally) as you realize that all of them, all four of them, are out of their minds.

Belle and Warren size up their new small-town school and promptly begin to wreak havoc among their peer group. In a matter of days, Warren has taken over 50% of the blackmarket cigarette business, as well as the prescription pill business, and when he is told by a teacher that his conduct has been poor, he says he wants a lawyer. On her first day, Belle accepts a ride home with four French guys who tell her they want to "practice their English," and when she realizes that maybe they want more from her, she beats one of the guys to a pulp with a tennis racket. Played by "Glee"'s Dianna Argon, Belle is a creepy character, gorgeous and innocent, but when she falls in love with her math tutor, you can't get the image of her smashing the tennis racket into another human being's face out of your mind. Meanwhile, Warren and Belle's parents are oblivious to what's happening in their children's lives. Giovanni thinks he might try his hand at a memoir, not a smart move for someone who is supposed to be in hiding. Maggie visits a local church, trying to re-connect to her faith.  Tommy Lee Jones shows up now and then to say it's hard to protect them if they insist on breaking the plumber's legs because he can't fix the pipes.

De Niro could play this role in his sleep, but he's fun to watch, especially in the scenes with Pfeiffer, and when his power is demeaned by his family's shenanigans. In one awesome sequence, the curator of a local film group calls up Giovanni and asks if he wouldn't come to their next meeting to have a nice debate on a great American film, Vincente Minnelli's "Some Came Running" (starring Frank Sinatra as an aspiring writer with a tormented past). Against the advice of Stansfield, Giovanni accepts. The head of the film society tells him they were sent "Goodfellas" by mistake, so maybe the visiting American would have something to say about that? Boy, does he ever. It's a giant wink to the audience, an inside joke, as we are treated to the bizarre vision of Robert De Niro as Giovanni Manzoni watching Robert De Niro as Jimmy in "Goodfellas."

Pfeiffer's performance is the reason to see the film, though. Calling back her show-stopping turn in "Married to the Mob," her Maggie is both supportive and bored out of her mind, yearning towards her old Catholic faith but unrepentant about blowing stuff up. She cooks at the stove, her hair in gigantic curlers. She kneels in church, praying to Jesus with earnest eyes. Pfeiffer has been very good in dramatic material, but she might be a comedienne at heart. There's one scene near the end of "The Family" where events are coming to a boil, buildings are exploding, and she crawls across the floor as quickly as she can clutching a gigantic kitchen knife. Her eyes are manic, wild, and yet also focused, like an assassin's.

Luc Besson has built a career on stylish and thrilling action films, and "The Family" is a mess compared to such earlier efforts as "Le Femme Nikita" and "Léon: The Professional." But for what it is, it works, while reminding us and again to not take it too seriously. 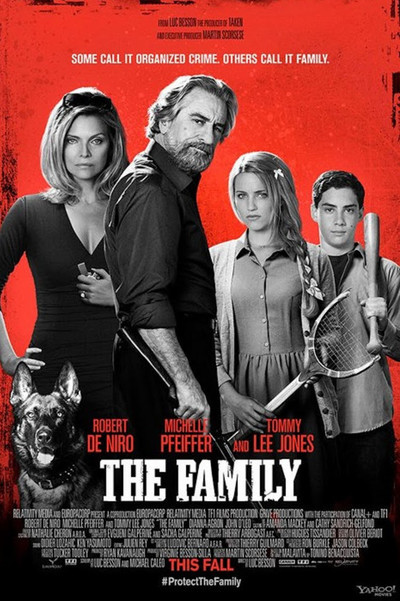