Joanna Hogg's films are personal, even uber-personal, so much so that she used her own furniture for Julie's apartment in "The Souvenir" and "The Souvenir Part II," transporting objects into the "set" to immerse herself and her cast in the past she was trying to capture. Objects are never just objects in Hogg's hands, but talismans, or, more aptly, souvenirs. They open little doorways into the subconscious. You could say the objects are Proustian, but Marcel Proust was just describing something we all experience. A phrase of music is heard, and you are transported back into middle school. You taste a cinnamon cookie and you are suddenly eight years old in your grandmother's kitchen again. It's powerful stuff. Hogg's work is rigorous in a very unassuming way, but every choice she makes is there for a purpose: to jog loose associations.

In "The Eternal Daughter," Hogg is working, again, in a very personal even auto-biographical mode, although the setting has changed, and the mood has changed. Julie, a middle-aged woman (Tilda Swinton) travels with her elderly mother (also Tilda Swinton) to a big country estate, a Downton Abbey or Gosford Park-type place, although considering the Gothic creepy setting, "Manderley" might be a more apt analogy. The trip is fraught for a couple reasons. Julie is a filmmaker (presumably the Julie of "The Souvenir") and is trying to write a film about Rosalind, her mother. Julie asks Rosalind questions and surreptitiously turns on her voice recorder. As a child, Rosalind was sent to this estate to escape the Blitz. Rosalind's memories from 60, 70 years before are superimposed over the current reality, Rosalind describing to Julie what used to be there. Time is not linear, it is porous. Julie finds a quiet corner to work in every day, but she is distracted, and unsettled.

The Hall itself (the film was shot at Soughton Hall in Wales) is the most unsettling thing. Julie and Rosalind appear to be the only guests. The structure moans and creaks. Windows bang in the wind. It sounds like a woman is crying somewhere, or children are running up and down the halls. Julie is jumpy. She can't sleep. She wanders the grounds like a wraith. The entire movie operates under the pathetic fallacy: Fog and mist billow across the screen. The wind heaves the tall trees around. There are times when Louie, Rosalind's dog, whines, or scratches at the door. Something is out there. Or in here. Either way, Julie is spooked.

Julie has moral qualms about recording her mother: there's something vampirish about it. She is also somewhat surprised and dismayed to hear Rosalind, always so chipper-cheery, share sad memories. Theirs is a very enmeshed relationship, a cathected one, even. Julie does not have children of her own. Maybe she never "broke away" into her own life, the way other adults do. She wants her mother to have a good time. But what's this? Rosalind sharing her regrets about being "not very nice" to her husband after a miscarriage? Julie is undone by the thought of her mother carrying around regret.

Not much "happens," and what does happen is repetitive: sleepless Julie wandering around, meals with mother, trying to get cell service out on the lawn, frequent prickly interactions with the receptionist (a very funny Carly-Sophia Davies, perfectly evocative of the sullen "I'll just do the bare minimum" employee). Joseph Mydell plays a groundskeeper, who suddenly appears one night. He is kind, and Julie finds comfort in his presence. Rosalind, too. But the whole mood is so charged it's impossible to avoid comparisons to "The Shining." Is any of this real?

Hogg reunited with cinematographer Ed Rutherford, who shot "Archipelago" and "Exhibition." Architecture and room layouts are always prominent in Hogg's films, and in "Exhibition" this is even more so. The space was cinematic, but Hogg's exploration of it was psychological. Rutherford works the same way in "The Eternal Daughter," which is all about those stairways, the hallways, the dark windows, the busy wallpaper, and the claustrophobia, so strange in a house so big. Hogg also reunited with Jovan Ajder who supervised the sound for "The Souvenir." The sound design for "The Eternal Daughter" is very big, with all those creaks and moans and howls. (Ajder also supervised the emotionally intricate sound design of Charlotte Wells' "Aftersun.")

Joanna Hogg's work operates via association. Hers is a Modernist sensibility. Even so, her work does not feel derivative, or like a copy of a copy. Her associations are not communicated through lazy shorthand. She drops associations into the text: music, books, and objects, all of which connect to the text. Maybe what I pick up on is not what is intended, but noticing these associations is part of the joy of Hogg's work. For example: in one scene, Julie and Rosalind lie in their single beds, reading, as the house moans and creaks around them. Julie is reading They, Rudyard Kipling's very touching semi-autobiographical story about a man who suddenly comes across a country estate. A woman and two children live there. The man finds them charming, but something isn't quite right. (Shades of "The Others.") Kipling's story operates like Fragonard's painting does in "The Souvenir." It roils around beneath the text, deepening your relationship to the story being told.

Another example of Hogg's associative approach is stylistic. The majority of "The Eternal Daughter" takes place at night. It's dark and yet the darkness glows, a sickly greenish dreamlike light. From inside the estate, the windows glow green. The effect is otherworldly. It took me a second to locate the association with this color: it's the color in Hitchcock's "Vertigo," another story of a cathected relationship, and surreal doubling, with Kim Novak playing a dual role (just as Swinton plays a dual role). The light reminds me (another association) of the great opening line from Sylvia Plath's gloomy Gothic poem The Moon and the Yew Tree: "This is the light of the mind, cold and planetary."

Sometimes Hogg's work is self-referential, and you see the same symbols showing up. She is drawn to mirrors, doorways, halls, and figures moving in and out of the frame. These are "tics" but they come from an authentic place. There's something, too, about how our influences aren't separate from us: they are embedded in our psyches, and sometimes it's hard to tell where the influence starts and ends. Hogg's love of "old" movies, classic Hollywood, musicals, noirs, and Technicolor extravaganzas, is not immediately apparent in her first films, where the camera remains mostly static, where the style is controlled and deliberate. But if you go back to her first film, the short "Caprice" (starring a young Tilda Swinton), where a woman gets caught up (literally) in the pages of a women's magazine, falling down a rabbit hole of advertisements and allurements, complete with a fully-produced music video, you can see Hogg working with her own influences, pouring them through her own sensibility. It's why her work is fun.

"The Eternal Daughter" is about an emotional state more than anything else. The illusion that Tilda Swinton is both Julie and Rosalind comes wholly from Swinton's sensitive specific dual performance. Hogg doesn't use trick photography to place them in the frame at the same time. Julie and Rosalind are filmed in conversation, back and forth from one to the other. When they do finally appear together, it's a sign that things are about to move into their final phase.

"The Eternal Daughter" feels like a first draft, or a sketch to be filled in later. This is perhaps reflected in onscreen Julie's struggles to even write an outline. Hogg's outlines, though, are more interesting than other people's finished products. There's always so much to think about. 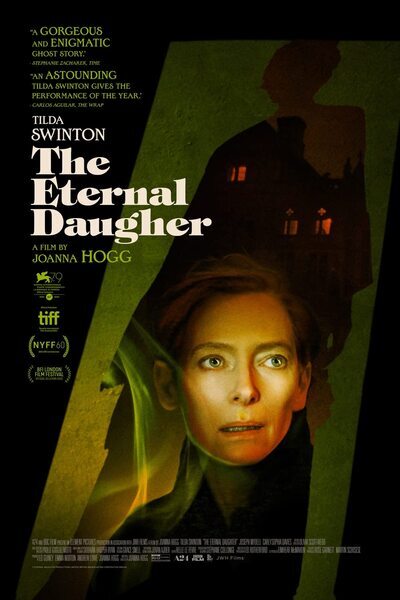 Rated PG-13 for some drug material