There's a scene in "The Souvenir Part II" when student filmmaker Julie (Honor Swinton-Byrne) tries to explain to her harassed crew what she wants in the scene they are currently filming. There's the irritated cinematographer. There are the two actors (Ariane Labed, Harris Dickinson), confused about how they are supposed to fulfill Julie's vision. To them, Julie seems way too close to the material, which is probably the case since her film is based on her first romantic relationship with a man who just overdosed (the events portrayed in "The Souvenir," released in 2019). At one point Julie says to her cameraman that she wants the frame to be "static," a two-shot of the actors on the couch, the camera remaining still. The look of disbelief on his face is almost angry: If that's all you want, then what do you need me for? The entire crew is on the verge of turning on Julie, of revolting against participating in the project (called "The Souvenir," in case you somehow missed the memo that "The Souvenir" [parts one and two] are semi-autobiographical explorations of similar events experienced by director Joanna Hogg).

One of the distinguishing characteristics of Hogg's fascinating—albeit small—body of work is her insistence on a static camera, with people walking in and out of the frame, sometimes having crucial conversations off-camera, the space onscreen empty of humans. In the five feature films she's made thus far—"Unrelated" (2007), "Archipelago" (2010), "Exhibition" (2013), "The Souvenir" and its sequel, Hogg's style is reminiscent of Yasujirō Ozu, whose static camera create an alive-ness within the frame that is still magical to witness. How does he do it? It seems so simple, but of course it isn't at all. Hogg acknowledges Ozu as a reference, but has also said this stasis comes from her love of old Hollywood musicals, where dancers like Gene Kelly were filmed in full-body shot, sometimes the camera moving laterally as the dancer moved, but mostly remaining still. Hogg has said she is interested "in gesture and how people move.”

It's a distancing technique in many ways, but it also draws you into a space where life seems to be just happening, where the camera just happens to be there to "catch" the events swirling around within the frame. Hogg messes with—and confronts—audience expectations. Who made up the rules? Who decreed the format should be long shot to medium shot to close-up?

"The Souvenir Part II" picks up immediately after "The Souvenir," when Anthony (Tom Burke), the charismatic older man whom Julie loves, is discovered dead in a drug dealer's apartment. In the opening scene of the sequel, Julie lies in her childhood bedroom, fussed over by her parents (Tilda Swinton, Honor Swinton-Byrne's real-life mother, and James Spencer Ashworth). She returns to film school, disenchanted with her original thesis project (a fictional story of a boy living in the once-bustling port city of Sunderland). She writes a new script about her relationship, a script her advisors—all male—urge her to abandon. This experience reflects Joanna Hogg's actual experience in film school, when her thesis project—a surrealist film called "Caprice" about a woman (played by a young Tilda Swinton) getting sucked into the pages of a women's magazine, bombarded with consumerist seductions and unrealistic beauty standards—was similarly rejected. The film school admins prized Ken-Loach-style-realism, and so what was this Busby Berkeley-MTV mashup? Hogg stuck to her guns. Julie sticks to hers as well.

"The Souvenir Part II" is more, though, than Julie's progression towards a completed film. It could be called, with apologies to James Joyce, A Portrait of the Artist as a Young Woman. Joyce's book showed a young man cutting ties with the outside forces on his life, first family, then religion, then country, in order to speak in his own voice as an artist. "The Souvenir Part II" also shows Julie's grieving process, because in life things don't happen in a neat way. Life doesn't move from A to B to C. A, B, and C happen simultaneously. Everyone around her, including the extremely memorable Patrick, another filmmaking student (the superb Richard Ayoade), knew the truth: Anthony wasn't a casual drug-user. He was a junkie. Julie was too naïve to recognize the signs. She struggles to come to grips with this.

"The Souvenir Part II" shows retrospective perception: not so much "hindsight's 20/20" but how events feel once they are long passed. The edits often thrust different scenes right up against one another (Helle le Fevre edited both "The Souvenir" and "The Souvenir Part II"), abandoning neat chronology. One cut that comes to mind: out of nowhere we see Julie watching news footage of crowds swarming over the Berlin Wall. She is sobbing, perhaps because Anthony, who worked for the foreign office, isn't there to witness the momentous event, but perhaps also with joy at the sight of all that unleashed freedom. The scene lingers for a moment, and then there's a quick cut to Julie directing a music video, one of her first jobs post-film school. The way she confidently expresses her vision to the crew and actors shows her new-found confidence after fighting those battles in film school. She's grown, and Hogg has shown us that process without underlining it.

That one cut is often what the past looks like in memory. When I think of the Challenger explosion, I remember watching it on television in the common room of my girls' dorm in college. But I also think of the "mean girls" atmosphere of that dorm. I remember all of us screaming and crying as we watched the space shuttle explode but I also think about how the other girls used to mock me for writing in my diary. The simultaneity of the two memories blend them together. This is what Joanna Hogg pulls off in both "The Souvenir" and "The Souvenir Part II."

Part of the way Julie processes her grief is by re-creating the relationship cinematically. She over-directs the actors, both of whom question why the female character didn't pick up on his drug use. You can see Julie struggle to provide answers, confronting how she had been living in denial. At one point she talks with her best pal Marland (Jaygann Ayeh, wonderful) about how she is not interested in making a crowd-pleasing movie about aliens. He keeps telling her there's no reason she should even feel that pressure. Just say what she wants to say in the way she wants to say it. How to translate that to a film crew is the challenge.

The two films are rich with the "souvenirs" of Hogg's particular motifs: flowers and trees, lowering thunderclouds, frames within frames (doorways create an inner frame to the frame made by the camera), hallways, interiors, mirrors. Hogg's interest in mirrors, evident in "The Souvenir," shows up here too, particularly in one gorgeous shot where Julie strolls across a film set in front of a series of huge mirrors, re-creating—seemingly by accident—the finale from "The Lady from Shanghai" as well as the famous mirror moment in "Citizen Kane," where Orson Welles (name-checked in the film) is replicated into infinity. It's the "almost-by-accident" quality (because of course it's not an accident at all) of Hogg's work that makes it unique. One of the themes of the film is that life is art and art is life. Life as we live it doesn't present us with themes, but in looking back across time themes emerge. Hogg is in process, still.

Along with all the poignant and perfectly-placed needle-drops (Hogg is a master at music selection), Dan Daniels' cover of Peggy Lee's classic "Is That All There Is?" (penned by legendary duo Jerry Leiber and Mike Stoller) shows up multiple times. The lyrics clue us in to the underlying messy and complex events on display, on what is really going on:

"We were so very much in love
Then one day he went away and I thought I'd die, but I didn't
And when I didn't I said to myself
Is that all there is to love?...

Julie is interviewed during the filming of the music video, and when answering a question about her goals, she says, laughing, that she will wait until she is in her thirties to answer that, because then she will know what she wants to say. Hogg made her first feature-length film at the age of 47, after years of directing episodic television, shorts, and music videos. She waited until she had something to say and a way to say it. In an interview with the Paris Review, author Katherine Dunn, who exploded the literary world with her 1989 novel Geek Love, was asked why there were 18 years between two books, why it took so long for Geek Love to gel. Dunn replied, "I don’t want to be glib here, but twenty years worth of life and work happened. Some might say I’m right on schedule by my lights."

So is Joanna Hogg. 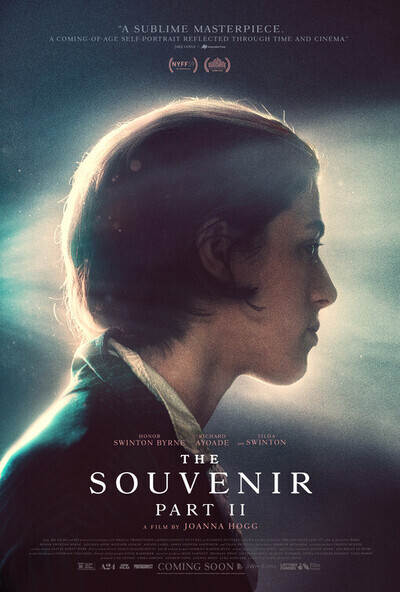 Rated R for some strong sexuality, and language.