“The Eagle Huntress,” a sky-high documentary salute to girl power, is at its best when it soars with a purity of purpose while propelled by a humbly determined 13-year-old Mongolian girl on the brink of breaking through an ancient gender divide. By her side are her two faithful companions, a majestic golden eagle chick that she is about transform into a mighty pursuer of prey and her supportive nomadic herder father—Nurgaiv, a two-time champion hunter himself—who proudly oversees his daughter’s own training so she can become the first female to compete in the Golden Eagle Festival.

Add a dizzying panoramic setting in a remote locale atop the Altai Mountains with wide-open vistas and frigid temperatures that can drop to 40 below zero and this true-life tale is prepped for emotional takeoff. Aisholpan, a straight-A student and tomboy who decorates her braids with flowers and bows when she isn’t whupping male classmates at checkers and wrestling, is as good as it gets as a courageous heroine to root for. With her rosy face, dimpled smile and calm grace under pressure, she is a standout both among her peers at her school, where she spends five days a week away from her family and on the big screen.

There is a subtle though palpable sense of Aisholpan being a chosen one, a natural-born talent. You can see why New York-based director Otto Bell was moved to shoot his first full-length doc after being riveted by the BBC News photos of this young lass casting the massive eagle perched on her arm into the heavens. The most compelling sequence that the filmmaker captures, one of many shot in precarious outdoor conditions, isn’t even the contest that Aisholpan eventually enters. Instead, it is when she and her dad climb upon craggy unstable terrain so she can stealthily snatch her young eagle from a nest on a cliff while a watchful mama bird hovers overhead.

Yes, predatory hunting, especially for sport, might not be for all sensibilities or ages despite the film earning a rare "G"-rating. The movie opens with an an older male hunter in the act of freeing his eagle after seven years of service and slitting the throat of a sheep as one last reward. Later, a pair of animals gets into a vicious claw-and-tooth struggle for survival but only the merest hint of carnage is shown.

Nature might be occasionally caught in the raw but the straight-forward narrative and simple subtitled dialogue could have been easily plucked from the pages of a children’s bedtime fable. Dad is a booster. Mom is OK with her oldest child not being interested in domestic tasks that are traditionally tended to by women. Even the Kazakh eagle-hunting elders, who we hear as they condescendingly describe girls as being “too fragile” and “not brave enough” to participate, are hardly villains despite their old-school notions.

Does it matter that the trajectory of “The Eagle Huntress” feels scripted at times and the actions we witness are sometimes staged or even manipulated? Somewhat. One result is that there is very little build-up of tension involving Aisholpan’s pursuit of her dream as she faces down 70 experienced fellow competitors. But Bell does compensate by presenting an even greater challenge as a finale, when Aisholpan and her eagle attempt to entrap a fox in the wild for the first time while she and her father ride their horses across hazardous iced-over bodies of water and waist-deep snow.

Bravo to veteran nature cinematographer Simon Niblett for devising ways to safely shoot such spectacular action—from a self-made drone and a crane to an “eagle cam" that employs a dog’s harness—in such risky environs. In fact, the atmospheric locale is as much an engaging character as Aisholpan herself.

A testament to the film's ability to enthrall comes in the form of several well-known outside participants who wanted to lend their support after viewing footage. They include Morgan Spurlock of “Super Size Me” fame, who provided financing and equipment while offering to recruit actress Daisy Ridley—lightsaber-wielding Rey in the current “Star Wars” trilogy—as a narrator. And hot pop songstress Sia wrote and performs the uplifting anthem “Angel by the Wings” with its “You can do anything” refrain over the closing credits.

Unlike such movies as “National Velvet” and “Yentl,” at least Aisholpan doesn’t have to assume a masculine guise to reach her goal. In that regard, she is more in league with “Whale Rider,” but with bountiful family encouragement. In fact, she doesn’t have to deny her identity at all. This is why my favorite moment is when she puts vivid lavender polish on her nails before embarking on the long all-day journey on horseback to the festival. Now that is my kind of war paint. 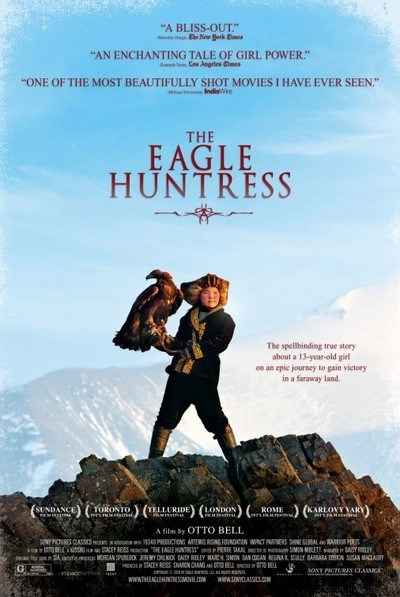