In the dark of night, a striking figure decked out like a film-noir femme fatale materializes along a road side, toting leather luggage and a Singer sewing machine. She is clearly dressed to impress with her crimson lipstick, white gloves, cocked-just-so chapeau, wavy blonde locks and a black-and-white ensemble that conforms to her womanly shape as if it were her birthday suit.

She takes a slow drag on her cigarette and issues this statement of intent that is more of a warning than greeting: “I’m back, you bastards!”

If that weren’t enough, a car stops and a uniformed constable gets out. He briefly stares before inquiring, “Is that, uh … Dior?”

It's quite an entrance in quite a movie. However, when it comes to “The Dressmaker,” nothing is ever enough. And that is its main problem.

Another woman who can rightfully proclaim, “I’m back,” is Australian director and screenwriter Jocelyn Moorhouse. She made a splash in the ‘90s with “Proof,” “How to Make an American Quilt” and “A Thousand Acres,” before taking time off to raise her family.

Now, 18 years later, she has adapted a book by Rosalie Ham with a script co-written by hubby P.J. Hogan of “Muriel’s Wedding” fame that is positively exploding with a surfeit of pent-up creative energy that unfortunately doesn’t know when to stop.

Not that “The Dressmaker” is ever dull and is even more than occasionally delightful in its nuttiness. This ultimately exhausting tilt-a-whirl of a revenge tale set in 1951 that takes place in the mythical dusty Down Under hamlet of Dungatar embraces all manner of influences—spaghetti Westerns, a Tim Burton-esque aesthetic, a warped world view that rivals John Waters, a small mob of morally corrupt Dickensian-style eccentrics and a story whose wild tonal shifts range from Tex Avery cartoony to Douglas Sirk melodramatic.

The lady above is one Myrtle “Tilly” Dunnage (Kate Winslet, providing a captivating harbor in this storm of kookiness), who has returned to the community that once banished her as a child. She is ostensibly there to care for her dotty crank of a mother, Mad Molly (a cantankerously cagey Judy Davis, nearly unrecognizable until her character regains her wits and pretty much steals the movie), who has been living in pungent squalor. But Tilly also is clearly out to right some wrongs while shedding a light on a tragic incident from the past that she can’t quite recall.

All that sounds quite logical, until Tilly, who learned how to make haute-couture designs while in Paris, hauls out her sewing machine and starts a business doing fashion makeovers for Dungatar’s frumpy female citizenry. This budding Edith Head also has an unusual way of attracting her first customers: She disrupts a rugby match by showing up in a curve-clinging scarlet gown before changing into an even more striking Rita Hayworth-inspired black dress—eventually causing the opposing team to lose by simply stripping off its matching jacket. It’s as if “Project Runway” took over the Super Bowl.

In the midst of all this, we are rushed through introductions to a raft of quirky characters. Some make an instant impression, such as Hugo Weaving's slyly campy rendition of a cross-dressing police sergeant who can’t help but hungrily caress Tilly’s luxurious fabrics with his eyes (shades of his drag queen in “The Adventures of Priscilla, Queen of the Desert”). Then there is Liam Hemsworth as hunky farmer Teddy, who quite fancies the reluctant Tilly. Until now, I have primarily thought of this actor as Chris Hemsworth’s younger, less talented but equally strapping brother. But working in his native Australia seems to have unleashed a very fetching devil-may-care nonchalance that casts quite a masculine spell. Also, please note that although they are meant to be contemporaries, Winslet’s a luscious 40 years old while Hemsworth is 26—and it doesn’t make a whit of difference. Gender parity at its finest.

Naturally, evil also lurks in Dungatar and it takes several forms, including a hunchback town pharmacist and wife abuser who greets Tilly by hissing, “Your mother’s a slut and you’re a bastard,” the rumor-mongering female schoolteacher whose lies caused Tilly to be forced out of town and the womanizing councilman who torments his clean-freak wife. By the time a rival seamstress strolls into town slinging her own Singer, Moorhouse is clearly guilty of over-accessorizing her already jam-packed fable.

Still, certain individual scenes are gems and stand out like statement pieces. Davis is at her riotous best when she accompanies Tilly and Teddy on a date to see “Sunset Boulevard” at a local cinema. Molly’s repulsed reaction to the gorgon-like visage of Gloria Swanson’s aging movie queen is beyond priceless—especially when the silent-screen diva puts the moves on William Holden’s gigolo of a screenwriter, which leads her to shriek, “She’s trying to kiss him. RUN!”

It is heartening to see Winslet, whose big-screen efforts after her Oscar win for “The Reader” have been uneven despite her supporting nod last year for “Steve Jobs,” get a chance to rip into a juicy lead role. And, for a while, “The Dressmaker” pays off with its out-of-nowhere developments, until it collapses into a pit of death, destruction and despair. I can’t say this is the best film you will see all year, but I can assure you won’t see another one like it again for a long time. 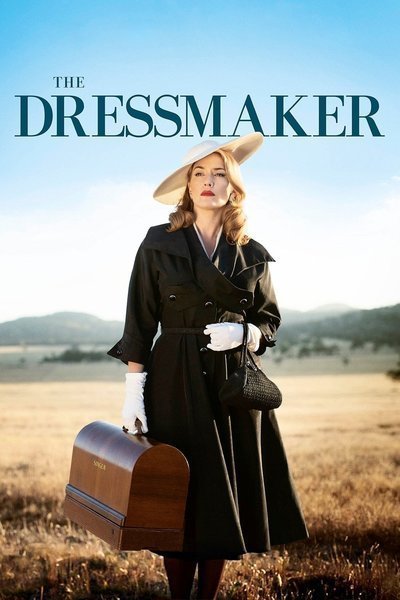 Rated R for brief language and a scene of violence.