It is perhaps no accident that the heroine of this story of women’s liberation in early 1970’s Switzerland is named Nora. The legendary proto-feminist heroine of Ibsen’s 19th-century drama walked out of her doll’s house about 100 years before the Nora of this movie walks out on her husband, two sons, and borderline abusive father in law.

The Nora of this film, written and directed by Petra Volpe, doesn’t seem likely to leave forever. Despite the elevation of consciousness that takes place throughout this movie, her bond to her husband Hans and her two kids is strong. The most pleasurable part of watching this Nora’s story is seeing how the males in her life have to make room for her, and do some learning themselves.

The movie opens with a montage of social unrest from late ‘60s America. Interesting to think that this country was importing socially conscious rebellion fifty years ago, huh? A female narrator’s voice (Nora’s, we’ll later figure out) tells of how thrilling it was to hear of such phenomena as Woodstock, and then observes that life in a rural Swiss village was a little dull by comparison. Livening things up was a referendum to allow women the right to vote.

Played with confidence and understatement by Marie Leuenberger, Nora at first seems a relatively obedient, complaisant if not complacent housewife. She and her matinee-idol handsome husband Hans are often apt to visit the farm on which Hans’s brother Werner, who’s married to Nora’s older sister Therese, is failing to thrive, much to the consternation of the aforementioned nasty father-in-law, who constantly lectures the family on its shortcomings, expresses his general disgust with the womenfolk therein, and keeps sex tabloids under his bed’s pillow. Nora reveals herself as an unusually tolerant and good-hearted family member by earning the trust of Therese’s rebellious teen daughter Hanna, who promptly betrays that trust by running off to Zurich with a ne’er-do-well boyfriend on a trip to town with Nora. It’s during that trip to town that Nora gets her first taste of feminism: some women handing out pamphlets on the vote referendum practically weigh Nora down with feminist literature, including a German translation of a vital Betty Friedan book. Hans is away for compulsory military training, so she reads her new stuff as well as a copy of Switzerland’s marriage act, just to make sure Hans is telling the truth when he insists that she can’t get a part-time job without his explicit permission.

An admission of disagreement with her town’s resident Phyllis Schlafly-like anti-feminist attracts the notice of an older woman, Vroni, who says that she was the only woman in town to support suffrage last time it was on the ballot in Switzerland, in 1959. The two women venture to a defunct pub that Vroni lost after her husband’s death, and discover an Italian immigrant, Graziella, preparing to transform the joint into a pizzeria.

The younger women get new hairstyles and go on a shopping spree. Soon more join them, and they’re running off to Zurich to march in demonstrations and sit in on a talk from a female sex guru who talks about honoring one’s own vagina and dropping the knowledge to Nora that she has a tiger between her legs. When Hans gets home, he meets a very different wife.

He is not entirely pleased. And neither are the rest of the town’s men, becoming even more agitated when a large group of women go on strike, holing up in Graziella’s place and refusing to do housework until the vote is taken.

This is a conventional but exceptionally warm crowd-pleaser of a movie, mostly thanks to Leuenberger’s performance. Her Nora is a shyer creature than many groundbreaking feminists of cinema, but Leuenberger makes this personality trait feel genuine, a real part of her character rather than a sop to make her rebellion more palatable to male viewers. Her desire to keep her family together persists even in her reasonable demands that she be accommodated as an actual, contributing, equal component of it. She’s definitely a performer to watch. 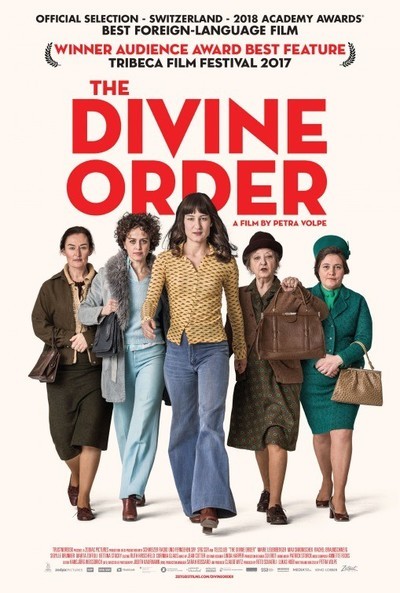