In “The Divergent Series: Allegiant,” the third outing in this unduly somber and rather violent post-apocalyptic series aimed at impressionable youths, Tris Prior—played once again by Shailene Woodley—and her backup quartet of buddies finally get to see what is over the massive wall that has surrounded the CGI skyscraper rubble of a decimated Chicago.

The revelation is almost as disappointing as when that fussy old Professor Marvel is shown manipulating the levers behind the curtain in “The Wizard of Oz.” Imagine if instead of being a forthright and upstanding stranded astronaut, Matt Damon from "The Martian" went full-tilt rowdy frat boy and basically trashed Mars, leaving behind a vaguely red-infused desert wasteland pitted with gaping crevices and soaked with radioactive nastiness.

Of course, the situation provides an outlet for Miles Teller’s duplicitous and increasingly irritating comic relief Peter to resort to his usual snarkiness when crimson raindrops start to fall: “What, now the sky is bleeding?”

But suddenly what appear to be hulking military vehicles fly into view to scoop up the gang and take them to what we learn is the Bureau of Genetic Welfare, a futuristic enclave built upon what remains of Chicago International O’Hare Airport. This causes Tris’ hangdog brother Caleb (Ansel Elgort) to inquire, “What is an airport?”

He isn’t the only one with questions. For instance: Just how does an isolated community with such depleted resources find a way to manufacture clothes, weapons, furniture, cutting-edge digital gadgets, airborne vehicles, food products and on and on?

By the time a second sequel arrives, there should rightfully be enough familiarity with the general premise of a franchise that the dialogue can move beyond constant exposition and allow for actual conversation. But given that the creative forces of this second-string “Hunger Games” wannabe have made the now-par-for-the-course, money-grab move of altering and stretching events in the final book into a two-part finale, “Allegiant” is basically a thumb-twiddling placeholder that relies on crashes, attacks and subpar effects rather than dramatic substance.

A series that began as a semi-interesting sci-fi fantasia, about a dystopian society broken into rival segments defined by a dominant personality trait, has morphed into a plot that involves a rather off-putting experiment in genetic purity that went awry. Memory-erasing gas, kidnapped children, surveillance technology and bodyguard drones are all involved in this militaristic effort to cleanse humans of unwanted attributes. There is much pseudo-scientific blather about a plan that sounds uncomfortably close to building a perfect race à la Hitler—but given the plot holes that might stay unfilled even when the last entry, “The Divergent Series: Ascendant,” arrives in 2017, it is best to not fret too much about making sense of what is on-screen.

Meanwhile, back behind the wall, even less fun is being had as a civil war is threatening to break out between "factionless" commander Evelyn (Naomi Watts)—who, in a case of “meet the new boss, same as the old boss” has grown desperately tyrannical after off killing Kate Winslet’s high-handed Jeanine in the previous film—and former Amity leader Johanna (Octavia Spencer), who now leads the catch-all group known as Allegiant. Think “Survivor” when the contestants drop their buffs and merge. At least these two Oscar-worthy actresses—double lead actress nominee Watts and supporting-actress winner Spencer—are allowed to collect easy De Niro-style paychecks while acting at half-speed.

They are easily upstaged by a new character in the form of Jeff Daniels’ David, who oversees the genetics bureau and takes a special avuncular-seeming interest in Tris. As for Woodley, her usual warm butterscotch-like essence has considerably cooled this time around, despite her new ultra-chic blonde bob and clingy white designer wear that appears to be from the Claire Underwood collection. She also isn’t quite as intuitive as before. Tris should know better than to trust such an eager-to-please type like David, especially since he controls an army of gun-toting minions wearing red-and-blue camo uniforms that practically scream "Fascist regime."

And if she isn’t hanging on David’s every word, she is busy swapping spit at inappropriate moments with her tall, dark and silent honey Four (Theo James, whose naked tattooed torso earns a gratuitous water-drenched money shot). But James’ upgrade to full action hero status means that Woodley, along with ally Christina (Zoe Kravitz), suffers an unfortunate kick-ass cutback.

As tedious as much of this sounds, an odd thing happened around “Allegiant’s” midway point. The fairly packed audience started vocally reacting “Rocky Horror”-style to some of the more overtly melodramatic turns with “oohs," “ahhs” and even laughter. Yes, there are unintentional amusements to be had. But, for me, nothing beats the high-tech showers used to detoxify Tris and her pals that coat their bodies with jelly-fish-like goo and literally suck out all the icky contaminants. You just know cleanse-queen Gwyneth Paltrow would kill to get her well-manicured hands on one of those. 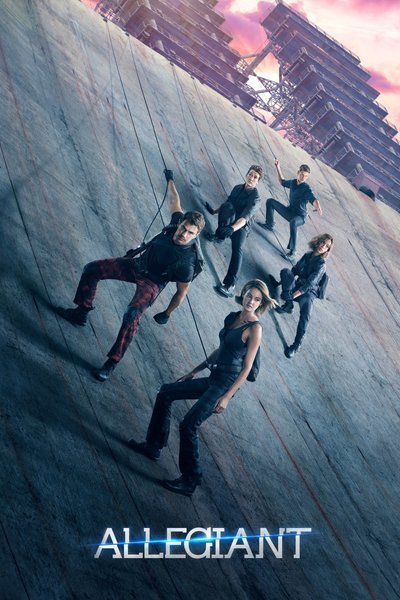 Rated PG-13 for intense violence and action, thematic elements, and some partial nudity.

Ansel Elgort as Caleb Prior