At a time when every action-oriented film that comes along tries to pummel audiences into submission with frantically-told narratives and elaborate action sequences that begin by skirting the edge of plausibility before diving headlong into complete lunacy, there is something innately appealing about a film like "Survivor," a smaller-scale international thriller that is not trying to blow viewers away with over-the-top pyrotechnics every five minutes. The problem is that while it never lapses into complete cartoonishness, it never does much of anything else either, and pretty much plays like a film made for basic cable that is buoyed for a while by a couple of relatively strong central performances before eventually succumbing to terminal mediocrity in its silly final scenes.

Kate Abbott (Milla Jovovich) is a highly-rated Foreign Service Officer who has just been appointed to the U.S. Embassy in London to help troubleshoot visa applicants for suspected terrorists trying to get into the U.S. When one guy comes in all but waving red flags, her immediate supervisor (Robert Forster) pooh-poohs her suspicions and when she tries to investigate further, she runs afoul of both an officious British inspector (James D'Arcy) and the U.S. Ambassador (Angela Bassett). Of course, she is on to something after all and a top-notch assassin known only as The Watchmaker (Pierce Brosnan) is brought in to take her out. Although he misses her, his efforts take out nearly all of Karen's colleagues and, through a ridiculous chain of circumstances, leave her looking responsible for their deaths. With the British cops, U.S. agents and the relentless Watchmaker on her trail, Karen tries, with the limited assistance of the only two colleagues she still trusts (Dylan McDermott and Frances de la Tour), to evade capture while trying to figure out the terrorists are trying to accomplish and stopping it in the presumed nick of time.

As you can probably surmise from just that brief plot recap, originality is not exactly one of the strong points of survivor—screenwriter Phillip Shelby has essentially given viewers a mash-up of any number of movies ranging from "Saboteur" to "The Fugitive" to "Salt," to name just a few potential inspirations, without throwing anything new into the mix. At first, there is the suggestion that the story might point up the irony of the security expert being stymied and her actions misinterpreted by the very same devices (such as the omnipresent CCTV systems) and organizations that were supposed to make everyone feel safer in the first place but that notion is quickly and decisively abandoned. (There is, however, a final title card praising U.S. security agencies for the number of potential terrorist attacks they have prevented—an odd thing to mention considering the bumbling and easily duped manner in which they are depicted in the story proper.) Beyond that, exposition is doled out in raw and barely digestible chunks, the few plot twists on hand are tipped way too early to have any real effect and the final scenes, in which the target and the true nature of the attack are revealed, are silly instead of gripping.

"Survivor" was directed by James McTeigue, a filmmaker who can make stylish and enormously effective works when he is given strong material (as he showed with "V for Vendetta") and giant loads of gibberish when he isn't (as he proved with the beyond-dire "The Raven"). Here, he lands somewhere in the middle because while this film lacks the wild spectacle that a flashier filmmaker with a bigger budget might have given it, the lack of such eye candy is a better fit with the lower-key material on display. And when he does turn things up a notch (as in a multi-level staircase shootout between Jovovich and Brosnan), the results are effective. However, he never quite manages to maintain the necessary levels of suspense, and, by the time the excitement should be peaking in the final act, the film feels like it is treading water. (Part of this is undoubtedly the result of the number of stock shots and second-unit footage deployed to try to convince viewers that they are in a particular place and time and not in Bulgaria.)

The best thing about "Survivor" are the performances from Jovovich and Brosnan in the lead roles. Although a top action star through her appearances in the "Resident Evil" films, Jovovich correctly plays her role here not as some omnipotent super-babe but as a realistic person caught in an insane situation and trying to use her brains to figure things out instead of simply kicking all available ass. (That said, she does get ample opportunities to show that she can defend herself--perhaps a little too well for the average government analyst.) As the man alternately targeting and targeted by her, Pierce Brosnan is cooly effective as a ruthlessly efficient killer and the sight of the former James Bond deploying his own license to kill, this time for money rather than for Queen and country, adds a certain frisson to the proceedings that simply would not have been there had the role been filled by an actor without that background. There are other good actors here but they have not been treated quite as well by the screenplay--Forster, D'Arcy and McDermott are more or less wasted and it is at times painful to watch the great Angela Bassett play a role that asks here to do the exact wrong thing in every single scene.

Neither particularly good nor particularly bad, "Survivor" is the kind of film that one can safely put on the television while other stuff is going on without worry that important plot points will be missed along the way. The ingredients are there for a reasonably gripping good time but the excitement is stymied by a screenplay that clearly needed another pass or two in the hopes of jazzing things up. The end result is a film as bland and uninspiring as its title. Unless you happen to be a Jovovich or Brosnan completist, there is no particularly compelling reason to seek this one out 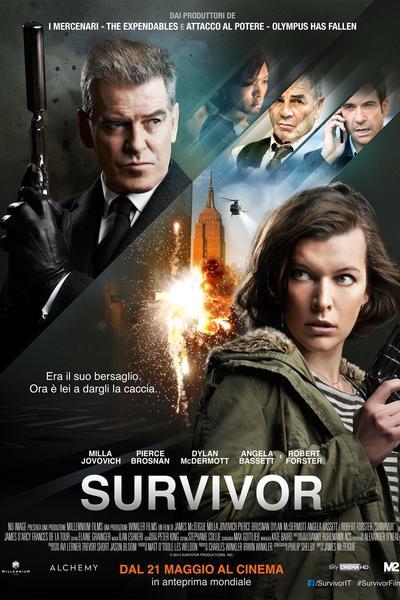 Rated PG-13 for violence, some action and brief strong language