In October 2018, Saudi Arabian journalist Jamal Khashoggi entered his country's embassy in Turkey to pick up some paperwork for his upcoming wedding, and never came out. It would eventually come to light that he was tortured, killed, and dismembered, reportedly by the order of Saudi Crown Prince Mohammed bin Salman. The big question is why—what could a journalist who had once been considered a regime insider have done to warrant such an ugly and brutal end, on the orders of that same regime? The new documentary “The Dissident” lays out the story in as clear and concise a manner as possible, and does so with enough details to make even those who have followed the case intently gasp in shock over what filmmaker Bryan Fogel has to show them.

One way in which the film goes about presenting a fuller understanding of Khashoggi’s death is by offering a fuller understanding of how he lived. For years, his work as a journalist and foreign correspondent essentially made him the face of Saudi journalism, making him an insider of the current regime in ways that allowed him to witness up close how the ambitious Mohammed bin Salman, also known as MBS, began consolidating his power. Although Khashoggi praised some of the reforms instituted by the comparatively progressive MBS, he was critical of other new measures that threatened the free speech of the population. Following the counter-revolution crackdown in the wake of the Arab Spring uprising, Khashoggi became increasingly critical of the government, especially in its dealings with President Donald Trump, and eventually was compelled to leave his wife and family for good and flee to America, where he worked as a correspondent for the Washington Post.

Khashoggi may have left his country but he did not stop fighting for it, as we eventually discover through Omar Abdulaziz, a Saudi dissident who also ran afoul of the government through his provocative tweets and had to himself leave home for Canada. There, Abdulaziz established a group of online warriors who would take on the Saudi-backed trolls hired to drown out any voices speaking out against the regime on Twitter. (This may sound trivial until you realize that approximately 80% of the country uses Twitter, and that Twitter is a form of communication not controlled by the government.) Khashoggi offered practical advice and financial aid that once again raised the ire of those in power back home. In one especially chilling moment, Abdulaziz recounts how a couple of high-profile Saudis tried to convince him to return home—even bringing one of his brothers along for the ride—with a plan whose details have a striking similarity to what we know about how Khashoggi’s killing was carried out.

Although the basic outline of Khashoggi's murder is well-known, Fogel recounts it in a manner that includes the humanity along with the lurid details. The results are simultaneously moving and horrifying. We get the expected elements—the now-familiar security camera footage of Khashoggi entering the embassy, footage of officials being allowed to investigate the apparent crime scene days later, and interviews with officials that suggest no doubt in their minds that A.) Khashoggi was murdered and B.) MBS almost certainly had some involvement in it. The most damning piece of the puzzle comes in the form of an audio transcript that recounts, in a manner as stark and horrifying as can be, all of the events from Khashoggi begging for his life, to the killers joking about how to cut up his body afterwards.

With its slick visual style and relentless pacing, there are times when “The Dissident” feels less like a documentary and more like a full-on spy thriller. (The only misstep in this regard is a pounding score by Adam Peters that might have seemed overblown if it had been applied to a Christopher Nolan epic.) This approach may disturb some purists but make no mistake—this is a strong example of documentary filmmaking that works both as an unabashed piece of activism, and as a strong and compelling work of journalism that bolsters its underlying message about the continued importance of a free press. “The Dissident” paints an indelible portrait of Jamal Khashoggi and everything that he stood for and eventually died for in the end. More importantly, by bravely reporting on a controversial story without any hesitation about potential reprisals, it continues Khashoggi's legacy in a manner that would make him proud.

Available in select theaters on December 25; available on demand on January 8. 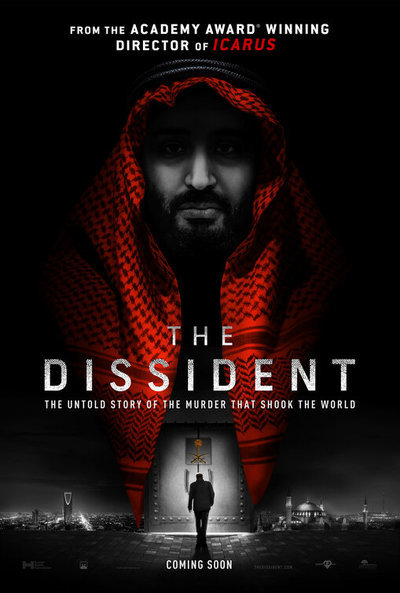 Jamal Khashoggi as Self (Footage)

Omar Abdulaziz as Self

Agnès Callamard as Self

Hatice Cengiz as Self

Mohammad bin Salman as Self (Footage)

Donald Trump as Self (Footage)