The Discreet Charm of the Bourgeoisie

“The best explanation of this film is that, from the standpoint of pure reason, there is no explanation.”

-- Buñuel’s preface to “The Exterminating Angel”

There is never quite an explanation in the universe of Luis Buñuel. His characters slip in and out of each other’s fantasies, driven by compulsions that are perhaps not even their own. Buñuel doesn’t like characters who have free will; if they inhabit his films, they will do what he tACells them. And his fancies are as unpredictable as they are likely to be embarrassing.

His theme is almost always entrapment. His characters cannot get loose. He places them in either literal or psychological bondage, and forces them to watch with horror as he demonstrates the underlying evil of the universe. Buñuel is the most pessimistic of filmmakers, the most negative, certainly the most cynical. He is also the most obsessive, returning again and again to the same situations and predicaments; it’s as if filmmaking, for him, is a grand tour of his favorite fetishes.

“The Discreet Charm of the Bourgeoisie” (which won the Oscar as 1972’s best foreign film) has nothing new in it; but Buñuel admirers don’t want anything new. They want the same old stuff in a different way, and Buñuel doesn’t -- perhaps cannot -- disappoint them. The most interesting thing about “Discreet Charm” is the way he neatly reverses the situation in his “The Exterminating Angel” (1962).

In that film, one of my favorites, a group of dinner guests finds itself in an embarrassing predicament: After dinner, no one can leave the drawing room. There is nothing to prevent them; the door stands wide open. But, somehow, they simply… can’t leave. They camp out on the floor for several days of gradually increasing barbarism, black magic, death, suicide, and visits from a bear and two sheep (which they capture and barbecue).

The film, as Buñuel noted in his opening title, makes no sense. Not that it needs to; it gives us an eerie feeling, and we look at his trapped characters with a mixture of pity and the notion that they got what was coming to them. In “The Discreet Charm of the Bourgeoisie,” Buñuel reverses the mirror; this time, his characters are forever sitting down to dinner -- but they never eat.

The consummation of their feast is prevented by a series of disasters -- some real, some dreams, some obviously contrived to feed some secret itch of Buñuel’s. At first there is a simple misunderstanding; the guests have arrived on the wrong night. Later, at an inn, their appetites are spoiled when it develops that the owner has died and is laid out in the next room. Still later, there are interruptions from the army, the police... and the guests’ own dreams. All of the fantasies of public embarrassment are here, including a scene in which the guests sit down to eat and suddenly find themselves on a stage in front of an audience.

The movie isn’t about anything in particular, I suppose, although devoted symbol-mongers will be able to make something of the ambassador who is a cocaine smuggler and the bishop who gets off by hiring himself out as a gardener. Buñuel seems to have finally done away with plot and dedicated himself to filmmaking on the level of pure personal fantasy.

Since the form of a movie is so much more important than the content anyway, this decision gives Buñuel’s immediately preceding films (“Tristana,” “Belle de Jour”) a feeling almost of relief. We are all so accustomed to following the narrative threads in a movie that we want to make a movie make “sense,” even if it doesn’t. But the greatest directors can carry us along breathlessly on the wings of their own imaginations, so that we don’t ask questions; we simply have an experience. Ingmar Bergman’s “Cries and Whispers” did that; now here comes old Buñuel to show that he can, too. 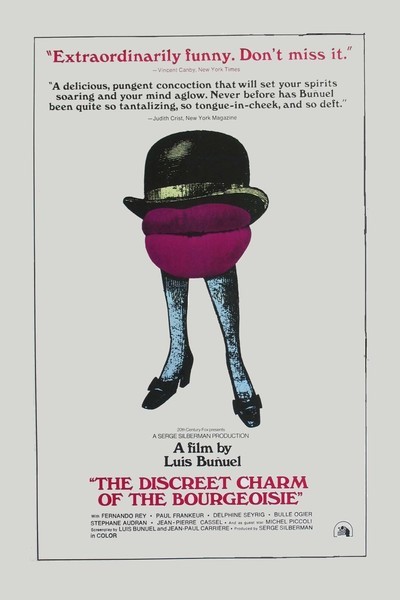 The Discreet Charm of the Bourgeoisie (1972)