When I told a friend of mine that I was reviewing Mötley Crüe’s “The Dirt,” he replied, “I don’t need a movie. I have Dr. Feelgood.” The sad thing is how true that statement is when one discovers the complete lack of depth, insight, or even competent filmmaking in this by-the-numbers Netflix original. You could listen to Dr. Feelgood two full times during the run time of “The Dirt” and learn just about as much about the band as you do in this R-rated Wikipedia article of a movie. And you’d have way more fun.

Mötley Crüe was one of the biggest bands of the ‘80s for reasons that “The Dirt” never even attempts to explore. There’s no interest at all in why Crüe’s brand of hedonism rock spoke to people in the era of excess because director Jeff Tremaine (“Jackass 3D”) is too interested in the most memorable stories from the 2001 book on which this film is loosely based. That book was loosely based itself on the band’s own history (some of the stories in it have been walked back since its publication) and Tremaine and writers Rich Wilkes and Amanda Adelson basically just skim through the craziest moments as quickly as possible. It’s like being at a party with a drunk fan who read the book a decade ago and wants to share the stories his whiskey-addled brain can recall. Did you hear about the time Ozzy Osbourne snorted ants?!?! Remember when Tommy Lee ran around a fancy hotel in his underwear?!?! The opening scene I can’t even really write about in a way that seems appropriate?!?! Crazy, right!?!?! Get me another beer and I'll tell you more!

Douglas Booth plays Nikki Sixx, who we see team up with Mick Mars (Iwan Rheon) and Tommy Lee (Machine Gun Kelly) first, and then the trio finds their frontman, Vince Neil (Daniel Webber). And it's off to the glam rock races from the band's inception to their 2015 "final" show (barely taking any time for when the band had a different lead singer). “The Dirt” isn’t even remotely concerned with how the Crüe made such popular rock or showcasing their underrated talents as musicians, too content to string together outrageous stories with some of the required, increasingly dramatic beats.

As you’d expect, a first half populated by sex and drugs becomes a back half populated by tragedy … and sex and drugs. “The Dirt” is bland when it’s just the party stuff but becomes somehow even more intolerable when it chooses to speed through the serious stories from the book like the car accident that killed Hanoi Rocks drummer Razzle, the time Nikki basically died from a drug overdose, and the tragic death of Vince’s child. Most of these “time to get serious” beats, with the exception of the Skylar Neil arc, which just feels like something Tremaine couldn’t handle dramatically, are sped over in about one scene, driving home just how superficial the whole affair has been. And there isn't even an ounce of interrogation of the crew's most questionable behavior. Tommy Lee cheats on Heather Locklear, Vince basically walks away from the band, Nikki does enough drugs to nearly kill him - but they're the Crue, man! Just turn up "Shout at the Devil"! And I said get me another beer!

Even the book tried harder to capture the guys' imperfections in a way that felt more honest. Now some might argue that a movie about a band as extreme as Mötley Crüe should be a rocking good time and superficial instead of deep. That’s nonsense. We have the music videos and the albums to get the image. Why do we need that again in a movie? Great biopics offer more than the stories we know and impersonations of the people who once dominated the charts. Worst of all, despite its attempts to shock, “The Dirt” is something that Mötley Crüe never was – boring. It offers nothing that the fans of the band won’t already know, won’t win over a single new one, and has absolutely nothing to recommend it in terms of filmmaking. Let’s all hope the inevitable Poison movie is better. 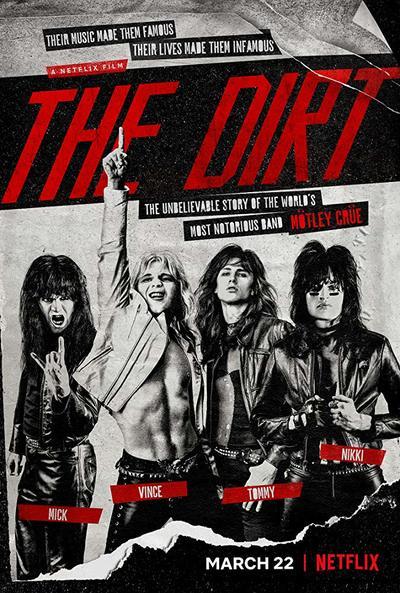