"The Devil's Candy," the latest horror film by Australian writer/director Sean Byrne ("The Loved Ones"), is like the male-oriented flip-side to "Rosemary's Baby." It's about one man's descent into a uniquely macho hell that is implicitly gendered as male by lead actor Ethan Embry's highly physical (and frequently topless) performance, his character's preoccupation with heavy metal music and the Satanic visions of dead children he imagines.

This film is very much a father's vision of apocalypse. Jesse Hellman (Embry), a painter who now must sell out a little more regularly in order to pay off a new mortgage, is plagued by demonic visions. He is literally possessed after he moves into his new home, blacking out and painting a Satanic portrait of children suffering. These children want to be set free by Jesse's painting, but it's unclear whether or not that puts Jesse in league with divine powers or Ray Smilie (Pruitt Taylor Vince), a creepy, overweight killer who stalks Jesse's family because he suffers from similar visions.

This scenario is the kind of pulpy Satanic Panic-era narrative you might have seen in the '80s or late '70s. Nevertheless, "The Devil's Candy" doesn't feel like an homage to earlier films. Embry's performance grounds the movie whenever it threatens to devolve into grisly, punishingly grim violence. And Byrne, whose script is more focused and more sensitive than his previous feature, wisely emphasizes the psychological conflict that Jesse experiences as he considers, without the aide of his wife Astrid (Shiri Appleby) and daughter Zooey (Kiara Glasco), how to protect his family.

I've foregrounded Jesse's identity as a father and not just a parent in crisis because Jesse's sexuality and gender is always performed for viewers. For starters, the way Embry's body is filmed situates much of his character's conflict literally on his shoulders. He has a Christ-like beard and washboard abs that bring Matthew McConaughey (circa "True Detective" season one) to mind. He has a tattoo of a spinal column along his back, which only further draws our eye to how muscular and flab-free his frame is. He also frequently paints without his shirt on, and at one point strips to his tighty-whities. Watching Embry in action, I was reminded of Matthew Barney, an outre mixed media artist whose "Drawing Restraint" series imposes physical limitations/challenges on the artist: painting with one hand behind your back, painting while bounding up and down, painting upside down, etc.

The main difference between Jesse and Barney is that Jesse is not a Norman Mailer-crazed bohemian, but rather a sensitive father figure who just happens to love heavy metal music and has raised his daughter to love Slayer, Metallica, and others. Jesse smokes pot, but begrudgingly paints butterflies on commission for a bank. He tries to get recognized by art dealer Leonard (Tony Amendola, sporting a devilish-looking beard). He talks to his family, and is man enough to apologize when he doesn't show up on time to pick Zooey up from school.

But Jesse, as sensitive as he is, cannot understand the part of him that sees visions of children being tortured. Byrne wisely draws a distinction between scenes where Embry is in control of his art—his eyes filmed in close-up as he scans his canvas—and when he's haunted by a muse/inspiration that he can't quite put his finger on. "The Devil's Candy" is therefore not just about Jesse's quest to defend his family from an intruder: it's Jesse's attempt at bridging the gap between his dark imagination and his role as Zooey's dad.

At this point, I have to tell you: I find the premise of "The Devil's Candy" a little hard to swallow. This guy looks like he spends a minimum of three hours per day in a gym without wiping down the weight machines after he uses them: how tormented could he be? His physique is such a huge part of his character. Just compare Embry and Vince's respective appearances: Embry is in peak physical condition while Vince is an infantilized adversary who eats candy and waddles around in a red track suit. Jesse may worry that he's in league with Vince's demonic servant, but anyone with eyes can see that these two men are not cut from the same cloth.

Still, I found myself captivated by "The Devil's Candy" because of how well Embry conveys his character's angst-y struggle to understand himself. The film would not work without a strong lead; thankfully, Embry is strong enough to carry "The Devil's Candy." I was similarly impressed with Byrne's focus on his characters, and skill at making a movie about one man's internal conflict feel ambiguous enough to be compelling. The last shot of "The Devil's Candy" packs a punch because it reminds viewers that we never really know what drives Jesse. Here's a character whose otherwise rote "Am I a man or a monster?" struggle actually feels consequential. With "The Devil's Candy," Byrne confirms his status as a filmmaker to watch. 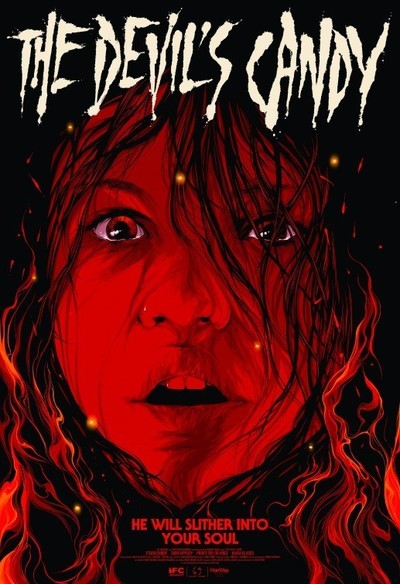