If "Paranormal Activity" and "Saw" dated, mated and had a tech-age scary movie baby, it would probably look something like "The Den". But unlike the first entries in those two long-running horror franchises, this potentially absorbing variation on found-footage scares too quickly devolves into a series of creaky slasher-flick clichés that hail from the pre-digital era of "Halloween" and "The Texas Chainsaw Massacre".

The only real change nowadays is that the camera shakes far more than fright-seekers in the audience since they have seen so much of this before.

It is too bad "The Den"—which refers to a web-cam chat site based on a service called Chatroulette, where you can switch from user to user randomly—doesn't better capitalize on its somewhat nifty setup. Helping matters considerably is debut director Zachary Donohue's choice of leading lady as his heroine, Elizabeth. Melanie Papalia looks like "Glee"'s Lea Michele and acts just the way you'd think a privileged Millennial grad student would if they convinced someone to give them a grant to study web cams for a social media thesis. She's smug, overconfident as heck and more than a little into interacting with others from a distance.

I also admire any woman who bothers to wear lipstick even though she works from home.

Basically, Elizabeth is getting paid to sit in front of her computer all day while watching all manner of humanity from around the globe in various stages of dress and undress do everything from engaging in polite conversation and posting videos of rude puppets to sharing suggestive comments and dancing in bikini drag. Or, as one of her subjects tells her, "Good luck with the whole Jane Goodall thing."

Except for the lack of cute animal clips, this is what most people do for free.

Speaking of which, I found that watching "The Den" on my own computer actually became a cool meta experience since it appeared as if Elizabeth's screen was my screen. Because of being tied to her project 24-7, she communicates to her boyfriend, her friends and pregnant sister almost exclusively through some kind gadgetry, which gives her every relationship a voyeuristic vibe. But the effect soon dissipates once her computer is hacked and suddenly it appears she is witnessing an actual murder taking place.

That is when the stupid and convenient portion of the plot kicks in. Elizabeth calls the police but they fail to investigate since there are almost no details of where, when and how this killing took place. Or so they say. You'd think if they can tap into everyone's phone records, they could find this guy, but no. And the official who was behind the grant has pulled the plug after the killer uses Elizabeth's email account to send out a sex tape of her with her boyfriend. You'd think Elizabeth would get a chance to explain that she is being victimized considering how upset she sounds, but no. Eventually, more bad stuff happens and everything converges in a murky chamber of horrors with little chance of escape.

At least it's admirable that Donohue manages to do almost all his shooting with either web cams, phone cams or surveillance cameras. But that does not translate into an entirely enjoyable viewing experience. Plus, there are almost no real shocks or scares to rattle you out of the stupor that inevitably develops from observing someone else fiddle with their laptop for much of the running time.

I guess the moral of the story is not unlike what your mom used to tell you when it was a beautiful day and you whined there was nothing to do. Go outside, get some fresh air and play. Or maybe it's that the Internet is more of a device for evil than good, especially given its cover of anonymity. Certainly, when it leads to this kind of clever-on-the-surface style of moviemaking that just ends up being a time waster, you might be better off experiencing the world as it goes by in person. 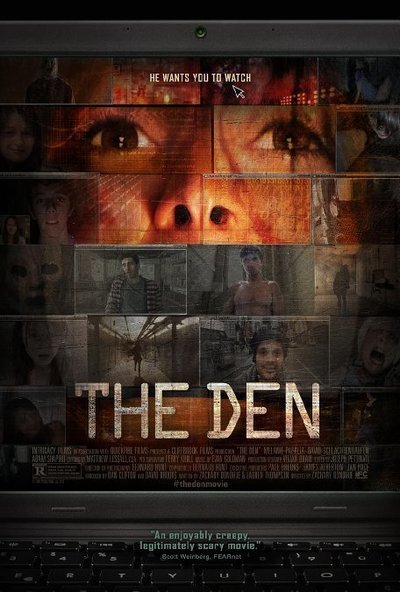