The Croods: A New Age

Seven years after the release of “The Croods,” a sequel finally emerges from the caves of Hollywood, pushing its ways into theaters in the markets where people are still allowed to go to the multiplex. Rather than drop this one on VOD like “Trolls World Tour,” Universal and Dreamworks are pushing forward with a theatrical release, even as COVID cases skyrocket. Will people strap on a mask after Thanksgiving turkey and head out to see one of the few blockbusters released this season? The business story here could make for some interesting headlines, especially if it ends up a financial loser for the company willing to risk opening it in theaters. That’s the only story that will be of interest because the movie itself is hyperactive and shallow, the kind of animated sequel that operates under a “more is better” aesthetic, hoping to numb audiences into thinking they were actually entertained. A decent first half and solid voice work throughout succumbs to total chaos for the second half and the realization that there’s almost no actual artistic intent here. No story, no character, no world-building, no design. It’s all bright colors and loud noises. You’d think we’d evolved beyond that by now.

The comparatively charming “The Croods” was the story of an overprotective caveman father named Grug (Nicolas Cage) who came to terms with the fact that his daughter Eep (Emma Stone) had to grow up and take some risks of her own, including falling in love with a boy named Guy (Ryan Reynolds). “The Croods: The New Age” opens with a brief reminder of Guy’s back story and how he became a part of the Croods’ pack, one that also includes mom Ugga (Catherine Keener), son Thunk (Clark Duke), and Gran (Cloris Leachman). Eep and Guy are starting their romance in an increasingly dangerous world. There’s a fun early montage to “I Think I Love You” as the pack avoids life-threatening situations.

Just after Grug discovers that his daughter is considering leaving the pack to start her own with Guy, the Croods stumble upon a fenced-in commune run by the Bettermans—Hope (Leslie Mann), Phil (a great Peter Dinklage), and their daughter Dawn (Kelly Marie Tran). The Bettermans are the city mice to the Croods’ country mice. They compost their garbage instead of just leaving it in the wild; they wear sandals and necklaces and man-buns; Phil even has a literal man cave to retreat to when life gets too hard. All of the civilization is shocking to the Croods, including its bananas and mirrors. Guy has an important history with the Bettermans, which leads to a sort of pack love triangle—will Guy return to the more civilized and predictable world of Dawn Betterman or roam the dangerous plains with Eep Crood?

It’s not a bad starting point, but four credited writers (plus two more credited with the story) can’t figure out how to build on it. The promising set-up gives way to shallow stakes, repeated jokes, and hyperactive visuals. For the record, I have three children under 11, so I have the expertise to say that this is one of the most headache-inducing children’s blockbusters in recent years. No one is expecting nuance in a sequel to “The Croods,” but there’s a balance between that and non-stop noise.

It doesn’t help that “The Croods: A New Age” is content to tell pretty much the same story only louder. Once again, it’s a story of fathers learning that they can’t be too protective of their daughters—Phil goes through a similar arc with Dawn as Grug did with Eep in the first movie—and an encouragement for families to stick together no matter what happens. How civilization actually separates families like the Bettermans, while being out in the wild focuses a family like the Croods into a more cohesive pack, could have been an interesting story—especially given how families are literally more apart this holiday than ever before—but “The Croods: A New Age” doesn’t really do much beyond the surface, giving the movie over to physical comedy and loud action sequences.

Every time that “The Croods: A New Age” feels like more than a generic retread, it returns to something safe and familiar. The irony is that these stories are about breaking out of a bubble—overprotective fathers who realize that the danger of the world is an essential part of growing up. If a third adventure surfaces for Grug, Eep, Guy, and the gang, one would hope that the filmmakers would take their own advice: The best movies are made by those willing to leave the pack.

For transparency’s sake, it feels important to state that this film was screened via streaming app. The intent of this review is not to encourage or discourage anyone from attending a theatrical screening at this specific time. It is an analysis of the work itself for posterity. 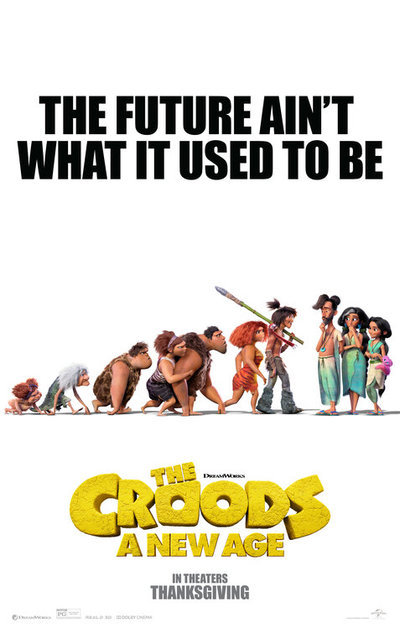