If the original “Trolls” was about the uniting power of music, “Trolls: World Tour” is about the uniting power of bright colors and constant distraction. It is aggressive in its assault on the kiddie senses. Of course, no one comes to a non-stop movie like this for subtlety, but you also don’t necessarily expect to feel you like you dunked your head in a bucket of Skittles either. The operating aesthetic appears to be turning everything about the original movie up to 11, and it should work particularly well for kids who haven’t been able to leave the house in a few weeks, even if adults may find its “what if a bulk candy store were a movie” aesthetic exhausting. They may also wish it paused a beat every now and then to do something smarter or deeper instead of just skipping like a stone across the surface of the glittery pond. But it’s not really a movie for them. It’s a movie for the kids to watch after overdosing on Easter candy, and there’s something to be said for watching a movie this unapologetically bright in a world that feels pretty dark right now.

The stars of the original, Poppy (Anna Kendrick) and Branch (Justin Timberlake), are really just along for the ride in a film designed to shove as many new troll characters at young viewers as possible. It turns out there used to be six different musical tribes of trolls—Pop, Rock, Classical, Funk, Techno, and Country. Years ago, they each ran away with their once-united musical strings and formed their own neighboring societies, but now Rock, led by the aggro version of Poppy in Queen Barb (Rachel Bloom), is trying to take back all of the music for herself, rampaging across the troll kingdom and stealing the other five strings to form one guitar to rule them all. Poppy is first convinced that she can reason with Barb but she is soon caught up in the Rock Queen’s quest for power in ways that make her realize not everyone wants to sing along to Cyndi Lauper.

Of course, the plot here is really just an excuse to introduce kids to new kinds of trolls that can be spun off into their own toys and maybe even a Netflix original series. And it’s hard to be too Scrooge-like on a film that understands that the King and Queen of the Funk Troll tribe should legally be voiced by George Clinton and Mary J. Blige, or that gives Ozzy Osbourne the chance to voice the Patriarch of the Rock tribe. There’s strong voice work throughout “Trolls: World Tour” that also includes Sam Rockwell and Kelly Clarkson as Country Trolls. And Kendrick and Timberlake are immensely likable again, just as you'd expect. Unlike a lot of major animated blockbusters, no one here is phoning it in. They’re all on the same page, even if that page is basically “wooooooo!”

There are also admittedly some strong visuals at play throughout “Trolls: World Tour,” including settings that feel more inspired by stop-motion animation than modern computer-animated fare. It’s a film designed to keep viewers of all ages from drifting back to the real world in any conceivable way. Here’s a new kind of troll! A new world! A new song! A new voice you’re going to recognize! "Who Let the Dogs Out?"! This is one of the most hyperactive films ever made, and most people of a certain age won't really care that this hyper-speed doesn't really allow for enough humor or really depth of any kind. The final act tries for heart, of course, but it doesn’t really connect, and the film is surprisingly just not that funny. It’s too constantly busy to be funny. There are new trolls to meet and new places to go! No time for jokes!

Ultimately, it comes down to what one should expect from a film like “Trolls: World Tour.” Setting aside my own moral issues with a film in which the heroes sing LMFAO and the villains sing The Scorpions, I found myself legitimately asking myself how to judge “Trolls: World Tour.” Yes, it could have been funnier and it could have been smarter. Undeniably. But it often looks great, it often sounds great, and it achieves its main goal of delivering a sugar rush to a world in great need of some intense joy right now. How this pandemic is impacting children who feel their parents’ anxiety—as well as just miss the escape of seeing their friends at school every day—is a story that hasn’t really been written yet. If those kids can get a break from the scariness of the real world by dipping their head in a bucket of cinematic Skittles for 90 minutes, what harm could that possibly do? 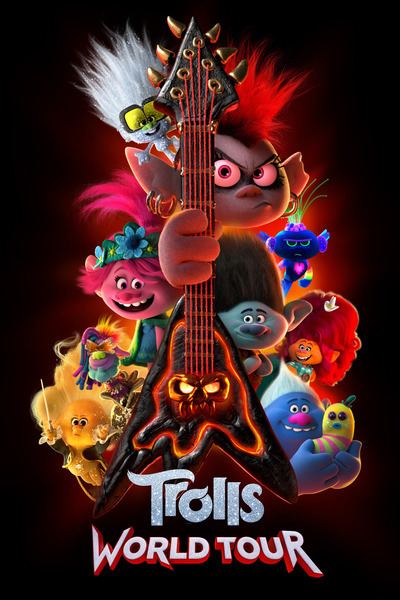