The Conjuring: The Devil Made Me Do it

There is a point in Michael Chaves’ frustrating and only sparsely scary “The Conjuring: The Devil Made Me Do It” when you realize something: if you abandon your desire to watch a terrifying haunted house movie in the vein of James Wan’s “The Conjuring” and settle for the investigative thriller that you have in front of you instead, you might have a decent time. Don’t worry, there's no way for you to miss that utterly pronounced scene, especially if you've watched a David Fincher movie or two. There is a creaky basement. A creepy old man leads the way to it. He might be the Zodiac killer (okay, not exactly, but something along those lines), and yet, someone who barely knows him follows him down all the same, just to gather some evidence around a series of murders.

Had that point never arrived, I could have more easily dismissed the third “The Conjuring” installment—a straight sequel chapter after a number of spin-offs like “Annabelle” and “The Nun” with varying degrees of smarts, skill and scares—as a horror movie that can’t be bothered to live up to its breathtaking origins. Again, this outing manages to operate as a mediocre police thriller to some degree; but one with too many suspects and incidents-within-harrowing incidents. A mysterious serial murder case emerges amid the film’s confusing tone and someone obsessed enough with its puzzling details has to voluntarily go down the rabbit hole in order to crack it.

But who the hell actually wants the new “The Conjuring” to be downgraded to a mere whodunit anyway, when its original predecessor is still one of the most brilliant and frightening horror movies of the 21st century? If you’re not that person, this film’s array of hollow jump-scares and uninteresting secrets that culminate in short-lived thrills is unlikely to impress you, despite some successful effects and elegant camerawork by cinematographer Michael Burgess. Still, “The Curse of La Llorona” filmmaker Chaves gives it a shot, directing Patrick Wilson and Vera Farmiga as they once again portray paranormal investigators Ed and Lorraine Warren wrapped up in a based-on-a-true-story case. The prologue here takes place in 1981, when the exorcism of the adolescent David Glatzel (Julian Hilliard) leaves Arne Johnson, a good-spirited young man in a loving relationship with David’s sister Debbie (Sarah Catherine Hook), haunted by the grip of an evil force. When Arne commits a horrific murder in the aftermath of the events that use one too many recognizable visual nods to “The Exorcist” (including a laughably obvious shot of a priest standing by a soft street lamp with a suitcase in hand), the Warrens slowly uncover similar crimes that took place in the area. So they embark on a quest to prove to Arne’s apprehensive lawyer that Arne was actually possessed while committing the crime. (His real-life case apparently marks the first time in the US where demonic possession was used as defense in a court case.)

Screenwriter David Leslie Johnson-McGoldrick throws in plenty of “The Conjuring” universe references into his script, including an inspired joke with Ed suggesting to introduce Arne’s skeptical lawyer to the cursed doll Annabelle to clear a few of her questions up. But ultimately, the story struggles in the hands of a strange on-and-off rhythm that almost feels episodic as the Warrens team up with the local police, knock on doors, venture out into the forest, crawl around basements, and collaborate with customary religious figures to follow the devil’s tracks. The basic idea gets overstuffed and overstretched, ultimately losing its clutch on the audience, especially when the plot ventures out to another similar murder case between two girlfriends and distances itself from the main event for long and dull stretches of time. So much that when Ed and Lorraine come to understand the witchcraft-y nature of their case, you might run out of reasons to care for their mission, or worse, forget what they were out there chasing to begin with. Things don’t improve much even after Eugenie Bondurant’s chillingly witchy Occultist shows up.

There is no denying that Wilson and Farmiga have come to portray two of the most iconic figures of contemporary horror. That familiarity, down to the Warrens’ customary sculpted hairdos and old-fashioned, thoughtfully costume-designed clothes, is both comforting and transfixing—we somehow came to want to spend time with this duo and perhaps even to feel safe in their presence. But our goodwill and sense of nostalgia for the Warrens goes only so far in this third film. One almost wishes Chaves and Johnson-McGoldrick had not tried to reinvent the wheel, and instead just stuck with the franchise’s sophisticated simplicity and tried-and-true paranormal formula. Without a focal haunted house, this one just doesn’t feel like a film that belongs in “The Conjuring” universe. 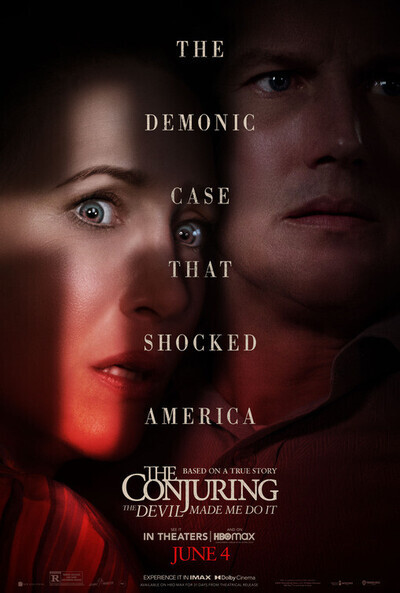