One of the first pieces of advice you’ll get when faced with social media harassment is to not engage. Don’t give trolls your time and energy. Don’t try to dunk on vitriolic bots because fighting back seems natural. Better to mute offending accounts, log off until the storm blows over, and move on. But in Ivo van Aart’s revenge thriller “The Columnist,” our hero escalates the tension by showing up to her harassers’ residences and confronting them about their actions. Then, she fights verbal violence with physical violence.

Femke Boot (Katja Herbers) is the type of feminist writer many trolls often target. Whether she writes about mundane things or political social issues, Boot is constantly under attack online, a situation that’s only getting worse. At first, she threatens to leave social media, but the hate keeps pouring in. She tries to report the harassment to the police, but no one takes her fears of online death threats and violence seriously. Soon, she’s consumed by the internet vitriol, unable to put her phone down in a warped masochistic version of doom scrolling. Her obsession with what strangers say about her online threatens her relationship with her high school daughter (Claire Porro) and a new boyfriend (Bram van der Kelen) who also happens to be a writer and understands some of what she’s going through. Finally, she snaps and takes actions into her own hands by killing her harassers one-by-one. After the deed is done, she severs off the troll’s middle finger as a souvenir from each troll who once used it to make her life difficult.

“The Columnist” plays on very real fears and some realistic scenarios. It’s sad how common the experience of online harassment is for women and people of color who become strangers’ target for merely existing on these platforms. But while the movie is rooted in some kernel of truth, “The Columnist” obviously has another agenda. When it swings into its revenge thriller mode, the character of Boot also changes. No longer is she a harried, overworked, and anxious single mom, now she’s resolute and dangerous. She’s not flawless in her violence, her kills are sometimes the result of a heated mistake yet just effective enough for her to get away with it. She might be a feminist columnist arguing for the moral high ground in articles, but when she’s screaming at various goons that they should have been nicer before she kills them, she loses that ground. In seeking revenge, she is essentially undoing the civility she is calling for because as the movie bitterly reveals, her attacks do little to silence all of her aggressors. It's a bigger problem than just a handful of people. It’s something more sinister about these platforms and the way their algorithm rewards and gamifies anger and hatred. It’s how you can spend all day reporting attacks and offending characters, but the scions of social media will do little to actually help targets of these harassment campaigns. The movie, of course, isn’t interested in these big picture systemic ideas or even naming the misogynist attacks Boot endures. It’s all just fodder for the movie’s real purpose: bloody retribution.

In the end, Van Aart’s “The Columnist” has surprisingly little to say about online violence against women. It expands a little more on the idea of how these seemingly insignificant messages can silence a woman’s voice, and in the experience of Boot’s daughter, Anna, how established male authority figures like her principal can also muzzle her opinion. But the movie’s singular focus on Boot’s quest for revenge discards many of the other issues in the movie for cheap thrills. The scenes are horrific in nature, but not particularly memorable. Neither van Aart or cinematographer Martijn Cousijn make these scenes particularly tense (until the ending’s last two confrontations) or stylish. If van Aart wanted to go for a lurid tale of a columnist seeking revenge against her tormentors, why visually hold back from that premise? “The Columnist” hits more like a one-note horror movie, less intellectually deep than its original introduction.

Now playing in virtual cinemas and available on VOD and digital platforms. 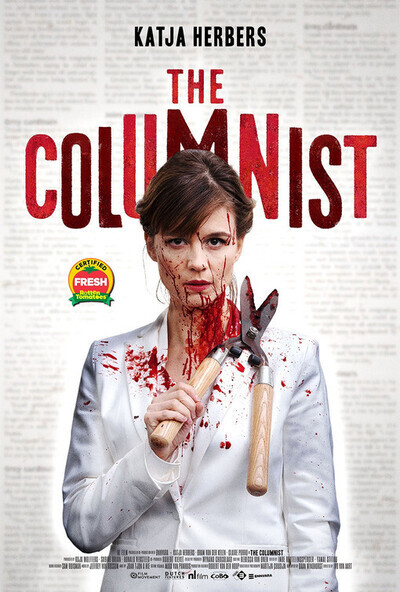