Even before millions of viewers made it one of Netflix’s most successful films ever, there was some magic behind Clay Kaytis’ “The Christmas Chronicles.” Envisioning Santa Claus as a Kurt Russell-like figure (played by the man himself) proved to be an inspired choice, especially with the family-friendly action-comedy introducing a version of Kris Kringle who is all-knowing and straight-talking. The Christmas cheer that Russell’s Santa spread with the help of a brother and sister was like an invitation to see the bright side of life, and the wizardry behind it all was as sly as a wink from Santa.

The good news for everyone awaiting the sequel is that new director Chris Columbus, a family movie heavyweight in his own right, doesn’t mess with that mix of heart and holiday that made the original so rewarding. (Plus, this sequel has an even bigger impromptu musical number than the jail cell light show from the original.) But the bad news, I’m sorry to say, is that "The Christmas Chronicles 2" doesn’t contribute much that's worthwhile to the first movie's blueprint, and focuses on mildly amusing indulgences—more elf-centric shenanigans, more Santa mythology, more roller coaster sleigh rides. Even though it succeeds at staying busy, "The Christmas Chronicles 2" opts more for chintzy spectacle than the inspired touch that made the original so special.

Before the story takes us back to the North Pole, we catch up with the brother and sister from "The Christmas Chronicles," who seem to have exchanged attitudes. Former car thief Teddy (Judah Lewis) is now a happy-going optimist, especially after experiencing a type of conversion after helping save Christmas with his younger sister, Kate (Darby Camp). Kate might be a legend in the North Pole for her heroics with Santa's elves in the first movie, but now she’s become bitter that her mom Claire (Kimberly Williams-Paisley) is cozying up to a new man named Bob (Tyrese Gibson) who she fears will make everyone forget her deceased father. Even worse in her mind, she’s not even back home in Massachusetts for Christmas, she’s in the anti-snow terrain of Cancun, Mexico where Christmas seems farther in her mind than ever.

Kate plans on ditching the resort for an airport shuttle, but finds herself at the North Pole with Bob’s son Jack (Jahzir Bruno) in tow when she is tricked into a golf cart ride to the airport commandeered by Belsnickel, an evil elf-turned-human, who throws them into a portal that sends them to the North Pole. Belsnickel needs help getting access into Santa's Village so that he can enact his evil plot of destroying the Christmas star that powers the land and makes Christmas possible, and to use biochemical warfare to turn all the elves naughty. The script by Columbus and Matt Lieberman is so convoluted that we only get to that main evil scheme about 50 minutes in, as they opt to dump a whole bunch of mediocre backstory about the origins of Santa and the elves who populate his worker metropolis, Santa's Village. Once the adventure finally does take off, the writers complicate the story with a quest to save Christmas light and a mission to save a dying reindeer's life, underwhelming subplots that are too touch-and-go to feel pressing.

Whereas the major obstacle in “The Christmas Chronicles” was about converting non-believers—with a playful nudge and positive message—this sequel is about a downer of a subject, a hater and former elf named Belsnickel. Played by Julian Dennison (a breakout from “Hunt for the Wilderpeople”), he’s angsty at Santa Claus and Mrs. Claus for giving him less attention when he was an elf, causing him to act out until he took human form, and ditched the North Pole. Even for a designated party pooper, Belsnickel is a major buzzkill, skulking around like a Yuletide terrorist, and Dennison doesn’t get much from the script except scowls and dialogue like "Humans suck! Elves rule!". His scene directions of suddenly appearing out of nowhere or randomly flying away start to become the jokes that the script doesn’t naturally give him.

Casting Russell as Santa Claus was a great reference to Russell's star persona, and that continues with casting Goldie Hawn as Mrs. Claus. She has a much bigger part here than her finale cameo in the first movie, and she maintains that affable holiday spirit, even if she's on the sidelines throughout. There's something warming to how the presence of Russell and Hawn is like a celebrity cameo in a holiday special, in which the line-reading is certainly not very fussy, and it's more about smiles and moving the story along.

Aside from an ongoing bit about possibly renaming Santa’s Village to Mrs. Claus’ Village, “The Christmas Chronicles 2” is oddly light on big laughs, one of this movie's stranger problems. That feels correlated to how Russell is more of a host in this round, having to share the spotlight with all of the elves who don't have a strong collective personality, and simply make for their Minions-grade jokes. The movie gains so little momentum from its sugar-rush aesthetics, and yet it also seems wasteful. Why include a professional goofball like Tyrese Gibson if you're going to limit him to three brief scenes?

"The Christmas Chronicles 2" has some intriguingly bonkers plot developments, like a sudden time travel detour or a game of chicken between two sleighs in the sky, but its main contribution of mixing in battles with the Christmas spirit is where the script runs charmless. Take Jack’s subplot of fighting naughty elves, which is presented like a parody of war, slow motion explosions and all. For good measure, he is armed by Mrs. Claus with a gingerbread cookie grenade and a Nerf gun that would have been handy in “American Sniper.” Toys for Tots donation drives have the better idea—they don't accept weapons, because gun violence isn't playtime. In a story like this, it's just lazy.

It's hard not to keep thinking about the first film when watching "The Christmas Chronicles 2," especially as this one tells us origin details that don't enhance our belief in Christmas' importance, so much as make this cluttered sequel seem more grandiose than it actually is. The Christmas spirit, and the story behind it, is given a far more literal treatment here, and it weighs the now-franchise down. Sure, it’s kind of cute to see Santa's wholesale "Lord of the Rings"-like origins, but "The Christmas Chronicles 2" risks giving away the magic due to its own lack of imagination. 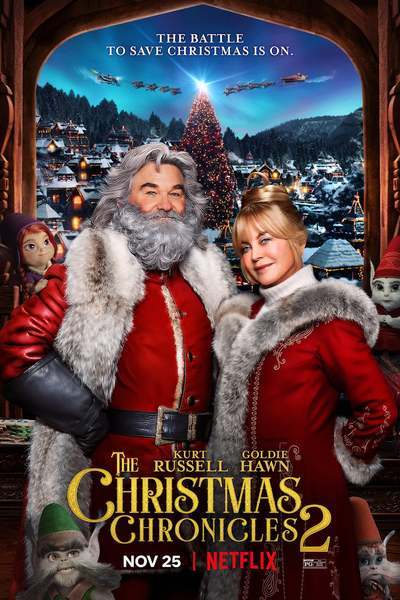