Darling puppies, tinkling seashell wind chimes, meaningful gazebos and, as always, a drenching rainstorm that ensures the sheer top worn by the lead actress is fully soaked and see-through.

Another year, another return to the daffy romantic outpost of Sparks-landia, a place that often claims to be on the North Carolina coast but one where logic does not apply, fate is more fickle than usual and every nature shot feels like a photoshopped postcard. This fantasy oasis, of course, is based on the best-selling books by Nicholas Sparks. Much like the “Twilight” series or “50 Shades of Grey,” they will hardly be confused with the works of Virginia Woolf or Philip Roth.

Instead, they are targeted for a specific audience that finds pleasure in escaping everyday life with tales of passionate, primarily white-bread love affairs fraught with an obstacle or two that tug on heartstrings while not taxing the brain. Nothing wrong with that, says someone who has read far too many Sophie Kinsella and Jennifer Weiner books for her own good.

But what might seem innocent enough on the written page is often downright silly if insulting on the big screen. That is most certainly the case with No. 11 of these film adaptations, “The Choice,” whose greatest sin is a conclusion that totally trivializes one of the hardest decisions a family member can face. No spoiler here, but if you have seen an ad or a trailer, you can pretty much surmise what the “choice” is.

It’s always interesting to see who they recruit to helm these efforts, since they barely require an auteur’s vision. In this case, it is Ross Katz, a co-producer on two movies Oscar-nominated for Best Picture (“In the Bedroom,” “Lost in Translation”) as well as the director of HBO’s “Taking Chance.” He either drew a short straw or owes someone a favor.

Casting is often key in making this sort of branded mush at least somewhat palatable, a standard set by the “Citizen Kane” of Sparks-landia, 2004’s “The Notebook,” which showcased soon-to-be major stars and one-time, real-life couple Ryan Gosling and Rachel McAdams. But “The Choice” totally botches its central pairing, to the point where you might find yourself hoping the blandly irksome twosome fail to even get together. Whenever they indulge in sweet talk by saying to one another, “You bother me,” it’s difficult not to shake your head in agreement.

Our hero is Travis (Benjamin Walker, best known for starring in “Abraham Lincoln: Vampire Hunter”), who is first seen arriving at a hospital via a boat with a bouquet of flowers and a melancholy demeanor. Flash back seven years when he apparently was Wilmington’s most eligible bachelor, using his watercraft as a pick-up vehicle to impress the ladies. When an old high-school squeeze with goo-goo eyes swings by, he leaves his two married male buddies adrift while he goes off to a bar with her.

Yes, Travis is sort of a jerk, an assessment re-enforced by how he throws rather loud beer and BBQ parties on his front lawn for his friends and then blasts Ram Jam’s “Black Betty.” He doesn’t even try to placate his peeved yet pretty new medical-student neighbor Gabby (Aussie actress Teresa Palmer) as she huffs and puffs in disgust from her porch. But then her dog, Molly, becomes pregnant and she rudely accuses Travis’ pooch, Moby, of being the culprit—a situation that is oddly compared twice to the plot of “Dirty Dancing.”

Turns out, Moby is neutered, Travis is a veterinarian and when he offers to help with the newborn pups, Gabby’s resistance to the boy next door begins to melt. Too bad she already has a doctor beau who is built like a human Hummer. Will he go off to a medical conference? Yup. Will Gabby and Travis stop bickering long enough to hook up? Yup. Will Travis get a well-deserved punch in the nose? You know it.

Here’s the deal. There is a moment where Gabby reveals that she believes in God and goodness to faithless Travis, yet she doesn’t hesitate to cheat on the guy who wants to marry her and have her join the family practice started by his physician father. In fact, she doesn’t even tell him about the situation until forced to do so. How can we be happy for her and Travis when she is so casually thoughtless?

Nonetheless, wedding bells will chime, children will come along and then, BAM, a bad thing will happen because this story is set in Sparks-landia. But what do you expect from a movie that uses pregnant bellies to denote the passage of time, employs cellphone messages to signal major turning points and resorts to a cheap fake-out involving a cemetery?

Before we take our leave of Sparks-landia, allow me to lament the inclusion of one cast member who has been a favorite of mine since “The Full Monty.” Every Sparks outing needs an older and presumably wiser counterpart to the more youthful lovers and, in this case, it is Tom Wilkinson as Travis’ widower dad and fellow vet. The British actor’s duties here—tending to sick lizards, gently flirting with a canine patient’s owner, overseeing a church choir’s rendition of the Joe Cocker version of “Feelin’ Alright”—barely require someone of his caliber. I was, however, puzzled by one element of Wilkinson’s performance: If Travis has such a strong good ol’ boy drawl that he practically spits out grits, why does his father sound like someone suppressing an English accent?

You, too, have a choice to make while looking for diversions this weekend. Unless you desperately want to hear the football term “take a knee” associated with a marriage proposal, seeing “The Choice” should probably not be on the list. 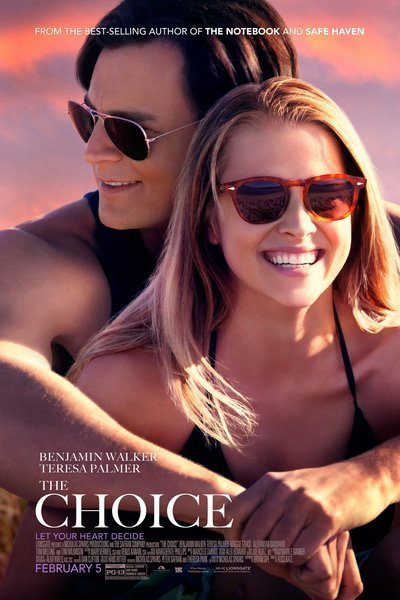 Rated PG-13 for sexual content and some thematic issues.