"The Case Against 8," opening in limited release theatrically before an HBO debut on June 23, 2014, bears no pretense of objectivity. Look at the title. While it may not present "both sides of the story," it thoroughly fulfills the promise of its title in presenting the legal battle against Proposition 8, the attempt to ban same-sex marriage in California. With remarkable access to the plaintiffs and legal team over the course of the five-year battle for equality, "The Case Against 8" starts as a relatively straightforward historical document about the specifics of the case but becomes something much deeper, and more emotional in the telling. As so often happens with stories of international importance such as the Supreme Court ruling on Prop 8 and the Defense of Marriage Act, we often lose sight of the men and women involved. "The Case Against 8" beautifully reminds us of the human beings who opened up their lives to the world and became representatives for one of the most important movements for equal rights this country has ever seen.

In May 2008, the California Supreme court legalized marriage for same-sex couples. 18,000 couples were married over the next few months but the backlash was almost immediate. By November of that year, a proposition was on the ballot to define marriage exclusively as being that between a man and a woman. As the country celebrated the election of Barack Obama, Prop 8 passed with 52% of the vote, resulting in a state amendment and the dissolution of thousands of partnerships in the eyes of the law.

The response was as swift as those who mounted the Prop 8 campaign. Activist Chad Griffin formed the American Foundation for Equal Rights and a chance meeting brought aboard one of the most important allies in the case against 8, Ted Olson, the former solicitor general under President George W. Bush. Olson was the man who argued one of the most important cases in decades, the one that determined that Bush would become President over Gore when Florida proved they were generally incapable of determining who won their state’s delegates. Getting a conservative icon like Olson on the side of the case against 8 was a galvanizing, attention-grabbing move that proved to be the right decision. Olson is a passionate, stunningly intelligent man, who happens to be a conservative that believes in not just the legal cause for gay marriage but that all loving couples have the right on a moral level as well. His closing argument in "The Case Against 8" is one of the most passionate and moving I’ve ever heard. Watching Olson depose witnesses to such an intellectual degree that he sometimes turns them from "Yes on 8" supporters to his cause is one of the film’s great joys. Gay rights are often presented in film as emotional, moral causes, but Olson proves that they’re intellectual, legal ones as well, often by turning their opponents’ own logic against them.

Who better to work with Ted Olson than the man who opposed him in Bush v. Gore, the equally impressive David Boies? And now they needed plaintiffs. After the kind of interview/vetting process that is a key part of most political campaigns, enter Kris Perry & Sandy Stier and Jeff Zarillo & Paul Katimi. "The Case Against 8" directors Ben Cotner and Ryan White never lose sight of the legal drama that’s unfolding but perfectly place it in a foundation that’s relatably human. We meet Kris & Sandy’s sons, who had to each individually agree to be a part of the case before their mothers would place that spotlight on their family. And we spend a lot of emotional time with Jeff & Paul, two men who just wanted to live their lives together but became focal points of an entire movement. One easily loses sight of how much pressure they must have felt to represent gay marriage as a whole. What if they had lost?

As we all know, they didn’t. And "The Case Against 8" feels like a victory speech. It’s a well-made, moving, informative history that I first worried was too soon to tell; historical documentaries often require a bit more time from the key events to really place them in context. However, as the final act of this HBO film proves, we’ve come an amazingly long way since that day in 2008 when men and women voted against gay marriage. There’s still a long way to go but "The Case Against 8" deftly and emotionally chronicles one of the most important legs of this journey for equality. 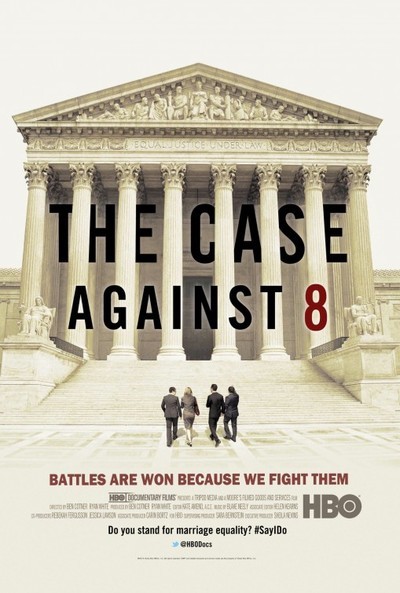