The Bradys at 4222 Clinton Way are caught in a time warp. For them, it's always the early 1970s, and dad Mike in his polka dot ties and mom Carol in her orange Formica kitchen (well-stocked with salt, sugar and white flour) like it just that way. They're raising their bunch in happy harmony, and hardly a day goes by without dad sharing one of his optimistic little homilies about life: "Alone, we can only move buckets. But together, we can drain rivers!" It is the nature of sitcoms to seem trapped in time. We channel surf, and Lucy and Desi and Ralph and Alice are still firmly at home in the 1950s, in those apartments we have come to know like our own homes. And the Bunkers are still at it, in their living room, and so is the Cosby family; the topical jokes don't seem dated for them, and their fashions never seem out of style, and it is forever 1954, or 1981.

The joke in "The Brady Bunch Movie" is that time has marched on for the rest of the Bradys' neighborhood. While the Bradys blissfully exist inside their bubble of the 1970s, the neighbors eye them suspiciously - and sometimes with outright hostility. For the first time in the movie we finally meet the Ditmeyers, their neighbors.

Mrs. Ditmeyer has a drinking problem and lusts after the older Brady boys, and Mr. Ditmeyer (Michael McKean) has erected a spite fence to block out their annoying activities. When little sister Jan (Jennifer Elise Cox) ventures next door, he snarls: "Hey, kid - go yodel in your own backyard! Hop back on the Swiss Miss package where you belong!") Of course, she's only there to warn him about the live electric wire that has fallen in his driveway, so is it her fault if he picks it up? Certainly not! And one of the running jokes in the movie is the unconscious passive hostility the Bradys unleash all around them: They're so wholesome, so darn nice, they don't even realize they are driving people mad. (And they're so plastic, do they even have human bodily functions? One neighbor who has actually seen the inside of their house suspiciously tells a friend, "I didn't even see a toilet.") The plot is made-up of the bits and pieces of what might have been sitcom storylines. The Bradys overlooked paying their real estate taxes, and now they stand to lose their idyllic home on Clinton Way. For the neighbors, that's just fine; Mr. Ditmeyer has plans to raze the neighborhood, and all of the other homeowners are blissful about the prospect of selling out and making big profits on their homes. But not Carol and Mike Brady (Shelley Long and Gary Cole). They want to stay right where they are.

Innocent of the forces amassed against them, the Bradys wonder how they can raise $20,000 in a week, and the kids pool their lunch money and discuss fund-raising schemes. Nothing seems to work until they learn of a talent contest with a $20,000 first prize and enter it, as a sort of 1970s Partridge Family singing group, dressed like refugees from ancient reruns of "American Bandstand." A lot of the humor in the movie comes from the burning jealousy Jan feels for her popular older sister, Marcia (Christine Taylor), with her long blond hair that must be brushed 5,000 times every morning. In her restless dreams, she whacks off Marcia's flowing locks with kitchen shears, but even then Marcia is the winner, as her parents compliment her on how great she looks with her new shorter style. ("It was MY idea!" Jan screams her nightmare. "MINE!") Meanwhile, Marcia's so innocent she invites her best friend for a sleep-over, and doesn't recognize a lesbian pass ("Sorry . . . I thought that was my leg!").

There are also lots of jokes about how the parents are slightly adrift from the grim mainstream of modern life, with their sunny values, blind optimism and blinkered view of the harsh 1990s realities all around them. The director, Betty Thomas, is best when she is establishing the bland, seamless, plain vanilla cocoon that protects the Bradys from bad news and evil influences.

Unfortunately, the movie itself seems to lean too far toward the Brady vision. Even its "modern" side is too innocent. The film establishes a bland, reassuring, comforting Brady reality - a certain muted tone that works just fine but needs, I think, a bleaker contrast from outside to fully exploit the humor. "The Brady Bunch Movie" is rated PG-13, which is a compromise: The Bradys themselves live in a PG universe, and the movie would have been funnier if when they ventured outside it was obviously Wayne's World. 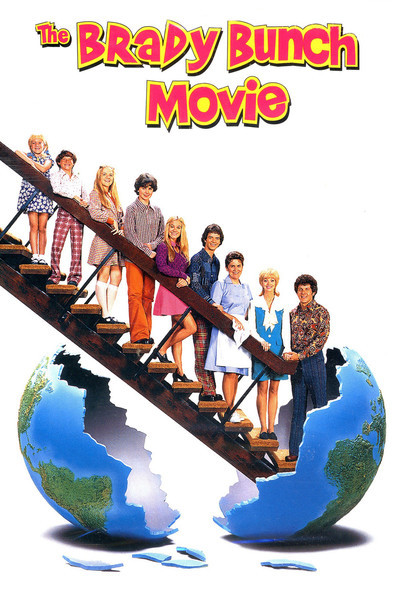