The Boy Who Harnessed the Wind

“The Boy Who Harnessed The Wind” tells the true story of William Kamkwamba; the young Malawian genius who built a windmill entirely via DIY methods in the early 2000s, to save his family and village from drought and famine. World-premiering at the 2019 Sundance Film Festival earlier this evening, the Oscar-nominated actor Chiwetel Ejiofor’s skilled directorial debut is as inspiring and morally upright as you’d expect from a film with such rousing source material drawn from real life. While thoroughly traditional with familiar beats of an exceptional child, his disapproving father and an eventual resolution that unites generations, Ejiofor’s movie eloquently harnesses all these customary elements and yields them into an irresistible family film that plays like a brand-new “October Sky” with an urgent human-interest dimension at its heart.

While good natured and comfortingly conventional, “The Boy Who Harnessed The Wind,” adapted from Kamkwamba’s autobiography by Ejiofor, is far from a forgettable, paint-by-numbers child prodigy film. This is thanks in large part to Ejiofor’s loving attention to the region’s cultural and geographic specificities and refusal of downplaying the hardships that slowly and fatally fatigue Kamkwamba’s village in Wimbe; qualities that also elevated Mira Nair’s accomplished and similarly-themed “Queen of Katwe”. More than anything, Ejiofor treats his film not as a fairy tale, but as a life-or-death survival story. He sees the mostly self-taught teen William (Maxwell Simba, in an impressive breakthrough performance) on equal footing with the hard-bitten heroes of sea and space adventures, equipped only with smarts and a will to rise above the hostile conditions that surround him. Through the sun-baked, dust-covered colors of the territory vividly shot by Dick Pope, “The Wind” sympathetically traces and builds William as he tackles the endless string of problems in front of him one at a time.

We first meet William in 2001 as a curious-minded schoolboy with a love of electronics. He fixes town folk’s broken radios to help out his family financially and spends much time in the village junkyard, collecting parts to build batteries and other necessary devices. When unreliable weather and a land dispute threaten the crops and the longevity of their family farm, the Kamkwambas fall short of the funds to support William’s education at a local school. But the now dismissed, ever-ambitious William, with a cheeky threat to expose his sister Annie’s (Lily Banda) secret love affair with the school tutor Mr. Kachigunda’s (Lemogang Tsipa), cuts a deal with his teacher to use the school’s basic library in his own time. There, he meets the 8th grade American textbook Using Energy that would change the course of his and his town’s life.

Throughout “The Wind,” Ejiofor paints a multifaceted portrait of William’s world. Inside his home, we observe what he sees and hears through doorways and windows—commonplace familial disagreements and one-upmanship between relatives, fretful financial discussions, the aforementioned forbidden affair, a loyal dog that would follow him to death, and so on. Outside, Ejiofor attentively places the Kamkwamba Farm into social and political context without ever abandoning our young hero. The corruption amid unsympathetic, power-hungry figures come into sharp focus during a political rally that quickly turns bloody. And then the draught begins, ruthless looters loom around and a grave case of famine takes over William’s village—the heartbreaking aftermath of which Ejiofor doesn’t sugar-coat. In the midst of this grim crisis sketched in detail, we desperately root for William’s success to convince his stubborn father to give up his bike, the parts of which could be used in his windmill project. “The Boy Who Harnessed The Wind” is one of those true-story films that genuinely earns the inevitable, climactic triumph in its finale. Some might call it predictable, but William—who in real-life worked on numerous subsequent sustainable energy projects and graduated from Dartmouth College in 2014—leaves an undeniably powerful impression in the end, standing tall and proud on something amazing that he built. Something our kids can and should look up to.

This review was filed from the Sundance Film Festival on January 26th. 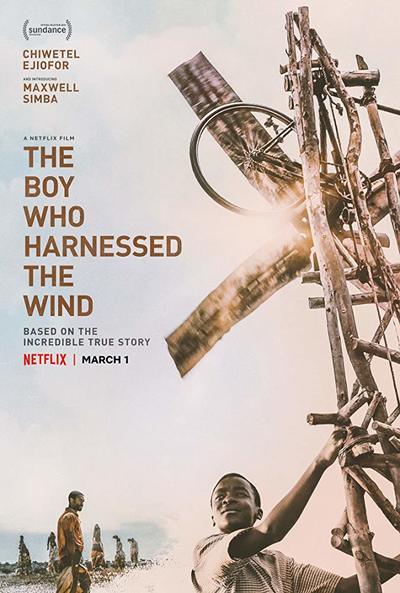