Director Mira Nair introduced her thoroughly crowdpleasing “Queen of Katwe” on Saturday night at the Toronto International Film Festival by quoting the slogan of a film school she has founded in Uganda, where she lives: “If we don’t tell our own stories, no one will.” That sense of ownership and authorship permeates “Queen of Katwe,” elevating it above your average feel-good biopic and allowing its message to feel not only inspirational but genuine. The story of Phiona Mutesi is a fascinating one on its own, but what could have just been an extended “30 For 30” feels lived-in, compassionate and truthful. It helps greatly to have not only Nair’s clear love for her country guiding every decision but also the amazing depth of David Oyelowo and Lupita Nyong’o to ground it from most of its sentimental clichés. Some of the dialogue in the final act feels a little false and manipulative, but those scenes stand out because it’s been so believable up to that point.

The nuanced, subtle newcomer Madina Nalwanga plays 10-year-old Phiona Mutesi, a young lady who lives in the slum of Katwe in Kampala, Uganda. She has almost no possessions, can’t read and sells maize in the street to try to scrape together change for her family, which includes two brothers, a sister, and her headstrong mother Harriet (Nyong’o). Phiona and her oldest brother Brian (Martin Kabanza) cross paths with a local sports ministry head named Robert Katende (Oyelowo). Recognizing that the slum kids he’s working with aren’t going to compete at football, he decides to teach them something he mastered at a young age, the art of chess. It’s a game that equalizes issues of class, education and income. It can be played by anyone in the world, and Katende soon realizes that this young girl from Katwe has a special gift, especially when she starts beating him.

It’s to be expected that the education segments of “Queen of Katwe” include a number of nods to how the game reflects Phiona’s life, but the execution doesn't feel heavy-handed. Nair is confident enough in her characters and the story she’s telling to avoid the pitfalls of repetitive lessons. So we get the idea that Phiona likes the act of “Queening” because a pawn makes it all the way across the board, against all odds, and becomes a Queen. We don’t hear it 15 times like we would in a lesser film. When Katende explains the idea of finding a “safe space” whenever your opponent is on the offensive, it’s easy to translate that to Phiona’s real life but the movie doesn’t hammer it in. This subtle touch is undermined a bit in the final act as issues of Phiona’s success and class conflicts start to tear the family apart in a way that feels manipulative and melodramatic, but Nair recovers by the end.

Two of the reasons she manages to get the film back from the edge of treacle are right there in David Oyelowo and Lupita Nyong’o. The “Selma” star is as charismatic as ever, capturing the kindness of a man who saw a potential escape for a young lady and did whatever he could to make it happen. Oyelowo’s work here is subtle but so consistent. He never looks like he’s working the message of the film more than the character he’s playing. Opposite him, Nyong’o is phenomenal. She has an incredible ability to convey backstory. We believe Harriet isn’t merely a sounding board for our heroine or an emotional plot device. She feels real because of the intense passion that Nyong’o brings to her. And it’s in the subtle things, like a glance that conveys fear about her family’s future or the different tone she takes with each of her children. One also shouldn’t miss how good Nalwanga is here, giving a fluid and physical performance.

Of course, much of the credit should go back to Nair and her technical team, who capture the streets of Uganda in a way we haven’t really seen before, certainly not in a Disney film (Nair joked in the intro that it was the first Disney film set in Africa that doesn’t have a single animal in it). From the way Nair and her designer use costumes to convey economic status to how the great cinematographer Sean Bobbitt (“12 Years a Slave”) fluidly captures a corner of the world that makes it feel specific, “Queen of Katwe” is a team effort. With the combined efforts of Nalwanga, Nair, Nyong’o, Oyelowo, Bobbitt and many more, “Queen of Katwe” makes it clear that we can’t successfully tell “our stories” alone. To make them resonate, we need people this talented working together for a common goal. It seems unlikely that Phiona Mutesi ever imagined her life would one day be the subject of a Disney film. But she certainly learned that life is full of surprises. When it comes to movie surprises, “Queen of Katwe” is a truly pleasant one. 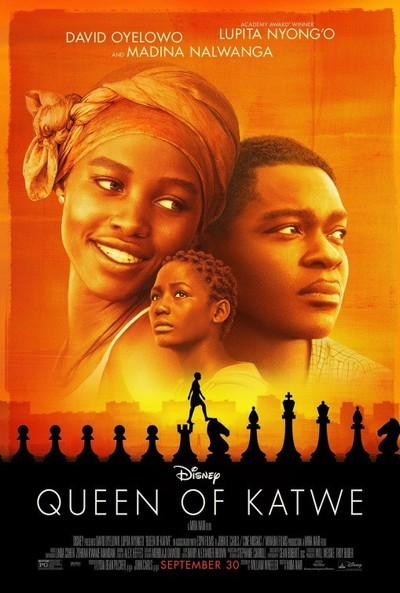 Rated PG for thematic elements, an accident scene and some suggestive material.

Writer (based on the ESPN Magazine article and book by)