“The Boy Downstairs” is not (as I, at least, feared) a sequel to “The People Under the Stairs.” That doesn’t mean there aren’t scary situations, especially for those who have experienced an awkward break-up. The title of writer/director Sophie Brooks’ feature debut instead is a twee variation on that old cliché, the boy next door, as it asks the question: What if you rented an affordable-only-in-a-movie bright and airy apartment in a well-maintained brownstone only to later learn your ex-beau resides in the basement unit? Awkward, right?

While this somewhat familiar relationship comedy mainly rooted in Brooklyn won’t bump “Annie Hall” or “When Harry Met Sally…” off the list of best Big Apple rom-coms, an appealing cast of players, crisp urban cinematography and a relatable streak of millennial malaise is unique enough to be engaging. That Brooks doesn’t feel the need to go the raunchy route (it is rated PG-13) is also a plus. Instead, her under-stated, female-forward script is heavy on honest emotions and droll humor as she traverses the minefield that 20-somethings face as they juggle career ambitions with matters of the heart.

Brooks’ wisest move was hiring Zosia Mamet, best known as the frantic and flakey Shoshanna on “Girls,” as her leading lady. Being outside the target audience of the groundbreaking HBO series, I grew weary of the constant outbursts of bad behavior shock and awe after the fourth season. But Mamet’s Diana, with her dark-rooted straw locks, black statement brows and fondness for overalls, is a more grounded and empathetic creature. Just as her “Girls” co-star Allison Williams broke free from her moody Marnie with a complex portrait of malicious seduction in “Get Out,” Mamet is able to reveal new facets to her talent with a fresh persona. She somehow makes Diana seem smart, funny and likable, even as she conveys a near-constant state of befuddlement about her choices. She is someone you want to root for, despite the fact that she is her own worst enemy.

After living abroad in London for three years while pursuing a career as a writer—shades of Carrie Bradshaw and Hannah Horvath—Diana is back and looking for a new abode. Her BFF Gabby (Diana Irvine) introduces her to Meg (Sarah Ramos), a real-estate pal of hers. The dismissive WASP has zero patience for Diana’s penchant for sarcastic rejoinders that act as a kind of litmus test whenever she meets a stranger. Handed the application form, Diana quips, “Do you think it’s an issue that I’m on parole?” Meg shrugs and moves on. Luckily, Diana’s widowed landlady and sometime actress, Amy (a delightful Deirdre O’Connor), not only embraces her as a tenant but totally gets her jokes.

The jig is up once Diana soon spies her old squeeze Ben’s name on a hallway mailbox. This summons memories of their first date—envision a rental boat on a park lake, inept male rowing and a thoughtful picnic—and is one of several flashbacks interspersed among present-day occurrences. When she actually runs into Ben (Noah Baumbach regular Matthew Shear, who comes off like a less-caustic and introverted Seth Rogen) the next morning as she is moving in, he is averse to a get-together, friendly or otherwise. Matters grow more uneasy when she realizes that he and the dreadful Meg live together.

Brooks tries to keep matters interesting with visually arresting backdrops for both present-day events and those set in the past. There is the boutique where Diana waits on demanding brides-to-be and their mothers, a rooftop Halloween costume party with Gabby donning a Marie Antoinette costume and Diana as possibly Alexander Hamilton, the opening of a friend’s ’70s throwback art installation and a meeting with Diana and her editor at Jack’s Wife Freda, a cool West Village bistro.

Three notable encounters perhaps most affect what eventually happens to Diana and Ben, who obviously care for each other and seem a perfect match. But they are never quite in sync. In the present-day, a reunion of sorts happens when they both attend Amy’s play—and Ben lets it slip that Meg has moved out. They end up at a restaurant afterwards, laughing at the Kafka-esque fact that lemon risotto is on the menu but the stuffy Italian waiter refuses them any lemons for their water. But the flirty mood gives Ben false hope that the evening will end in romance, which Diana isn’t ready for.

The crux of their problem, though, can be found in two flashbacks: First, there is Ben’s reply when, while snuggling in bed during a power outage, Diana asks him describe his vision for life. “I want what my parents have. Decades together and still being in love.” Later, we and Diana get to meet this long-wed twosome while visiting his folks for Hanukkah. When his dad declares with a wink, “We still know how to schmear each other's bagels,” you can see Diana’s upbeat mood slowly deflate. Add to that the bittersweet scene where she tells Ben that his assumption that he can visit her when she is in London isn’t going to happen, what with visa issues and such. Clearly, she wants to be free.

The story is far from over, however, after an unexpected medical-related crisis pushes them back together. It might feel like a cop-out for Brooks to leave the status of Diana and Ben open-ended. But she sprinkles enough clues along the way to allow the audience to come to their own satisfying conclusion. Any movie that can bring to mind a Joni Mitchell song as the credits roll—“Don't it always seem to go that you don't know what you've got 'till it's gone”—has earned its keep. 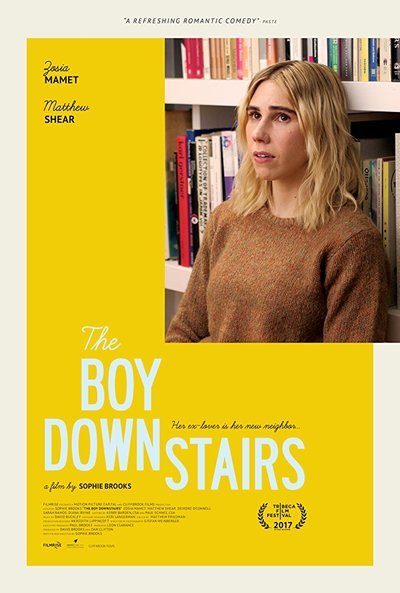