Here’s the thing about talking baby movies (and adjacent television series): sometimes they work and sometimes they don’t. Except they never really work. As much money as a stray franchise such as the (I shudder to even input these words) “Look Who’s Talking” movies might have made, none of the movies themselves are actually good. And as many seasons as “Family Guy” has yielded, Stewie Griffin will never be the icon Bart Simpson is.

I remember back in the 1990s, somebody calling me at Premiere magazine trying to pitch me a cover story on “Baby Geniuses.” I felt bad for the guy, mainly because mine was apparently the only number he could glean in his search for a Premiere editor, and I was not even vaguely in a position to award his movie a cover. So I listened to his pitch, mainly predicated on his insistence that the lip-moving technology for the babies was REVOLUTIONARY, and I nodded (he couldn’t see that, but hopefully he heard it; I wanted to let the fellow down easy).

Of course, Premiere did not put “Baby Geniuses” on the cover and of course now the movie is best known as an adjunct punchline to Paul Rudd’s immortal “Mac and Me” bit on “Late Night with Conan O'Brien.”

BUT. The movie did well enough to spawn a sequel, “Superbabies: Baby Geniuses 2,” starring Jon Voight and Scott Baio and hence something like a cinematic advance man for Donald Trump’s presidential campaign.

Four years is a pretty long gestation time for a sequel to an unworthy hit, and from the very onset of “The Boss Baby: Family Business” you can see how hard a time the movie’s creative team, such as it is, had coming up with a workable story line.

James Marsden’s adult Tim Templeton here spins another tale. In the first movie he guided us through a narrative in which his seven-year-old self was bedeviled by a younger brother who talked and wore a suit and was up to something with a company called “BabyCorp.” Now Tim’s a dad and one of his own kids, infant Tina, voiced by Amy Sedaris, is pulling the Boss Baby strings, in the name of gender equity in second-rate animated entertainments.

She fools adult hedge-fund guy Ted (Baldwin) into traveling to the suburban Templeton home by way of the same cassette-deck trick Tim used in the first film (this is some lazy writing, as you’ll learn if you ever try to buy a cassette deck) and then gives the brothers a formula that reverts them to babyhood and boyhood, so they can infiltrate a parent-upending school headed by a sinister pedagogue voiced by Jeff Goldblum.

That nobody involved in the production even bothered to suggest that this entire scenario sounded a little forced indicates everyone was too busy laughing at gags involving infants twisting each other’s nipples and uttering phrases like “performance anxiety.”

What chafes is not so much the vulgarity (although it is as relentless as it is unfunny) but the movie’s intractable infatuation with it.

One sequence, in which Tim tries to help older daughter Tabitha (voiced by Ariana Greenblatt) conquer her fear of singing, has some pleasant and imaginative semi-abstract animation. The rest is a pro forma mix of the aforementioned gags, frantic action, and “importance of family” bromides as tired as they are transparently insincere.

Now playing in theaters and available on Peacock. 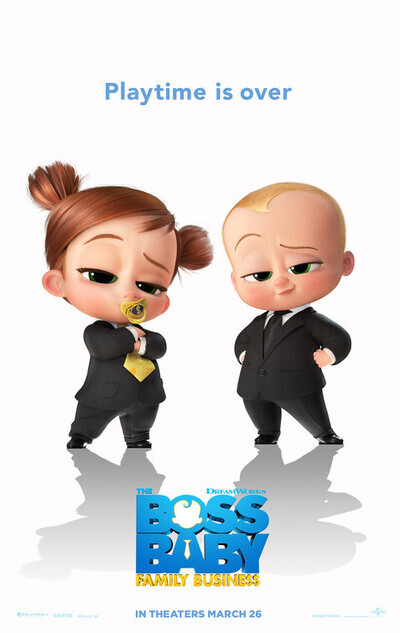